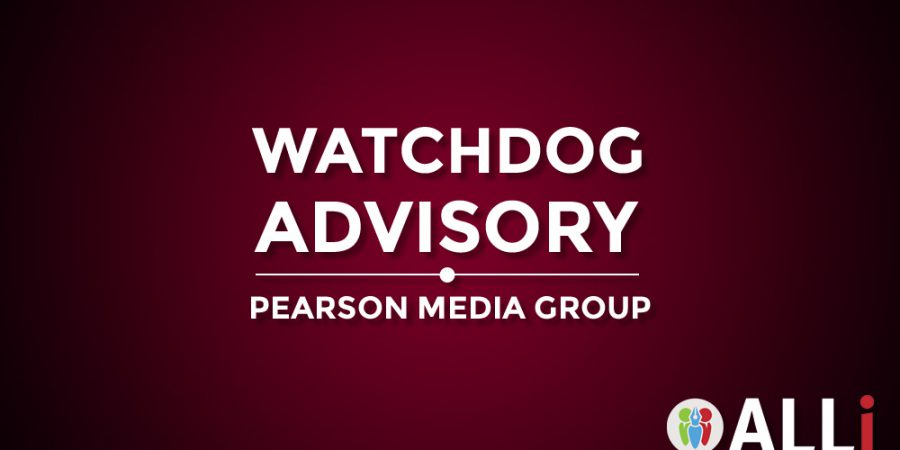 Pearson Media Group is a company that operates under more than a dozen aliases. Carter Press Marketing. Ace Media International. APM Media Production. (BookWhip, another pervasive scam, may be part of the same network of disposable business entities.) Often these aliases are chosen to create confusion with more established and reputable companies, such as Pearson UK and American Public Media.

And, following a pattern that’s been adopted by many scammers and fly-by-night vanity presses, these aliases are discarded as soon as the company’s reputation becomes too poisoned to present a convincing facade.

Pearson Media Group holds a 1-star average with the Better Business Bureau, but has paid for the BBB’s bogus accreditation to receive an A+ rating. They eagerly tout this rating on every email and social media post as proof of their good reputation. Clients who have fallen prey to their schemes would disagree vehemently.

The current Pearson email pitch promises movie deals lifted from the typical scammer boilerplate: slightly broken English asserting that they are “affiliated” with major production companies (none of which are named, and the supposed affiliation is never described); a little ego stroking about how their board of editors supposedly chose your book out of hundreds of candidates (Wow! The thousands of people who received these emails must be so honored to be selected!); and hints of the staggering wealth that awaits the author if they provide a mere 10% of the production costs… which of course, is a huge favor to the author because “we take a high risk on your book because we see quality movie material and big potential for a movie adaptation.”

There is no indication that Pearson Media Group’s staff have any experience in publishing, film production, or marketing. In fact, their website lists no staff, or any human being associated with the company. (Pop quiz: How many legitimate agencies prefer to remain anonymous?)

Pearson’s emails are signed by either Mike Suarez, Markus Torres, or Mia Allerton, names that could not be traced to experienced professionals in the industry. Torres, the alleged Senior Project Manager at Pearson, has a faceless LinkedIn account that lists Pearson as his only job experience. Allerton has a sparsely populated Facebook page devoid of photos, save a picture of the virtual office/maildrop that Pearson uses as their address. (Despite the company having existed for only four years, the profile claims she has worked there since the year 2000.) Suarez, international man of mystery, is nowhere to be found.

So, what does the author get for their $3,500.00 investment? Nothing, it seems. Pearson’s portfolio includes only three mediocre book trailers featuring the same actors and nearly identical stock audio soundtracks regardless of genre. None have been made into feature films. There is no evidence of the company or any of its aliases having licensed rights to any studio, anywhere.

But there are quite a few authors who are $3,500.00 poorer for having done business with Pearson Media Group.

Accordingly, we assign this company a Watchdog Advisory, our most severe level of rating.

Have you received a solicitation or “sponsorship offer” from Pearson Media Group? Let us know in the comments below!