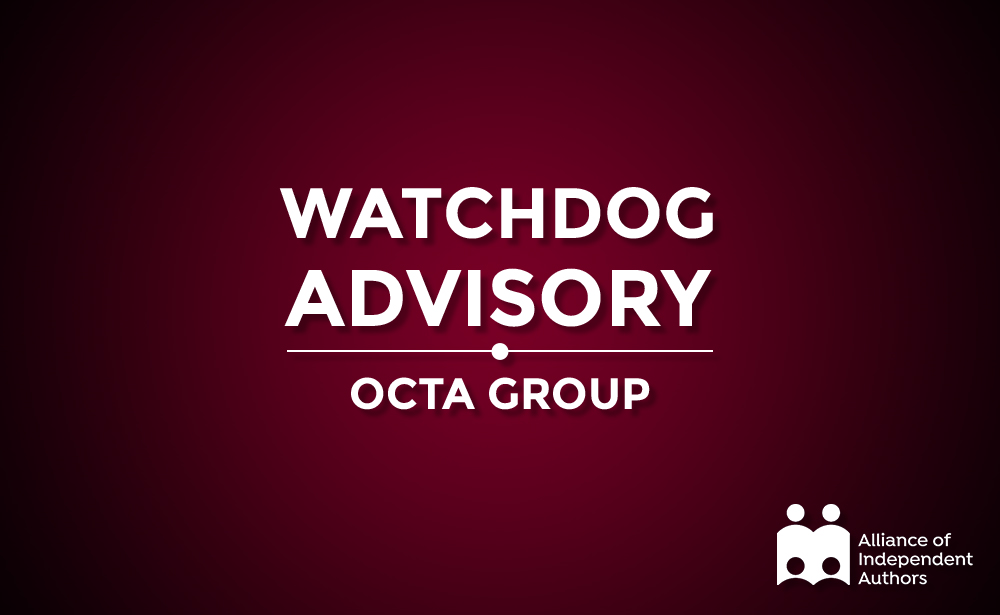 It's always a relatively new business, which somehow has dozens of glowing testimonials and reviews despite their short time in business. The website appears reasonably slick, but on closer inspection, has odd language choices and sloppy paint-by-numbers template mistakes. The services offered are usually ghostwriting, content writing, website design, and graphic design, but with increasing regularity, editing, book cover design, and publishing services aimed at indie authors.

That's nothing new, but in this case, a disturbing pattern has emerged: more than a dozen of these businesses we've examined are the same entity.

The secret lives of fake reviewers

At the time of this article's publication, the two most recent complaint of this kind ALLi received were for a ghostwriting operation calling itself The Writing Crew. The complainant reported that their books were listed as projects of the company, but they had never heard of the company before and had no dealings with them. The page contained other indie authors' works as well, and none of the authors we contacted had had any dealing with The Writing Crew. 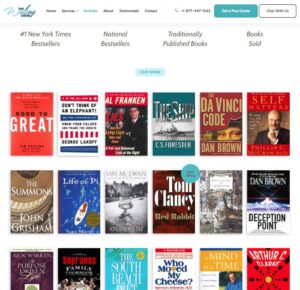 When called out, the company quietly removed the entire Portfolio page. The following week, it was replaced with a list of titles under the heading “Our Work”, including traditionally published luminaries like Dan Brown, Arthur C. Clarke, Yann Martel, and more.

Were Life of Pi (published in 2001) and Arthur C. Clarke's 2001: A Space Odyssey (published in 1987) secretly ghostwritten by a company that didn't exist until 2017? Perhaps it's my cynical nature speaking, but I'm skeptical.

The testimonials on the website raised suspicions as well, so I spent a few minutes tracking down the “happy customers” to ask about their experiences. While I was unable to reach any of them directly, I was impressed by their active lifestyles and many hobbies:

Meet Alfred H., “Technology Head” and allegedly a client of The Writing Crew. 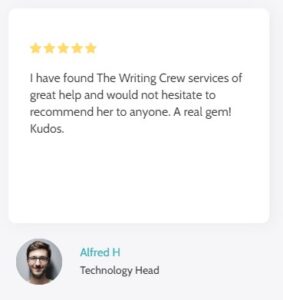 Alfred goes by “Max” on Twitter, where he's apparently a doctor.

He sells swimming pools under the name “Karl Müller” in his blogs on Medium. 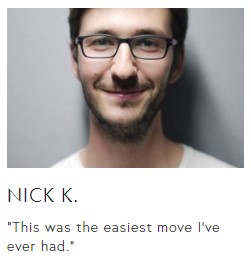 And in his incarnation as Nick K., he sings the praises of the Alcove rental app.

However, I know him as “Man Smiling Behind Wall”, one of the free stock photos available on Pexels.

Other testimonials turned up similar results: 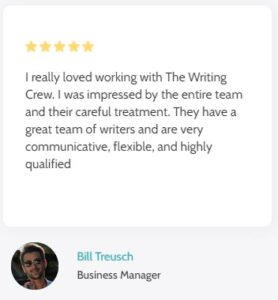 Bill Treusch has no internet footprint, but that may be because he's better known as “Men's Blue Dress Shirt”. 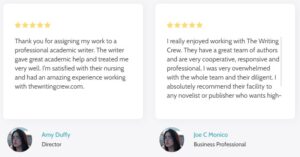 Two of the testimonials on the site were of particular interest.

First, there's an enthusiastic testimonial from “Jackson Tucker, Publishers Representative, Macmillan Learning”. Jackson Tucker is a real employee of Macmillan, but it's unlikely he had anything to do with this testimonial. (This picture is not of Mr. Tucker, nor from a stock photo site. It's a headshot of Tom Golisano, the billionaire founder of Paychex.com).

The impersonation itself is no more surprising than the other fraudulent testimonials, but it's noteworthy for its deliberate targeting of authors.

Another testimonial caught my eye for a different reason. 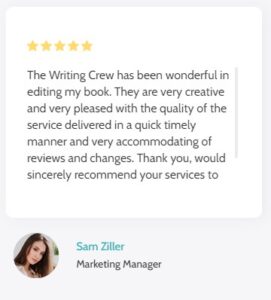 “Sam Ziller” is allegedly the Marketing Manager for a large-yet-somehow-invisible corporation. (Sam must not be very good at her job.)

Unlike the other personas invented by TheWritingCrew, Sam does have an internet footprint: she has left multiple reviews for similar companies, all of which offer ghostwriting or graphic design services.

And all of them are owned by an organization known as OctaLogo.

OctaLogo began as a web and logo design company, supposedly headquarted in Florida, with a domain registered to “Alex Walker”. Today, it's the hub of a network of dozens of fly-by-night companies.

OctaLogo fronts follow a predictable pattern. They deploy a website under one of the many domain names they've reserved, fill it with fictional testimonials and ludicrous claims, post fake reviews for it, set up a Zendesk chat system, and route phone calls to an overseas call center. Then they go to work, fleecing victim after victim. When the negative reviews start to accumulate, they shut down the website, dust off a brand new domain name, and start the process again.

What do they do?

The OctaLogo websites are WordPress installations built on the html5blank shell template, easily customized with stock photos and phony claims of affiliation with legitimate companies and individuals.

Outside of the deceptive names, fraudulent testimonials, impersonations, and fake addresses used to lure victims, these businesses employ a number of underhanded tactics to extract money from their victims. Complaints describe a common pattern of demands for more money, either by withholding the work customers have paid for until they agree to pay more, or padding the bill with charges for services that were never agreed to. A large number of complainants reported that the company never delivered the work promised, and simply took the money and ran. Several reported threats and abuse from the staff.

Although OctaLogo's various incarnations have focused largely on graphic design, web design, and search engine optimization, they have been increasingly targeting indie authors with publishing services, book cover design, and editing. All of these are done ineptly, with dismal quality and inflated prices — and that's before the arm-twisting and bogus charges begin.

The addresses listed on the sites are mail drops, leased spaces, or are completely fake. (The company is believed to operate out of Ukraine, although that has not been confirmed.) Each “company” lists a different address, usually a real address, but one which they have never occupied. When asked for a physical address or an in-person meeting, the support agent has been instructed to tell customers that it's an “online, digital business, but you can meet with your team after you sign up” (i.e., pay them). Needless to say, that in-person meeting never happens.

The businesses are unregistered, and it's virtually impossible to find a real person associated with the company.

How can you avoid being scammed?

This is a convincing illusion, and effective, as the hundreds of complaints against this network of deception shows. Consumer watchdogs can't keep up with the ever-changing identities. The Better Business Bureau — which is barely competent on its best day — has given OctaLogo an “F” rating while handing out their paid “A+ accreditation” to several of OctaLogo's disposable facades.

OctaLogo continues to refine their deception. They are no longer reusing names and accounts for fake reviews, another practice that helps hide their tracks. More recent domain registrations now hide the registrant's identity, making it more difficult to connect a new front with the trail of wreckage con artists invariably leave behind them.

With a legitimate-looking website and endorsements, and the unwitting assistance of the Better Business Bureau, these operations can be hard for consumers to detect. Nonetheless, you can reduce your chances of being victimized by following a few simple guidelines.

As I've mentioned in other articles, positive reviews are of limited use, as they can be cherry-picked, incentivized, coerced, or simply fabricated, as in the case of OctaLogo. Instead, let the quantity and severity of the negative reviews steer you away from the worst offenders. If a company has huge numbers of negative reviews, it doesn't matter how many positive reviews they have — there's something wrong there. Listen to those warnings.

2. Look for businesses that are part of the community.

Fraudulent companies tend to operate alone, as they try to avoid scrutiny. Look for companies that have memberships in trusted professional organizations (such as ALLi's partner membership), and verify the authenticity of that membership on the trade group's site. However, as we mentioned earlier, Better Business Bureau “accreditation” is not a meaningful sign of trust.

3. Leverage the collective knowledge of the community.

Ask around. Do the authors in your circles have firsthand (or even secondhand) experience with it? Has the company been vetted by a trusted industry watchdog such as Writer Beware or David Gaughran? Has it been reviewed at length by well-known people in your industry? Someone may already have done the hard work for you. Just be sure that they can be trusted!

Anyone can claim to occupy an address, and few people verify the truth of those claims. Verify the service provider's address on a map, and use Google StreetView to see if it matches their claims. If the company claims to be the best of their industry with offices worldwide, their headquarters is not likely to be a mobile home in Arkansas. Don't drop your guard because you see a shiny glass building, either; most large office buildings are home to post office box rentals or leased office space which anyone can rent (or claim to rent). Look for signage which proves their residency. Search for internet listings that corroborate their information. Seek independent confirmation from trusted sources.

(Note: Many excellent businesses operate out of their homes. The goal here is not to avoid home businesses, but rather, to make sure the company is representing itself honestly and accurately.)

Sometimes, we fall victim to fraud despite taking every precaution. Don't be embarrassed by this. File complaints with law enforcement agencies, and leave reviews detailing your experience. The people behind you will be grateful for the warning.

#IndieAuthors are being targeted by a large and experienced network of scammers. Be on guard! — @johndopp Click To Tweet