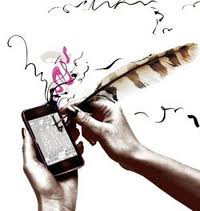 Cellphone novel, anyone? One of the new literary forms ripe for self-publishers

One of the least discussed benefits of ebooks and digital publishing is how they are giving rise to interesting new literary forms.

Self-publishers, being more nimble and less constrained than trade-contracted authors, are finding fruitful niches and changing what it means to write and read a “book”.

The greatest difference between an ebook and a pbook is that the latter is shaped by the demands of the book trade. This is why the vast majority of titles falling in around 100,000 words in length.  Ebooks allow stories to be exactly as long as they want to be.

If early indications are anything to go by, most of them want to be between 10,000 and 35,000 words long.  This has the makings of a whole new genre in both fiction (something between a short story and a novella) and nonfiction (between a magazine article and a book).

Many of the people getting involved in publishing such short form work have a background in magazines rather than books. John Tayman and Mark Bryant, of Outside magazine, created Byliner.com on the back of Amazon’s Kindle Singles.

“It started with our own passion for long-form journalism, for great storytelling,” says Bryant, “and feeling that there was less opportunity to do that at magazines.”

“An excellent introduction to the breadth of self-publishing authors can be found in ezines and websites that collate short works,” says ALLi's Literary Community Builder, Dan Holloway. “As well as htmlgiant and 3:am, there are the likes of Metazen, Housefire and the very best of the author platform sites Fictionaut, each featuring hundreds of authors creating experimental and often incredibly beautiful work.”

In a recent article for The Guardian, Don't Look for eLiterature in Novels, Dan describes how a great deal of literature emerging from the new technology is not in traditional forms.  How, indeed, many of the new forms disrupt or play with the shape of the old and are shaped by what he calls the “tangential mind” facilitated by the internet.

“Encapsulating the… capturing of and commentary on the tangential mind, is James Ganas's stunning ebook James Ganas Was My Best Friend and I'm Sorry He Died So Young of Cancer,” says Holloway. “[This work was] pieced together from the fabricated flotsam of a semi-fictitious virtual life, such as this exquisite status:

People will remember me more for my online presence
Than how i interacted with them in real life
I frequently share pictures and like status updates
In this way i give back to the community
And forge unbreakable bonds.”

Such alt lit is only one emerging change in what and how we read. New technologies are giving rise to many new literary forms: books as apps, serialised stories, the cell-phone novels so popular in Japan, multimedia books; books as online courses and many more.

What do you think of the development? Have you written in any new or unusual forms? Tell us about it in the comments below.