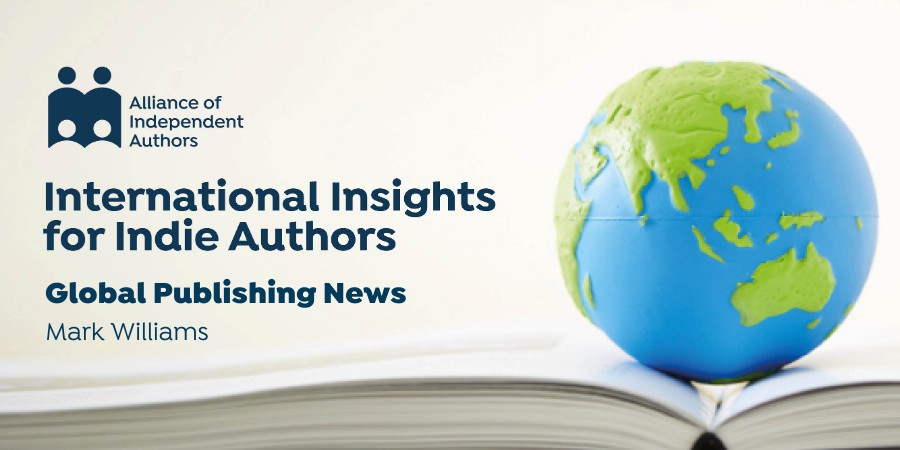 For this week’s edition of the Alliance of Independent Authors International Insights hosted by Mark Williams of The New Publishing Standard, we’re discussing the latest in global publishing news.

There’s never a dull moment on the global publishing scene, and internationalist indies need to keep abreast of development to stay ahead of the game. Today’s news is tomorrow’s opportunity. The 39th Sharjah International Book Fair has just completed an 11-day run in the United Arab Emirates, and was the first major in-person book fair since the global lockdown began in March.

The UAE? Possibly not on most of our prospective book market lists, and understandably so. After all, we all know Arabs don’t read, and anyway the UAE is a small country of fewer than 10 million people. Not much bigger than New York City. Or Sweden. And whoever heard of Sharjah anyway?

In fact, Sharjah was recently World Book Capital, and the Sharjah International Book Fair this year fielded over 1,000 publishers from 73 countries, and attracted a crowd of 382,000 – on par with the best turnout that the Frankfurt Book Fair can pull in. And on top of that it pulled in another 65,000 virtual visitors for its digital events.

That’s close to 450,000 visitors in all, and while it was considered a big success in the circumstances — strict Covid-19 controls meant fewer than usual visitors were allowed in – it was but a shadow of the “normal” Sharjah event. Last year the Sharjah International Book Fair pulled in an in-person crowd of 2.5 million, and 2 million is about average.

Arabs don’t read? Some of the biggest book fairs in the world are in the Arab markets. The UAE is the base for Storytel Arabia, just one of many audiobook services there. Google Play Books is there too. Sadly despite there being an Amazon UAE, there is no UAE Kindle store. But, small compensation as it is, we can sell Arabic-language ebooks on Amazon where there are Kindle stores, and also on Kobo.

If you ever get the chance to visit Sharjah, be prepared to be surprised. Sharjah is home to the world’s first Publishing City and books are revered like you wouldn’t believe. Sharjah is also the home of the IPA Vice President Bodour Al Qasimi, and of a publishing legend — literally — like you won’t hear anywhere else in the world. An Arab prince is bequeathed a golden dagger — a priceless family heirloom to be handed down from generation to generation. And at twelve years old the boy mortgages the golden dagger to buy books. That boy, now a grown man, is better known as His Highness Sheikh Dr. Sultan Bin Muhammad Al Qasimi, the current ruler of the emirate of Sharjah. And you won’t find a more generous and energetic proponent of books and publishing anywhere.

I mentioned Sweden above. There’s another publishing legend in the making there as Sweden reaches the tipping point where digital books, and especially audiobooks, are on the brink of outselling print.

By some counts that’s already happening, with digital now 60% of the market, but the Christmas trading period could help pull back print’s slide, if Covid-19 restrictions allow. But just this month Storytel CEO Jonas Tellander announced he expected audiobooks alone to be more than 50% of the Swedish book market by the end of this year.

Storytel just launched in Belgium (its 21st market) and is set to launch in Thailand any day now. It has launches in Indonesia and Israel lined up for early 2021, and 16 more markets to come by 2023.

Nextory meanwhile, is set to launch in the Netherlands in December, and there will be more launches soon, as Nextory has just banked a $20 million investment for global expansion, having picked up $6 million earlier this year.

In the UK too, audiobooks and ebooks have been soaring. In fact the UK digital books market is expected to hit an all time high this year. And for the record, no, audiobooks are not outselling ebooks. By Nielsen’s own figures ebook sales in the UK are roughly double audiobook sales, and that’s just mainstream numbers. The real numbers for ebooks, when we factor in APub, small press and indie sales not recorded by Nielsen, will be much higher. So much for screen fatigue.

Meanwhile, in the USA the world’s largest trade publisher, PRH, finally launched its Spanish-language arm in the USA. Penguin Random House Español will focus on PRH titles aimed at Spanish-speakers in the USA, a market not to be sneezed at. The USA is the second-largest Spanish-speaking market in the world, after Mexico. And yes, that does mean the USA has more Spanish-speakers than Spain. Some 20 million more. In fact, the USA’s 60 million Spanish-speakers make it a potential market larger than Italy and not far short of France or the UK.

But let’s leave the USA now and head for SE Asia, where Big Bad Wolf, which you may remember sells English-language books by the million (literally) to eager booklovers in countries where usually English is not the first language, has set up its next online sale in Indonesia. Set for December 1-7 the sale will be run on the SE Asia e-commerce site Tokopedia.

This comes soon after the huge success of the Big Bad Wolf online sales in Malaysia, which attracted over 1.5 million buyers in its first run and then extended that run with a partnership with the SE Asia e-commerce site Shopee.

The absence of any mention of Amazon being of course because Amazon is not accessible in SE Asia, although an Amazon Indonesia launch is being prepared. But don’t expect a Kindle Indonesia store to accompany it. We literally this week marked the sixth anniversary since the Kindle Netherlands store launched in 2014. There have been no new Kindle stores since, despite new Amazon launches in Singapore, Turkey, Saudi Arabia, the UAE and Sweden.

Fair to say that wishful thinking about further Kindle stores can now be classed as a triumph of hope over experience, and this should be all the more reason to keep watching the international markets for new opportunities.

A good place to look for future opportunities is the UK trade journal The Bookseller’s Futurebook event, which this year is online (and happening as this post is written).

Jonas Tellander, the CEO of Storytel as mentioned above, has good advice for publishers:

And that’s as important to us indies as to mainstream publishers. For a closer look at the streaming model and what it means for indies, see this ALLi International insights post. And for my analysis of the Tellander remarks, see here.

Harking back to the ALLi post, just a reminder of the main point in that article: that we should not judge subscription on our Kindle Unlimited (KU) experience, good or bad. When we choose to opt into KU we have no choice but to opt out of all other platforms, whether à la carte retail, subscription, library or other. With Amazon, KU subscription means exclusivity. Take it or leave it.

But we can stay just in Amazon’s retail sphere and participate in as many the subscription services (and retail and library and…) as we can muster the energy for, opening up a whole new vista of subscription options, including Storytel, Bookbeat, Nextory, Bookmate, Findaway, 24Symbols, Skoobe, Scribd, Ubook and too many more to mention.

So much more happening around the world, but no more space to explore, so I’ll wind up this post, as I nearly always do, by saying: