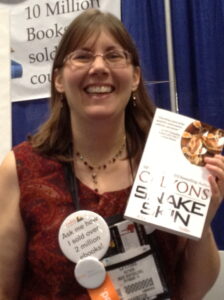 Mad old Manhattan. It’s good to be back, walking small between its skyscrapers; stepping aside to let a scurrying New Yorker pass; enjoying — for the few days I’ll be here — the thrusting push of this place that prides itself on working and shopping and driving and drinking and playing (but mostly working) loud and hard.

You might think BookExpo America, America’s biggest trade fair for books and one of the reasons I’m here, might provide an asylum, in the old sense of the word as sanctuary, from the craziness. That publishing is a business whose chief raison d’etre is to nurture the bond between writer and reader, the miracles that happen when one human imagination sits in quiet communication with another.

This, after all, is what draws so many clever people who could make a lot more money on Wall St or Madison Ave, to take jobs in what was once known as the “gentleman’s profession”.

Alas that profession, whose task is always to balance books with business, the creative with the commercial, has largely lost itself in the latter. And is now paying a price as creativity surges, as it always does, when commerce loses the run of itself.

What’s wonderful about books, what makes them different from selling baked beans, is that creative spirit. It won’t be kept down and often flourishes in niche corners and curious ways. Which, of course, is where we, dear indie authors, come in.

Book Bloggers
Though we haven’t quite come in as far as BEA is concerned, not just yet. The show is largely ignoring self-publishing, beyond complaining about the large numbers of bad books it produces, and wishing it would just go away.

Book bloggers and non-celebrity authors have been relegated to two events on the fringes of the fest: a book bloggers’ conference on Wed, the day before the action got going, and UPublishU tomorrow, the day after the serious stuff winds up, when the public are also “let in” to the fair.

Both these events cost extra to attend and, if the bloggers’ conference which I attended on Wednesday is anything to go by, those put up on stage to talk about the newest wing of publishing don’t quite get it.

BEA seems to view book bloggers as only one breed, those who review books. A highly valuable species for writers and readers but the book blogosphere encompasses so much more than that. None of the most interesting and dynamic book bloggers on the web were anywhere to be seen (you know the ones who actually — ahem — write books and have used their blogs to carve out their writing niche.). No Bob Mayer, Barry Eisler, Hugh Howey, David Gaughran, CJ Lyons, Joel Friedlander, Joanna Penn or anyone of their ilk was put upon the stage on Wednesday.

Neither did we get any of those who have built blog followings by commenting astutely on the wider book scene and its implications for us all, no Jane Friedman or Futurebook to name just two. Instead we got a number of trade publishing people speaking from their perspective. Useful, if sometimes inaccurate from a self-publishing perspective but, more worryingly, completely omitting that half of the story.

The audience of book bloggers was thus denied the fascinating insights and ideas about the wider industry afforded by those who are riding the wave of change, and not just staying afloat but surfing it into unimagined success.

Bestselling Indies.
But all is not lost. Yesterday, Thursday, saw the dawn of  Booth 966, where indie’s very own Big Six have come together to show their wares and demonstrate what can be done. Bella Andre, Stephanie Bond, Tina Folsom, Barbara Freethy, Hugh Howey, and CJ Lyons joined forces to splash out on some costly BEA rspace.

Wearing badges that proclaimed “Ask Me How I Sold 1 million books” or “… 2m books” or, in Barbara’s case, “… 3m books”, at 1pm yesterday they signed copies for fans and took questions on self-publishing and indie authorship. It was CJ, a woman who is rarely short of a good idea who came up with the plan and she is thrilled with the response it is getting from readers and fans, if disappointed by the silence of the trade press like Publishers' Weekly on the initiative.

The global-conference-trotting Porter Anderson, who always has his finger on the pulse, was on hand however and we had one of our friendly spats as we watched the action unfold. Porter, who writes not one but two excellent industry analysis blogs, is one who is concerned about self-publishing flooding the market with “amateur” work. I on the other hand delighted to see these six very different writers come together, not so much to promote their own books — though that too of course — but also to say “look at us, we are here, ask us how we did it…”

All six of these mega-selling authors write in different genres, take different approaches, found success in different ways, have different readerships, hold to different ideas and have varying plans for their future. They are united by one attribute, they understand the radical transformative potential of self-publishing

When the people at the booth next to them failed to show and the authors moved into that space, it seemed like a fine metaphor for the brave new publishing world that isn’t the future any more but here, now. It won’t be too long, I predict, before the indies take over a goodly part of the asylum.