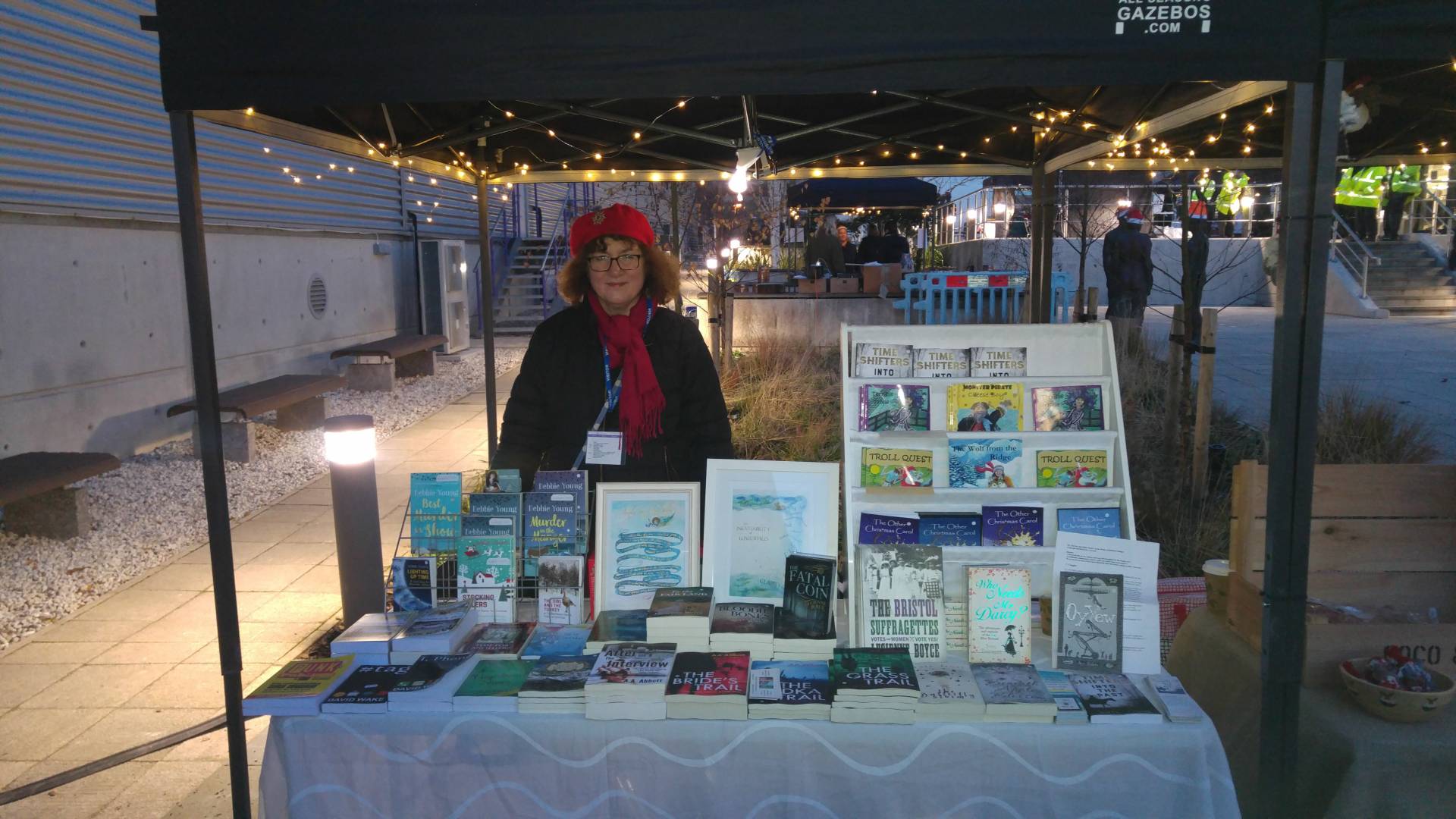 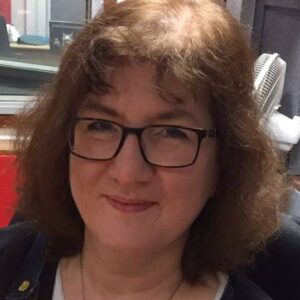 As I wrote back in December when I launched this new series of posts about collaboration, working together with supportive kindred spirits will help keep you motivated and on track to achieve your 2018 author-publisher goals. I'm kicking off the series with a case study of a project that I was involved in myself last month. After that, it's over to you…

Although the event I'm about to describe had a Christmas theme, the lessons learned from this exercise are relevant all year round.

The opportunity to arose from something completely unrelated to indie authors: a major local employer, Dyson, which has around 3,000 staff at its Malmesbury, UK headquarters, stages an annual Christmas Market for its employees. The event takes place on its high-security premises, during the normal working day. Although I live only a short drive from Malmesbury, I only found out about the event via a fellow ALLi author who lives twenty miles away in Bristol.

From Thriller Writer A A Abbott:

“As Helen Blenkinsop, I work as an accountant for half the year. I then write full-time, as AA Abbott, for six months. That was how, having published crime thriller The Grass Trail in July, I ended up working at Dyson over the winter. Dyson loves to support the local community, and was delighted to host an indie authors' bookstall at its Christmas Market. I had the best of the day, spending most of it working a warm office while fellow ALLi members Debbie Young and Ana Salote set up and manned the stall.

“At lunchtime, with the winter sun at its highest, I joined them for a couple of hours. Many of my colleagues headed over to browse and chat – I'd previously sent an email round reminding them that books were great Christmas presents. The fact that all the books were signed by the authors was a great USP, and converted several browsers into buyers.” 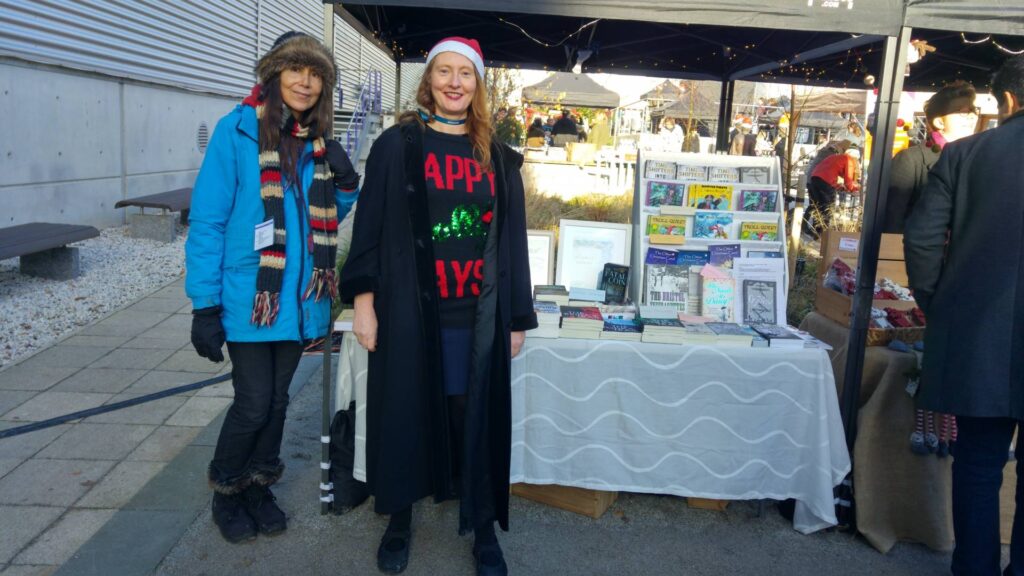 From YA Author Ana Salote:

“Our book stall at The Dyson Christmas market was a great example of authors collaborating to sell their books. The event itself was extremely well organised and the workforce were from a book-buying demographic. Helen had selected authors for the quality of the writing and to represent a range of genres – sci-fi and steampunk author David Wake, children's writer Suzanna Stanbury, contemporary novelist Kate Frost, historian and historical novelist Lucienne Boyce, and historical novelist Jean Burnett, as well as the three of us in attendance on the day. It meant that we had confidence in the product and could provide something to suit most tastes. Helen provided a spreadsheet of book details to help us direct customers, and Debbie had in-depth knowledge of many of the books through her generous support of ALLi authors.

It’s always easier to tip a browser into buying when the author is present.

“Helen was a co-worker at Dyson, and Debbie’s books were set locally, which made for an extra sales push. The importance of covers was also notable. The men in particular were drawn to the black techy covers.

“As always, author events provide networking and social media opportunities which go beyond the event itself. You never know who you might meet or what you might learn.

A catering staff member turned out to be an editor and proofreader. The uncle of the veg box seller runs a large literary festival, and I got some direct inspiration for my WIP.

More Than the Sum of the Parts…

Between us we sold quite a few books, though we couldn't compete with the queue for the upmarket donut stall! We even managed to cater for people who waved our paperbacks away, saying they prefer ebooks – we proffered bookmarks and postcards with URLS for them to look up on their ereaders at their convenience!

Even in this busy (and chilly) period in the run-up to Christmas, we all agreed it was time well spent, and that it was stimulating to get out of our comfort zone and visit an environment we'd never usually see, meeting people beyond our normal social circle. I particularly enjoyed meeting a young hippie who handmakes wooden-wicked candles on a barge in winter, while in summer selling food to festival-goers at Glastonbury – I'm longing to write him into a story! I also enjoyed working alongside Ana and Helen, and getting to know them better – and to observing and learning from their sales techniques. Both are smart, persuasive operators, in very different ways.

… And More Than a One-Day Bookstall

But the day wasn't just about selling books – nor even about the fun of peeking behind the scenes in a prestigious, world-class technology company  It also helped us make connections which we hope to build on in future, even after Helen has finished her contract there. We were all impressed by Dyson's kindness and courtesy. Not only did they not charge us for the stalls, but they provided each stallholder with an immaculate fairy-lit marquee and table, cafeteria vouchers, and porters to help us unload our cars. This made us feel greatly valued and respected – always good for an author's ego! – which in turn helped us keep smiling, even when our fingers and toes were freezing!

Although I had known and respected the Dyson operation for a long time, and I'd even met the founder, James Dyson, years ago, when I recruited him as guest speaker for an event at my then employer, but it had never occurred to me that there might be opportunities to promote my books there.

I've since been told by friends who work for similar large organisations that it's common for them to hold such events, and not only at Christmas. So if you have a big corporation near you, it may be worth enquiring about what openings there are for you and your author network to collaborate.

OVER TO YOU Which neighbourhood organisations have helped your author career? We'd love to hear about any similar experiences. Thanks also to other ALLis who have already submitted case studies of effective collaborations – please keep them coming!

#Authors - ever collaborated with local employers to sell your books? Read this case study for ideas Click To Tweet