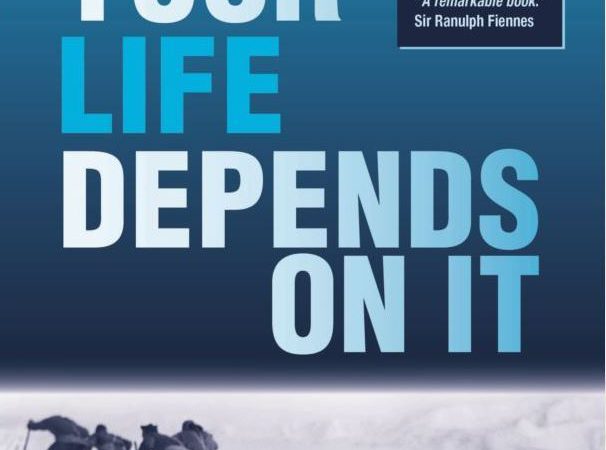 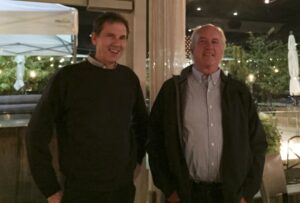 Brad Borkan and David Hirzel at their one and only meeting in real life!

Interested in co-authorship to boost your productivity as an indie author and expand your back-catalogue of self-published books?  Then read ALLi author member Brad Borkan‘s five suggestions learned from his experience co-writing a book across two continents and eight time zones.

Why We Co-Wrote a Book

Although in the past books have rarely been books co-written, more and more indie authors are looking to collaborate, and some of my favorites—Is Paris Burning?, O Jerusalem, and Freedom at Midnight— were co-authored by Larry Collins & Dominique Lapierre.

These books were my inspiration to find a co-author for my book about the life-and-death decisions made by the early Antarctic explorers.  Here are five suggestions that might help others with an interest in co-authorship. 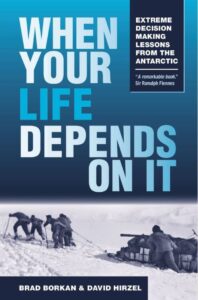 I knew my book would only come to life if I could find a co-author with complementary skills. I met David Hirzel for the first and only time at an Antarctic conference in 2015.

I never heard of him before; nor had read his books. Some things however were meant to be. We had complementary skills and knowledge.

Rather than starting our partnership hiring lawyers and arguing over potentially divisive contractual issues, we started by focusing on what we were going to achieve:

Although we barely knew each other and lived on different continents eight time zones apart, we found we were in complete agreement on these 4T’s. Discussing the 4T’s was infinitely more fun than talking about the T&C (terms & conditions) of a contract.

So, focusing on your goal helps to get the partnership on the right track. For us, being in agreement on the basics gave us tremendous energy and momentum.

We spent three months debating our table of contents and writing a summary of each chapter in one or two paragraphs. During this process, we purposely agreed a low-tech approach – using Word and Excel, and communicating via Skype and email. Excel proved valuable for defining each chapter – its title, theme, key Antarctic life-and-death story, and ultimately which of us “owned” the chapter. Later that same spreadsheet became valuable for keeping track of chapter edit versions.

In the early stages, we each wrote test chapters and realized how different our writing styles were. This could have been a show-stopper.  However, with our initial agreement on the 4T’s and having invested three months into our table of contents, we were easily able to spin our different writing styles as a positive for the partnership. We would extensively edit each other’s chapters.

To both of us, ego was secondary to achieving our goal.

Early in the writing process, we hired two excellent editors (structural and copy).  Both were scathing in their criticism. We learned a lot in the process. The prologue for our book – about a heart-wrenching decision facing three men on the ice, one of whom is dying of scurvy – took more than twenty rewrites.  Later in the writing process, our styles merged and there were (thankfully) fewer re-writes.

Thanks to a focus on the end result, as well as keeping a sense of humor throughout the two years that we worked on the book, we had only one disagreement, and that was relatively minor. It had to do with a letter that Amundsen left at the South Pole in 1911 addressed to the King of Norway, with the intention that it be delivered by his rival, Robert Scott. (You’ll have to read the book to find out happened to the letter. Hint: it is visible today at the National Library of Norway, and it resulted in a marriage for the person who delivered it.)

For us, co-writing our book has been a fulfilling process, resulting in a multi-national life-long friendship with talk already of another book.

BTW, to this day, we don’t have a signed contract between us.

OVER TO YOU Have you tried co-writing a book? If not, are you tempted, and why? If you have, feel free to add further tips to Brad’s exellent list.

Collaboration Case Study: How to Use Skype to Work Together Across Continents

Brad Borkan is the co-author of “When Your Life Depends on It”, which focuses on the real life-and-death decisions made by the early Antarctic explorers. His book has been endorsed by Sir Ranulph Fiennes, the world’s greatest living Polar explorer.

Brad’s interest in polar history started when he picked up an Antarctic book at the age of 8, at the local public library. His life-long fascination with how people and businesses can make better decisions led to a graduate degree in Decision Sciences from the University of Pennsylvania.

He has presented at Antarctic conferences in Norway, Ireland and the UK, and appeared on cable TV in the US, and on Internet talk radio programs. He also speaks at corporate events and business conferences – most recently to 370 people at Credit Suisse Investment Bank – on the themes of leadership, team work, and winning against the odds, all set in the exciting context of Polar exploration.

Earlier this year Brad was named as a Fellow of the Royal Geographic Society.

Find out more about his book at www.extreme-decisions.com.