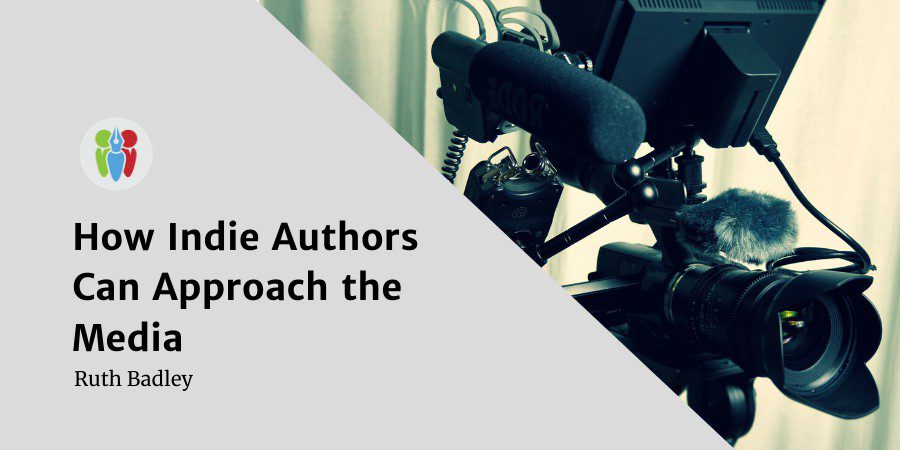 You don’t have to be a celebrity author to get newspapers and magazines to pay attention to your book. ALLi author member and freelance journalist, Ruth Badley, explains how indie authors can approach the media with a focused strategy and secure media coverage and other promotional opportunities. 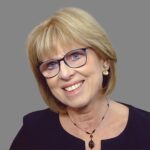 As an unknown, first-time author I was realistic. I knew I had no chance of interesting the national print or broadcast media in my book, a multi-generational memoir, titled, Where are the grown-ups?  How could I compete with the big publishing houses who regularly push their authors in the glossy magazines and arts supplements?  Having been a journalist myself, I knew, with a bit of research and some creative thinking, certain media outlets were well within my reach.

Whilst planning my book launch event in East London I identified the main local paper, community radio station and independent magazine and looked online at the kinds of articles they published about arts events. It is worth being forensic about this research to fully understand house styles, who the writers and broadcasters are, and what might work for their audiences

As a general rule local newspapers are concerned with ‘news.’ Magazines have a longer lead-in time so their features are less time-critical.

I created a simple media table in Word with three columns where I could log the name of each outlet and contact details. Later I added the date I approached them and notes on the actions that followed.  I kept adding to and updating this table as I went along. If you’re in touch with several media outlets it’s easy to lose track of events and miss an opportunity because you didn’t make a note of the journalist’s deadline.

Before contacting the press, I prepared a basic press release for my book that answered the who, what, why and where questions, to make the story attractive to journalists. Later I adapted this press release and used it for different media.

I had a high resolution headshot of myself and the book cover on file, ready to accompany the words.

I would advise speaking to a journalist on the phone first, to sound them out on their interest, rather than emailing your press release, unannounced, hoping they notice it. Nine times out of ten they won’t. If they’ve already had a conversation about it, they might. It will probably need another follow up by phone and an email re-send for a positive result, but by that time you’ve started to build a useful relationship.

Communicating succinctly what a book is about to journalists, on the phone and in a press release is a valuable exercise. The more you do it, the easier and slicker it becomes.  The East London Advertiser used my press release in full. It started like this:

The death of a Stepney Green woman following childbirth in 1930 is the premise for a new book, penned by her granddaughter.

Where are the grown-ups? by Ruth Badley explores the impact of this tragedy on three generations of her family.  A presentation and reading by the author takes place at the Half Moon Theatre, Limehouse on 17 July 2019. 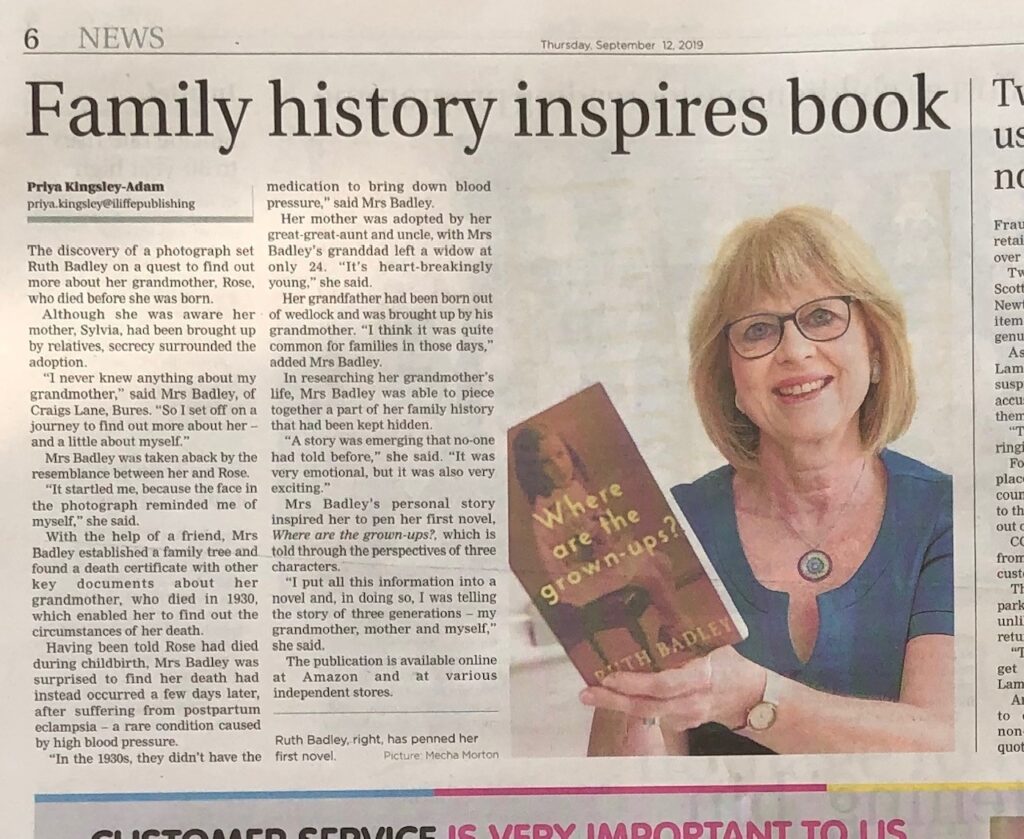 The launch event, was of limited interest to the media outside the immediate location, so for other publications I used a different angle. Another version was prepared for a Jewish weekly, to publicise two speaking events I am involved in for that community.

The impact of a hidden family tragedy ripples across three generations in Where are the Grown Ups? the new narrative memoir by Ruth Badley.

Rose Dehaan, 25, a Jewish cigarette maker from London’s East End only had time to name her baby Sylvia before post-partum eclampsia claimed her life.

Whilst expectations need to be managed, it is well worth being ambitious. Aspects of my storyline are the stuff of BBC Radio 4 programmes, like Woman’s Hour and Saturday Live. I’ve made contact with the producers and presenters of both to make sure I’m on their radar, should a future opportunity arise.

Whatever your genre, the vast array of magazines dedicated to specialist interests may offer another opportunity. With ancestry and genealogy a popular topic and my story steeped in my own family history, I thought it would be worth approaching the associated magazines with a ‘reader story.’

Family Tree magazine was exceptionally helpful, inviting me to write a guest blog for their online site, and reviewing my book in print. 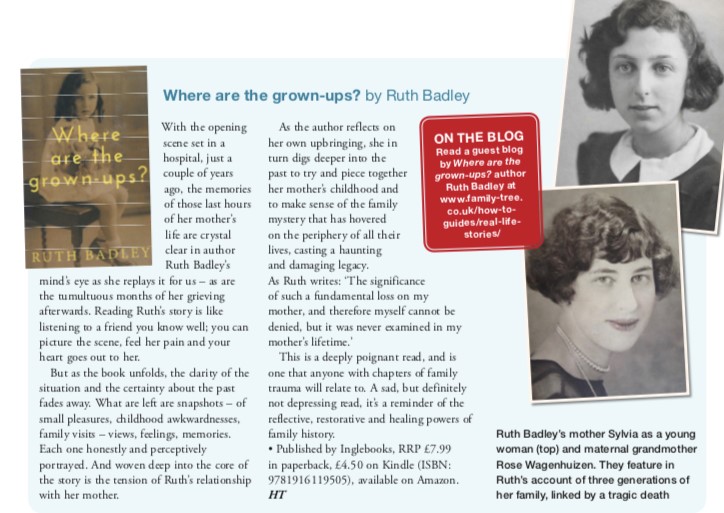 Think of Yourself as a Local Author

The ‘local author’ angle is another that worked for me as it will for others. I live on the border of two counties. Newspapers in both Suffolk and Essex approached me for an interview following receipt of suitably tailored versions of my press release.

I could exploit a dramatic personal storyline but local papers give space to authors for many reasons. There might be synergy with an interest group or event in your locality that will make your involvement newsworthy.  Giving a free talk to a community group or organising a book signing event with a donation to charity is the bread and butter of local papers. If there is a particularly visual element to your story you might just get a regional television slot on a slow news day.

Promoting your own book to the media is time-consuming.  Journalists are not always at their desks or in a position to take your call. Find out when they go to press and avoid ringing them the day before as they will be working on the front page and will not be receptive.  Be patient, polite and persistent. A presenter on BBC Radio Suffolk has urged me to keep reminding her about an interview slot!

Ruth’s book, Where are the grown-ups?

Column inches have had a significant impact on my sales and led to speaking opportunities at a London book festival and for a specialist podcast in America.  Sharing positive press coverage on social media gives valuable third party credibility. The warm glow that comes with a seeing an article on your work in a newspaper or magazine is not to be underestimated either, though rarely admitted!

One final piece of advice. Thank the journalist afterwards. It is always appreciated and remembered. Further down the writing road, you just might need to contact them again.

How do you approach the media? Have you had success with local media? If so, what tips and tricks can you share?

How to DIY PR for Indie Authors

Ruth Badley is a freelance writer and PR consultant.

She graduated from the Central School of Speech and Drama in 1978 and taught in secondary schools in London before moving to South Australia, where she worked in adult migrant education, specifically with Vietnamese and Cambodian refugees.

Later she pursued a successful second career as a journalist and was the arts and food writer for a regional newspaper group in North Yorkshire.

Where Are The Grown-Ups? is her first full length work.