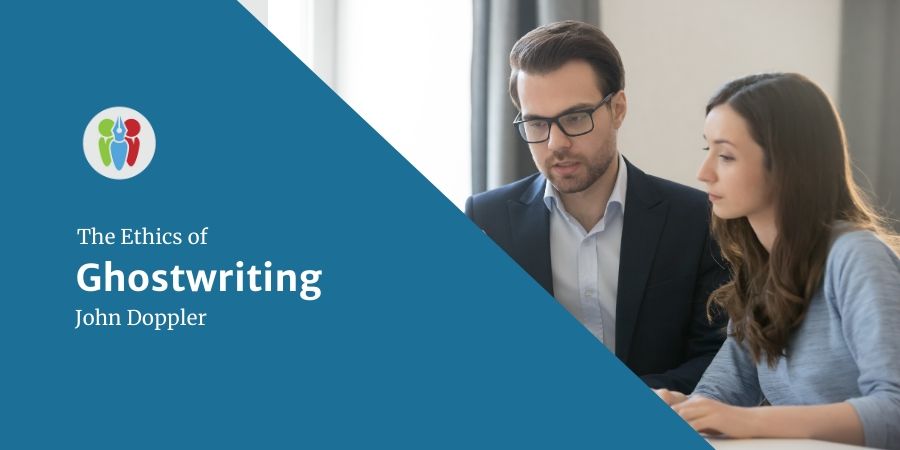 The topic of ghostwriting elicits strong negative reactions in some people. There may be an air of contempt or distaste associated with it: “He doesn't even write his own books, he pays someone to do it for him.”

Others feel that ghostwriting is a collaborative process no different than hiring a developmental editor or writing coach to help shape the final work.

Admittedly, when I first approached this subject seven years ago, my feelings on ghostwriting were negative. But when it came time to evaluate professional ghostwriting services for ALLi's Watchdog Desk, I had to step outside that bubble to consider the practice objectively. Is the practice unethical? Was my distate warranted?

After quite a bit of researching and soul-searching, I arrived at an answer. And that answer is… it's complicated.

Before we delve into the ethicality of it, let's take a quick look at common objections to and defenses of ghostwriting.

The nature of the ghostwriting relationship

The reality is that any of these views can be true, depending on the context. Ghostwriting at its best is empowering and collaborative, and at its worst it can be lazy and deceptive. Ghostwriting encompasses a spectrum of transactions, and the form it takes — as well as the intent behind it — will change that equation significantly.

In Scenario A, the CEO of a company wants to publish a book to boost their public profile and establish authority in the industry. They provide a ghostwriter with a half page of notes and quotes, instruct them to “write me a book about leadership,” and pay the ghostwriter handsomely. The book is published under the CEO's name alone and receives critical acclaim.

In Scenario B, an established author has several ideas for books, but insufficient time to write them all. They hire a ghostwriter to take on some of these projects, provide a detailed outline of the plot and characters, supervise each project, and rewrite it to ensure that the voice matches their own. The book is published as a collaboration of “Rich Author and C. O. Writer”, and the ghostwriter is paid a percentage of the sales revenue.

In Scenario C, a celebrity hires a ghostwriter to pen their memoir. They work closely with the ghostwriter, who interviews them about their experiences and helps to structure the book. The memoir is published as “Faye Mousguy, with I. M. Scribe”. The ghostwriter is paid a flat fee.

Each of these are formal ghostwriting arrangements, but the ethical ramifications differ greatly.

In Scenario A, the CEO takes full credit for the book, and the ghostwriter is amply compensated for the use of their words. Value is given and taken. But what about the implied contract with the reader? The reader is being told that these are the words and wisdom of the CEO. The CEO is profiting from that deception, and is using it to inflate their standing in the community. To me, this is clearly an unethical arrangement. These are not the CEO's words, or even their thoughts; their contribution to the book was minimal. The reader is being sold a lie, one that both the ghostwriter and the client are complicit in. Transparency is the foundation of ethical behavior, and the deception inherent in this arrangment violates that.

In Scenario B and C, the client has hired the ghostwriter for different reasons. The famous author wishes to save time and accelerate the writing process, and the celebrity wishes to leverage the ghostwriter's talent and skill to help tell their story. One can argue that the CEO is doing this as well, but the difference lies in the degree of collaboration and the credit. In both B and C, the client was not only intimately involved in the creation of the book, but has given proper credit to the ghostwriter. The ghostwriter receives appropriate compensation for their work, and the reader is not deceived about the roles of the contributors. In both B and C, the hierarchy between the ghostwriter and the client is made clear by the use of “and” (co-equal credit) or “with” (which implies a lesser contribution). I see no ethical conflict here.

In each of these scenarios, compensation does not factor into the ethics. As long as the ghostwriter is being appropriately rewarded for their work, the details of the arrangement are up to the client and the ghostwriter. This may also mean negotiating a larger payment for nondisclosure or a smaller payment for the privilege of piggybacking on a bestselling author's reputation. Keep in mind that exposure is never a substitute for legal tender.

So what ethical guidelines can we distill from these examples?

1. The ghostwriter may tell the story, but the essence of that story must be the client's experience.

Capturing the essence of someone's thoughts and voice is not a simple process. It takes many hours of personal interaction. A ghostwriting arrangement should involve the client to a degree where the story is authentically theirs, and that requires substantial input from the client. The client cannot ethically say, “write me a book about x that's y pages long”, hand over a fistful of cash, and then present that work-for-hire as their own genius. A work manufactured almost entirely by the ghostwriter, which imparts wit and insight that doesn't belong to the client, is a fraud committed against the reader.

2. The reader should not be deceived about whose work they're reading.

This corollary to the first point is likely to meet with resistance. Ghostwriters and their clients often maintain secrecy about the arrangement, partially due to the stigma surrounding the practice. Many ghostwriters will forgo a credit on the book in exchange for compensation, which becomes problematic when the client is looking for someone to write a book for them rather than with them.

The larger context surrounding the work is also a factor in how much transparency is required. Journalism requires rigorous transparency about who is relating the story, which is why many newspapers and publications explicitly forbid ghostwriting. Speechwriting does not; it is common knowledge that many orators from presidents and prime ministers employ professional speechwriters. Academic and scholarly works should without fail be attributed to the person who did the work. (Most of us were taught in elementary school that it's wrong to hand in someone else's homework with your name on it, and that's just as applicable in the larger world of academia.)

3. Using a ghostwriter should not be shameful.

In public scandals involving ghostwriters, the backlash isn't over the use of a ghostwriter. It's about the readers and fans feeling deceived.

Consider the outcry over the debut romance novel from beauty blogger Zoe “Zoella” Sugg. Published by Penguin in 2014, the book raced up the New York Times Bestseller list, selling nearly 80,000 copies in its first week. But when it was revealed that the book had been ghostwritten, the internet outrage machine exploded, lashing out at Sugg, her ghostwriter, and Penguin. Penguin ultimately admitted that Sugg “did not write [the book] on her own,” to further condemnation.

Although Sugg thanked her collaborators by name in the acknowledgements, the nature and scope of their involvement were not disclosed, nor were they officially credited. If Sugg or the publisher had been more transparent, it's likely that the scandal could have been avoided without harming sales in the least.

The problem with secrets is that they don't remain secret. When they do escape, that broken secrecy calls attention to itself, and magnifies the issue tremendously. If the discovery of that secret would make you feel shame, that is a bright red, flashing warning that you shouldn't be doing it.

The Watchdog's perspective, and a personal one

After careful consideration, I've discarded my previous views on ghostwriting. There is nothing inherently unethical or distasteful about the practice when it's transparent and an authentic expression of the client's message.

In reshaping my views for ALLi's Watchdog Desk, my personal attitudes have shifted as well. One of the greatest barriers to my fiction is simply getting words onto the paper. I love my characters. My plots thrill me. I delight in worldbuilding. I excel at wordsmithing. (At least, I feel confident that I do; the Dunning-Kruger effect is always a hazard.) By all rights, I should be blasting my keyboard into plastic shrapnel with the force of the words pouring from my fingertips. Sadly, my keyboard remains intact: bridging the gap between idea and implementation has slowed my writing to a standstill.

Enter ghostwriting. I would not have considered the idea a few years ago. Now, with a fresh perspective, I'm looking at it as a tool to defuse the mental landmines that keep me from completing my fiction projects. I'm partnering with an author whose skills complement mine beautifully. I'm providing her with a meticulous outline, plot, and world bible; she is fleshing that skeleton out into a complete story, which I will then revise and finesse into the work I've envisioned.

It's a dramatic departure from my past workflow, and that fills me with excitement and trepidation in equal measure. I'll report back on the results later this year.

What are your thoughts on ghostwriting? Do you feel betrayed on learning that a book was ghostwritten, or is an enjoyable story all that matters? Let us know your perspectives in the comments below!