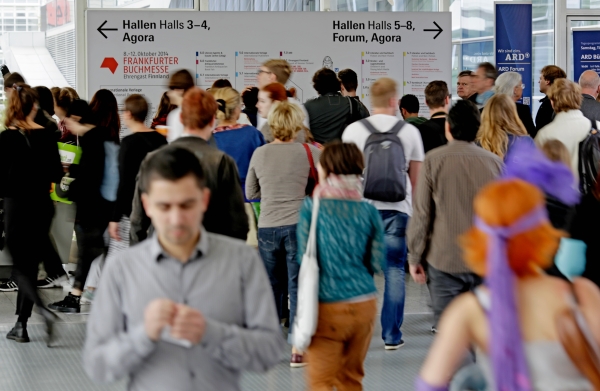 Frankfurt for Indies: An Abundance of Abundance 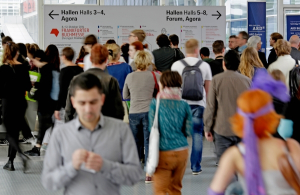 We’re back and pretty much unpacked from Frankfurt, a maze of exhibitors and a haze of publishing professionals and business cards. For the traditional publishing world, the fair is perhaps the most traditional of all. Compared to London and even BEA, Frankfurt is old world publishing: a mecca for big deals and bigger expense accounts. Although publicly accessible at the weekend (and boy did Frankfurt fill up with some cos-playing teenagers on Saturday), there are still strong dividing lines – a sense of “us” and “them”.

Breaking down those walls was the expectation at this years Book Fair, with more space for those with an interest in self-publishing. There were two distinct areas – a more coherent mass for the Germans in Hall 3.1, and a slightly fragmented spread in Hall 8.0, the domain of the English-language publishers. In addition, the first international Frankfurt programme dedicated to self-publishing kicked off, behind closed doors on Friday (curated by Authoright) and coming out into the open at the Publishing Perspectives Stage on Saturday.

That self-publishing is finding its feet at Frankfurt is no understatement. In a bid to pack out the programme, some events and seminars felt rushed, and perhaps failed to grasp the most exciting and challenging aspects of being an independent author – that the learning curves are steep and that there isn’t a one-size-fits-all solution.

We met a group of authors who had clubbed together and travelled from various parts of the world – Japan, New Zealand, America – only to realise their expensive stall was definitely located in the wrong area and had spent most of the fair feeling isolated and alone. In these cases, it’s easy to see why indies are not interested in Frankfurt – the enormity of it can often lead to a feeling of some club that is completely the wrong fit for an indie author, whose business is distinctly personal.

But there were plenty of reasons to be hopeful, with many people embracing and addressing some of the key issues for self-publishing. In a cheering town hall discussion on Friday afternoon, the panel – including Joanna Penn, Jonas Lennermo of Publit, Dr Florian Geuppert of Books on Demand and David Taylor of Ingram Content – all emphatically responded to the talk’s title “Are there too many books?” with eloquent variations on the word “No!”.

The panel agreed – authors need to be empowered marketers in these times (as Joanna said, no one is going to love your book more than you), but this is not something that has to be limited to a set publishing path, and it definitely doesn’t mean reducing output.

Elsewhere, Orna led an impassioned discussion with Porter Anderson and Marcello Vena, arguing the creative impulse is as much a guiding force in publishing as sales figures. In a Saturday panel with fellow indies Kit Berry and Dmitry Glukhovsky, she also highlighted one of the most important basics for any new author: define what success means for you. 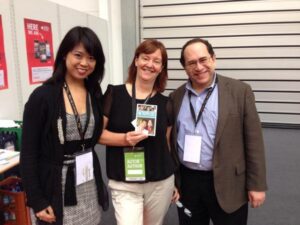 Alongside Kobo, IngramSpark and Nook, we saw start-ups providing fresh ideas for self-publishers, including the book-team marketplace Reedsy, who have just launched this week and Matthias Matting’s fantastic Authorbuddies.com, a place for authors to pair up across the world and offer support and insight to each other.

There were services that we as an organisation are excited to explore and bring to you a little later, once we’ve checked them out: from crowdfunding in multiple languages; literary agents solely focussed on self-publishing rights; to apps and platforms connecting readers and authors in new and exciting ways.

Frankfurt may be at the beginning of accommodating self-publishing into its hallowed halls, but discovering these people was proof enough that it’s most definitely worth the growing pains.

At the end of our stay at the exhibition centre, we wrapped things up by watching Kindle Direct Publishing celebrate 25 of their biggest German authors in the middle of the Exhibition plaza. Outside the confines of the halls, right bang in the middle of the fair, the authors brought their fanbases together, creating a space that felt as inclusive as publishing can ever get. At that point, it became so much clearer.

Yes, Frankfurt is an abundance of abundance. And yes that abundance can be exciting and encompassing and at times, overwhelming and daunting. But that moment made me realise that whilst the choices indies make are inevitably personal, partnerships, mutual support and coming together are the only ways you can truly find a space of your own.

“An abundance of abundance”: @IndieAuthorALLI rounds up #fbm14 for #indieauthors #selfpub – bit.ly/1p8SBJa