In this week's Self-Publishing News, ALLi News Editor Dan Holloway fills us in on the latest with a look at Kobo's 10th birthday and some projects to promote reading.

It's one of those often quoted platitudes that you can do far less than you imagined in a year, and far more than you imagined in 10. The next couple of weeks many of us will be reflecting on the truth or otherwise of that, as a decade draws to a close. In self-publishing terms, we've seen a couple of slow-ish years recently, though the slow rise of audio and AI signal impending seismic shifts. But I don't think anyone can doubt the upheaval of the past 10 years, at the start of which the Kindle was still in its cradle. 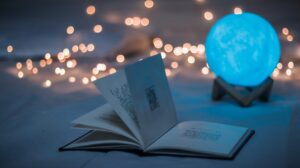 Photo by Dollar Gill on Unsplash

I’ve mentioned before how the news often clusters around overly-appropriate themes. That is once more the case as we enter the season of looking forward and looking back. The first items in this week’s news are very much looks to the past and the future.

First, a story we heard a lot about 3 years ago, and we’re going to be hearing a lot about again in the coming year. Last week’s election means Brexit is almost certain to happen on January 31st next year, with a brief transition period coming to an end on December 31st. That is all the time the U~K and EU have to put together a new trade deal. If they don’t there will be a so-called “No Deal” Brexit. Galley Beggar Press’s Sam Jordison raised a very particular concern about a No Deal. Books are complicated products to put together. Not only tariffs but the necessity to designate a country of origin for a book could become a logistical nightmare. Indies already struggle with pricing and logistics for paper books. The struggle may be about to get harder

This week also saw a fascinating post looking at the way audio may change over the next decade. Crystal ball gazing is always tricky. But one piece of audio news that is very concrete and could have a massive impact is the launch of Suno. Suno is Amazon’s subscription audio store based in India, expanding its offering beyond Audible.

I was surprised to learn that Kobo has just celebrated its 10th anniversary. That makes it substantially younger than Smashwords and Kindle. It’s interesting how far Kobo has come in that time. They brought out an ereader after the Kindle. And Kobo Writing Life followed KDP. But Kobo has not become just a me-too Amazon clone. It is, of course, now Rakuten Kobo, having teamed up with the etailing giant. But most of all, it has positioned itself cannily within the literary market. One key move has been Overdrive, which means that your Kobo books can now feature in the world’s libraries. And the partnership with Findaway Voices means your audiobooks can have a flexibility not possible through Amazon. Here’s to the next 10 years.

As indies, discovery is our holy grail. The platforms we use know that, and are constantly trying to lure us by dangling “better discovery” at us. Many of the acquisitions and partnerships I report on are attempts to improve discovery. First up this week is PublishDrive, who have added Hoopla and Dreame to their distribution channel.

Storytel are explicitly out to improve discovery by partnering with Clipsource. They will be opening a new media centre, tapping into Clipsource’s key position in media discovery.

Finally two interesting items on the theme of reading. First up, a new competition – always something of interest. The Jolabokaflod Reading for Pleasure prize is of particular interest to me as it’s not a regular writing prize. The £500 first prize is for 500 words. But not words of flash fiction. Rather, the winner will be the best idea for getting people reading for pleasure!

Second, an interesting initiative from Selfpubcovers. The company – which supplies, well, you guessed it – covers to self-publishers – is partnering with Pro Literacy. Through December they will be donating $5-10 for every cover published to improve the literacy of the American adult women who struggle with reading.

Were you self-publishing 10 years ago? How has it changed since you started? Let us know in the comments below.