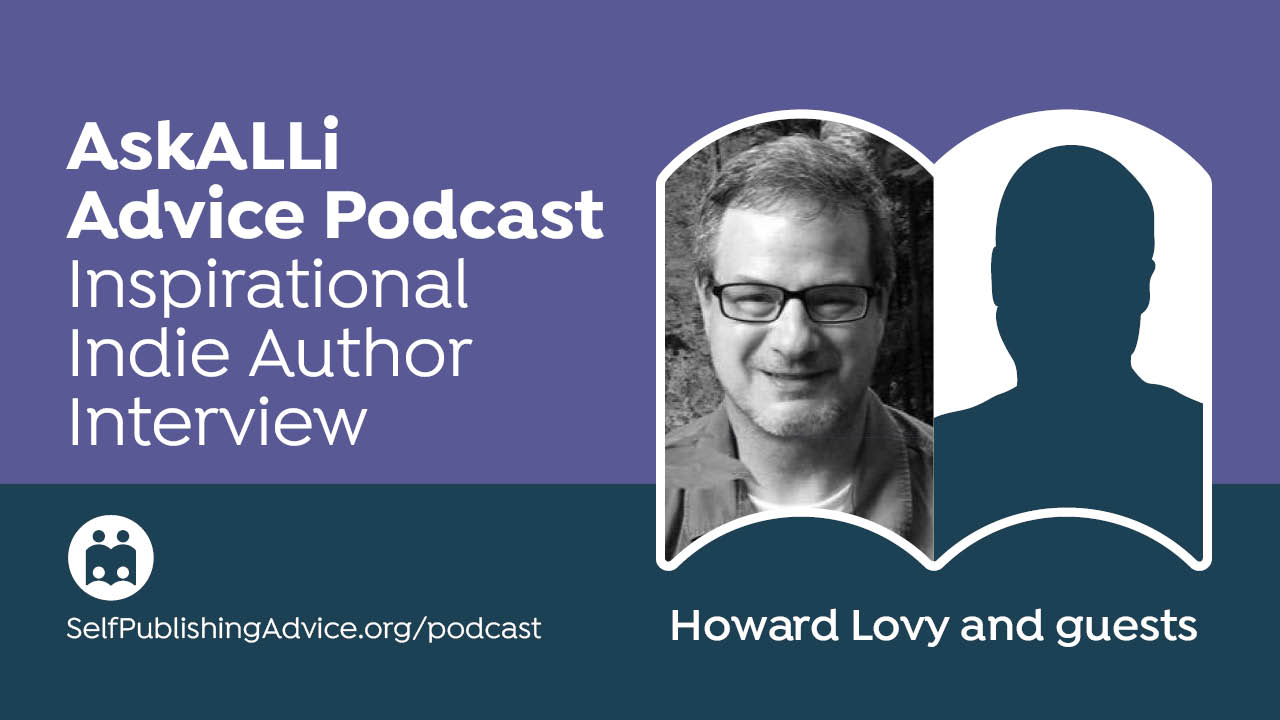 My guest this week is Chris Calder, a writer who discovered his voice later in life. In his 70s, in fact. He had been diagnosed with cancer and, during his treatment, decided that there really wasn't any more time to put off a writing career. So, he penned his first novel in the hospital. Now, at the age of 82, there have been four more and he shows no signs of slowing down. 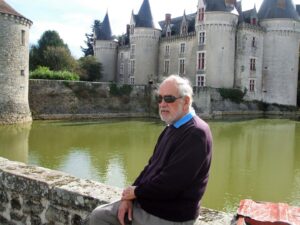 On Writing Later in Life

Really, if you want to write you should get on and do it. Life experience can't be bought. I'm in my 80s. Now, the older I get the more I regret not having more time. I remember reading somewhere Winston Churchill, when he was 65 and became prime minister of this country, is alleged to have said “so much to do, so little time.” And that, I suppose, is how I feel.

Listen to My Interview with Chris Calder

On Inspirational Indie Authors, @howard_lovy interviews Chris Calder, an author in his 80s who penned his first novel as he was being treated for cancer. He hasn't stopped since. Click To Tweet

Howard Lovy: My guest this week is Chris Calder, a writer who discovered his voice later in life, in his 70s in fact.  He had been diagnosed with cancer, and during his treatment decided that there really wasn't any more time to put off a writing career. So, he penned his first novel in the hospital. Since then, there have been four more and he shows no signs of slowing down.

Chris Calder: Thank you. Howard I'm delighted to be here. I write as Chris Calder and came to writing quite late in life, in fact of an age when most people have ended their live or have it ended for them. I was 73, been writing on and off for years, but never, never, ever believed I could do it on novel. As it happens, my wife and I were in, in France we had retired. I was in fact diagnosed with cancer and in hospital, recovering from a second op, and the cancer is now history. So, I was lucky there. I couldn't communicate with the people around me, which was extremely frustrating, because I like to talk. Simply that my French skills were nil at the time or very bad. So I got the pen out and sketched out the bones of a story based quite loosely on some of my more bizarre experiences, as the owner of a small engineering business and it was published and to my amazement, people bought the thing.

Howard Lovy: Chris Calder was born in a different era, in British history.

Chris Calder: Yes, it's a very different country now, of course, but then it was a hell of a long time ago. Yeah, I was born in India, I had the good fortune, or not, depending on your point of view to have been — had my own formal schooling in what was known as a Hill School, no phone, no papers, no connection with the outside world at all. But it was a glorious, privileged position to be in. I've never forgotten it, and always been grateful to fate for giving me that ace in my hand.

Howard Lovy: Although he had a successful business career, and even has a few patents to his name, that confidence did not spill over into his writing.

Chris Calder: I suppose. Because writing is an intensely personal thing, as you know, businesses just business. I wasn’t– I wasn’t that successful. I was always lucky enough to been able to raise my family and reasonable comfort and we never lacked for anything. So, that was fine. I don't think the business instilled any confidence in me and it's a different thing altogether. Isn't it I mean, writing is intensely personal.

Howard Lovy: But it took a life-threatening illness. To finally convince him that the time was now to pick up a pen and paper.

Chris Calder: I'm actually glad I got it. This is this is going to sound strange, weird, but the fact is had I got the bout of cancer 15 years earlier, I wouldn't be talking about it. Because this was all seven or eight years ago now. The surgeon was a super guy, his English was much better than my, oh much better than my French, but there was still communication problems. He went through it thoroughly and said, this is what will happen, this is what we'll do and we will beat it. And I kind of thought, is he saying that to make me feel better? Or because that's what might be expected, he might be expected to say, in fact, he was right. I had some chemo. In my case, I felt kind of a fraud because although I do have some plastic plumbing, which I managed perfectly well, it doesn't stop me doing anything that I want to do. I’m alive, you know, and that's that really, you're quite right it was a life changing experience. Although at the time, I didn't realize it because I wrote the book had it edited, and then to my astonishment, it did reasonably well. When I say reasonably well, I was not expecting anything, frankly. But yeah, it was fun.

Howard Lovy: For his first book, Payback, he thought back to a real brush with the law that he had when he was a businessman.

Chris Calder: Well, it's about electronic engineer designer of control systems for lamps that kind of thing, okay, what then happened; Listen, this is interesting, this I hope will be interesting. We used to import our heat exchangers from Holland. One day we had a visit. Our little factory was not very big in North Hampshire, and we had a visit from the flying squad and the flying squad and the drug squad and the local police, it kind of all came at us from every direction. And we hadn't the faintest idea what this was about. I was not in the factory terminals actually on my way home, got a call on a mobile dashed back and there's these large gentlemen swarming around poking into everything. And I said, “What's going on?” And he said, well we sat down and within a few minutes it was clear, I had no idea that there was something wrong with what had happened. What happened is we've had, a heat exchanger delivered four days previously, and it had been followed all the way from Holland through our place and because we imported it, out to a customer who picked it up, and he was a Dutch guy. Apparently, it was full of happy pills, happy pills, the chamber, the void if you like, between the heat box and the surrounding box, was full of little bags, full of purple pills.

And basically, it was obvious that we knew nothing about we just kind of had the thing and when it came in and went out.

The protagonist is a man called Jeff Summers and he basically designs control systems for a burglar alarm company. Okay. And there's a preface now I’ll read that.

Jeff Summers turned to look at his wife wishing beautifully for her hand as the doctor leaned forward and placed a document on the desk between them. This is the schedule of treatment we propose, he said softly, but we need to do a few more tests. His manner was sympathetic is brow lined with pharaohs of experience. He smiled thinly, one step at a time, Jeff turned to Penny again and yet she was there yet not there. Her image was surreal it had begun to fade. That was the moment when Jeff realized that he was once again in the dream. That recurrent dream, unreality seemingly real. He looked back at the doctor's appearances morphing before his eyes gone with the kindly expression, the sympathy, and the dark hair. The man he saw was now round faced, bulging eyes, behind tinted spectacles, an image that was menacing and intimidating. It was Ford, Adam Ford, the bastard. He looked to his right but Penny was not there anymore. At that point, the dream ended abruptly, instantly tipping him back into reality, so that he became immediately aware that he was Jeff Summers masquerading as John Jeffries, living the lie, is drenched in sweat, had 1000 hammer headache. The anger returned, the emptiness, the frustration, that a bitter recollection of what had happened since the interview with specialist only four months ago, glanced at the bedside clock. It was 630. So, he knew that mostly could be impossible. They rose to face another day. He knew also it would be a day like no other because today when he was to take the first indivertible steps towards his new life.

Howard Lovy: And from there he went with a thriller of a story and he hasn't stopped writing thrillers.

Chris Calder: I so enjoy doing Payback, but I thought, I have to do something else. So, I did another one, which was about an earth orbiting plane. I tried to inject a little bit of humor into all the everyday situations in my books. And it just, you know, occasionally you'll go through something serious and then, there's something will happen, which I hope puts a smile on your face.

Howard Lovy: Chris has written five books that are still going strong, at his age he said, “it's best not to stop and just get on with it.”

Chris Calder: Really, if you want to write you should get on and do it. Life experience can't be bought. Should I say this, I don't know. I'm in my 80s. Now, the older I get the more I regret not having more time. I remember reading somewhere Winston Churchill when he was 65 and became prime minister of this country, is alleged to have said “so much to do, so little time” and that I suppose is how I feel.