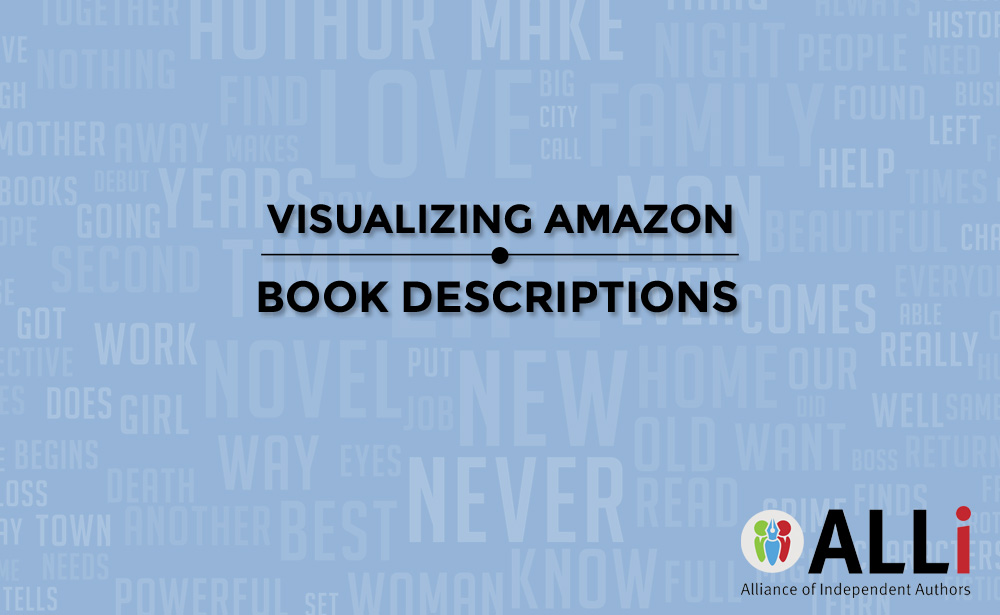 I've been dog-paddling through Amazon's sea of data quite a bit lately, and book descriptions have repeatedly caught my attention. The data I gathered raised a multitude of questions.

Are there common words in the description of best selling books? Are these terms clichés, or dependable tools, or a bit of both?

Why are so many thrillers described as “gripping”? If thrillers grip, what do other genres do?

Why do nearly 1 in 10 descriptions of Historical Mysteries feature a character named Thomas?
Who is this guy?

These are the questions that haunt my nights. Rather than waste the midnight hours with trivial endeavors like sleep, I dissected over 2000 book descriptions in Amazon's Paid Best Seller charts (US) to divine their secrets.

I can't resist a good data visualization, so I also took the opportunity to craft this data into a series of word clouds. The word clouds are based on the top 200 words (give or take a few) in each genre, minus the articles and conjunctions and other linguistic riff-raff. Rather than counting the total number of words, the word clouds map out the number of unique titles that feature that word in their description.

You can click on any word cloud to view a larger version. They're lovely to stare at when you should be writing and need something writing-adjacent to justify your procrastination. 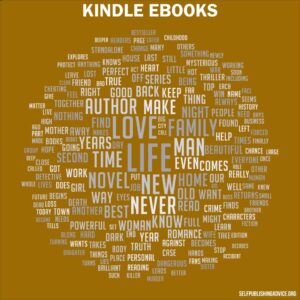 The top level of Amazon's ebook hierarchy provides an overview of common words used across all genres.

It's a well-known fact that books nourish the soul. I was pleased to see LIFE and LOVE at the top of nearly every category's word lists—even in Horror. Although LOVE tops the list by a significant margin, we also find a high number of romance-related terms like HEART, TOGETHER, CHEATING, and ROMANCE itself. (ROMANCE appears in the list even if you exclude its use as a genre: “just as their romance is deepening,” “her forbidden romance,” etc.)

Elements of plot and setting abound. MAN, WOMAN, FAMILY, and HOME are well represented in descriptions across all genres. MOTHER and DAUGHTER make the list, but curiously, FATHER and SON do not. Perhaps this supports the theory that women read more than men?

References to the books themselves are common: AUTHOR, NOVEL, SERIES, READ, BOOK, DEBUT, STANDALONE, CHARACTERS, PAGE/PAGES (as in “will keep you turning the pages”) and BESTSELLER appear frequently.

A disproportionately high number of Thrillers are described as GRIPPING. That's a phenomenon I saw repeated in a number of genres: Mysteries tend to be RIVETING. Crime Fiction is CHILLING. Suspense is POWERFUL.

For lack of a technical term, I refer to these descriptors as “magic adjectives.” To qualify for that status, a word must appear more often in that category than any other; it must appear in a significant percentage of descriptions; and it must apply to the book rather than the author or elements of the story. 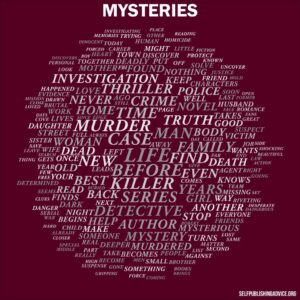 Despite heavy overlap between the five categories in this section, Mysteries are ranked #1 for the terms CASE, MURDER, TRUTH, INVESTIGATION, DETECTIVE, DEAD, and DEADLY. Furthermore, the frequency of each of these terms is at least 5% higher than any other genre. 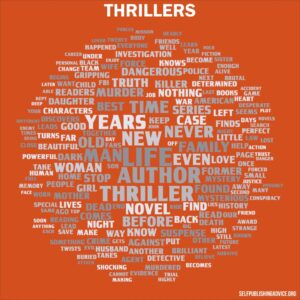 Thrillers also had more than a 5% lead on occurrences of the words FORMER, DANGEROUS, FORCE/FORCED, and BRILLIANT. FORMER referred to roles or occupations (fashion model, special agent, adversary) 88% of the time. Of those roles, former agents and former colleagues accounted for 16% each, while former lovers accounted for only 5% of those descriptions. BRILLIANT referred to the book in 53% of its usage, and to a character or their actions in the other 47%. 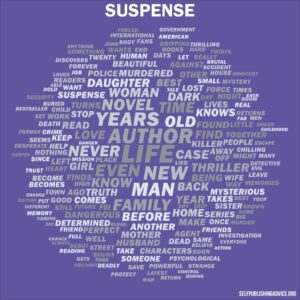 Suspense descriptions align closely with Thrillers in word frequency, but tend to be shorter, with an average of 253 words. 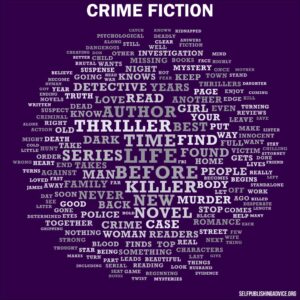 KILLER appears more often in Crime Fiction than any other genre, although Mystery is close behind.

Other popular terms in Crime Fiction (more than 5% above other categories) include DARK, GIRL, MISSING, and BLOOD. 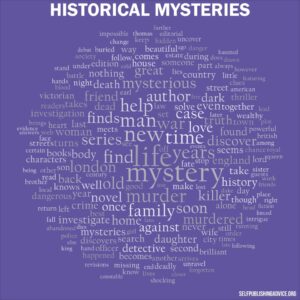 7% of Historical Mysteries identify themselves as REGENCY stories.

Children's eBooks and Teen & YA 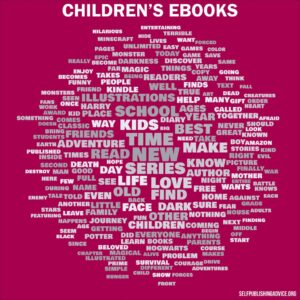 The magic adjective for Children's eBook descriptions is ENTERTAINING.

In Children's eBooks, kid-centric themes like SCHOOL, HOME, FAMILY, and ADVENTURE are plentiful. The influence of J.K. Rowling's Pottermore imprint is felt strongly here, peppering the list with terms like HOGWARTS and HARRY POTTER. 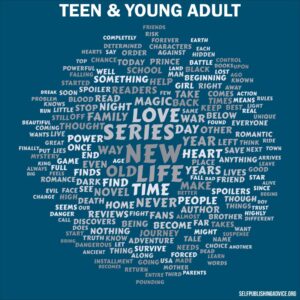 Teen & YA books closely mirror their adult counterparts, with more serious themes and descriptions that focus on both story elements and book promotion. Descriptions tended to be shorter than other categories, however, with an average of 217 words.

On the story side, Fantasy is strongly represented in terms like PRINCE, MAGIC, WAR, and POWER (used primarily in a supernatural sense).

On the promotional side, the usual book-related terms dominate (READERS, SERIES, NOVEL, REVIEWS, etc.). One notable standout is FANS, which appears 50% more often than the overall average.

The magic adjective for Teen & YA fiction is ROMANTIC. Outside of this category, ROMANTIC appears only in a few, scattered instances under Historical Romance, Historical Fiction, Romance, and Erotica.

The border between Erotica and other categories on Amazon is quite porous, and the category with the greatest overlap is Romance. 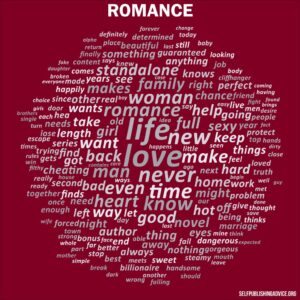 The magic adjective for Romance is HOT, with SEXY (a descriptor shared with Erotica) tied for second place.

HEART ranks high on the word frequency list for Romance at nearly three times the average for other genres, and nearly a third higher than Erotica. Terms that ranked significantly higher than other categories include: WOMAN, BACK, WANT, CHEATING, STANDALONE, FULL LENGTH, HARD (41% “difficult,” 25% “intense,” 20% explicitly sexual, and 14% “solid”), PERFECT, KEEP, BAD BOY, and CHANCE.

The average Romance description aligns with the median length for all genres, around 257 words. 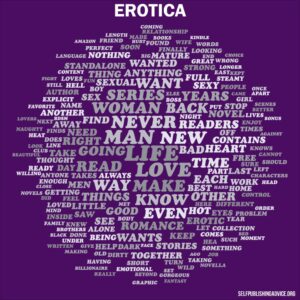 Erotica is a unique category in several aspects. It features more words unique to the category than any other. Erotica descriptions tend to be shorter than average, around 220 words, and favored more first-person narratives than other categories.

The Top 100 list in Erotica is also notable for an unfortunate reason. Best sellers in this category committed more obvious violations of Amazon's policies than the other categories I examined. That's by no means a reflection on the genre as a whole, but it does point to Amazon's lack of enforcement in this area, and to the willingness of some authors to exploit that laxity to gain an advantage in a competitive environment. 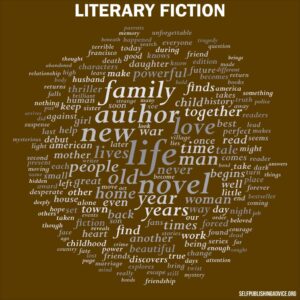 The broad category of Literary Fiction leans much more heavily towards author credentials and critical praise than most categories, likely due to its preponderance of big-name authors across multiple genres. Key terms include NOVEL, AUTHOR, NEW YORK TIMES, ACCLAIMED, GREATEST, WORK OF FICTION, and BEST SELLER.

Literary Fiction's strongest contender for a magic adjective is BEAUTIFUL, which appears in 16% of the category's descriptions.

Descriptions run long at an average of 281 words. 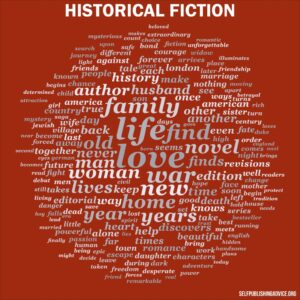 Certain book-related terms unusual for other categories are frequent occurrences here, including EDITION (for which Historical Fiction has the highest usage), EDITORIAL, and REVISIONS.

The magic adjective for Historical Fiction is MOVING. The average length of descriptions in this category is 246 words, close to the median for all titles. 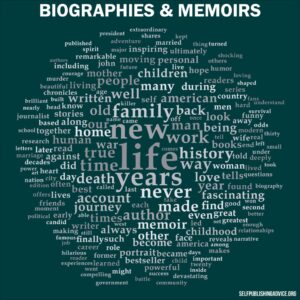 Fittingly, the most popular word in Biographies & Memoirs is LIFE, which appears more often in this category than in any other.

Like Historical Fiction, terms of time, place, and family are strongly represented, along with a high number of words unique to the genre. The best-represented terms are ones you might expect from a memoir: ACCOUNT, MEMOIR, PORTRAIT, CHRONICLES, CHILDHOOD, JOURNEY, RESEARCHED, and TELLS/TOLD. We also find AMERICAN, ENGLISH, CHILDREN, WRITTEN, GREATEST, MODERN, and HUMOR/HUMOUR in at least 10% of these descriptions.

The magic adjective for Biographies & Memoirs is FASCINATING, featured in approximately 1 in 5 descriptions. INSPIRING is also seen, although to a lesser degree. Descriptions averaged 291 words, higher than most genres. 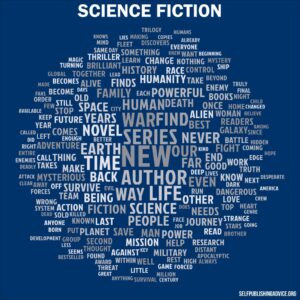 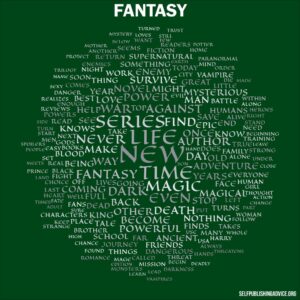 The magic adjective for this category is EPIC. Descriptions average 234 words. 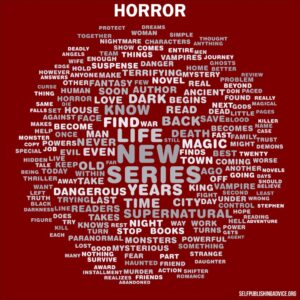 The trend towards multi-genre placement is extremely evident in Horror, as authors in competitive categories seek out their less-ideal, but less-crowded neighbors. With only 99,000 titles in Horror, it's a tempting target for incursions by Fantasy (201,000 titles), Erotica (288,164 titles), and even Romance (442,000 titles).

The magic adjective for Horror is SUPERNATURAL. Descriptions average 219 words.

Nonfiction is a high-level category that encompasses disparate subjects ranging from Memoirs to Business to Medicine to Cookbooks. As a result, the most frequently used words come from a hodgepodge of genres, but we can still see a few interesting patterns in the descriptions. 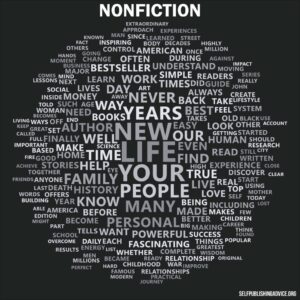 If you exclude Biographies & Memoirs (which comprise a large percentage of the Nonfiction best sellers), Nonfiction descriptions tend to focus on two areas: what the book can do for the reader, and the author's experience and background.

The magic adjective for Nonfiction is EASY. Descriptions average 272 words. 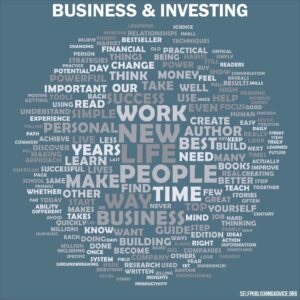 Like a majority of categories, LIFE is the #1 word. The #2 word is PEOPLE. And in line with this surprisingly human focus, the magic adjective for the category turns out to be PERSONAL.

It's important to note that much of this information falls into the realm of trivia. Including the most common words for a genre in your book's description is more likely to create word salad than to catapult that book into the Best Seller charts.

Nevertheless, we can gain useful insights by scouring the descriptions of best sellers in our preferred genres.

Researching the competition is a crucial step in developing your marketing materials. There are millions of titles on Amazon, and each one is an experiment to discover what attracts readers. When those experiments land a title on the Best Seller list, you can study, adopt, and adapt those successful techniques to your own books.

OVER TO YOU
What trends have you noticed in book descriptions? Join the conversation below! And If you enjoyed this article and the word cloud graphics, please feel free to share them.