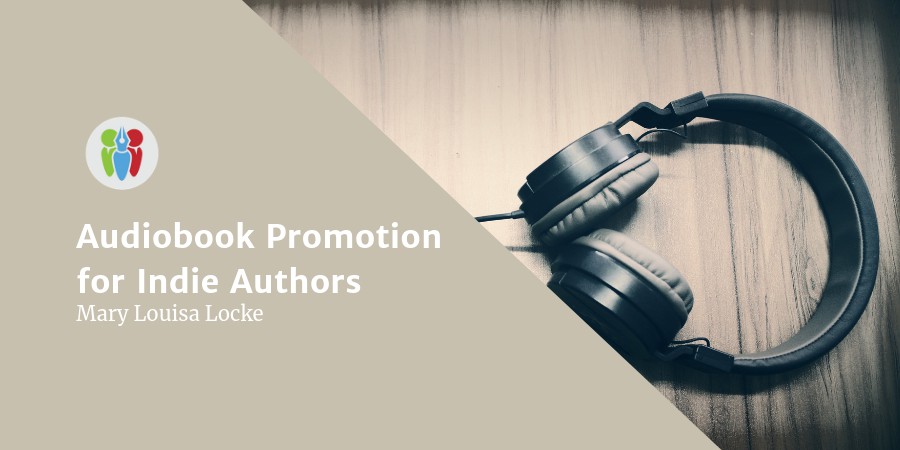 We've been focused on audiobooks this month, with posts on the future of audiobooks, how to narrate them, and many more. But today brings something a little different. Today, author member Mary Louisa Locke looks to audiobook promotion and marketing.

In my recent post, I  discussed my decision to stop distributing my audiobooks exclusively through ACX so I could go wide with Findaway Voices. The primary reason I took this step was the marketing opportunities Findaway Voices offers, including their partnership with Chirp, the new audiobook promotional site that Bookbub has started.

Pricing competitively, discounting the first book in a series, and promoting temporary price reductions have been my most successful marketing strategies for my ebooks. However, all three strategies require that I have control over the price of a book, which I didn’t have for my audiobooks while they were distributed exclusively with ACX.

With Findaway Voices, I can set my own prices (for all the stores but Audible), which means I can experiment to see what price points work best. For example, with Findaway Voices, I have set the list price of Maids of Misfortune, the first audiobook in my Victorian San Francisco mystery series, at $9.99 (a sixty percent discount from Audible’s full price). Findaway Voices also arranges monthly promotions, like the one they are running in August with Apple Books, Nook, and GooglePlay, among other retailers. Using both of these tools should, over the long term, result in increased sales.

However, it was Findaway Voices’ notification in early March that they were partnering with Chirp that made me decide to take all my eligible books out of ACX exclusivity and upload them all to Findaway Voices. Much to my surprise and delight, soon after my last book went up on Findaway Voices, I got an invitation to participate in a Chirp promotion while they were still in beta—and I jumped at the chance.

My experience with this promotion confirmed my speculation (and that of other authors) that the introduction of BookBub into the promotion of audiobooks could be a game changer for indie authors and audiobooks.

Maids of Misfortune was featured on Chirp for 99 cents starting June 17. Two days later, the book was featured on the email sent to subscribers who had chosen to hear about mysteries and thrillers. It then remained visible on the Chirp website site until July 8.  The sales numbers and royalties were posted daily on my Findaway Voices dashboard—and it was through Findaway Voices that I got paid.

By the end of the promotional period, I had sold 1296 copies. Since my royalty for each sale was 45 cents, I made a little under $600—all profit since I didn’t have to pay for this promotion. I assume that part of the beta testing is to determine what they will charge authors in the future.

What was most heartening to me about this promotion was how well my book did in competition with the traditionally published books that made up the vast majority of the books promoted on Chirp during those three weeks. In the book’s last week on Chirp, Maids of Misfortune was outselling popular books like McCall Smith’s The No.1 Ladies’ Detective Agency and M. C. Beaton’s Agatha Raisin and the Potted Garner.

What Does This Mean for Audiobook Promotion?

While I've had all my books in Findaway Voices for less than four months – so I don’t have a lot of data yet on sales – the signs are very promising. If I don’t count the money I made from the Chirp promotion, I've still made up for what I lost by shifting to a non-exclusive strategy. Counting the Chirp revenues, I've actually made more in total audiobook sales this year than I was making when I was exclusive with ACX.

What I don’t know yet is if promotional activities—like lower price for my first book in a series or participating in other retailer promotions––will result in increased sell-through for my books outside of Audible—which would significantly increase my profits from audiobooks over all.

As with ebooks, going wide as a strategy is not for every author—or every audiobook. Authors who need to do a royalty share contract to pay for a narrator will probably still want to go exclusive with ACX, at least until Findaway Voices rolls out it’s royalty share option. If an author’s audiobooks are standalones, or they don’t have a lot of books in a series, the promotional opportunities that I've mentioned above might not be effective enough to counter the loss in ACX revenue…at least in the short term.

On the other hand, I think that indie authors who have the capital to invest in paying a narrator up front, have books in popular genres and series, or have non-fiction audiobooks (Joanna Penn has seen a significant increase in her audiobook sales) need to start seriously considering going wide and taking advantage of the marketing opportunities this will give them in the future.

Otherwise, I believe indie authors risk missing out in staking a claim to the fastest growing sector of the publishing industry, a trend that shows no sign of weakening and one that will probably accelerate with the spread of voice-activated technology. As Penn has pointed out in a recent podcast, “…if you don’t have audio content…by 2025 you will be invisible to the voice-first devices.”

This means that if indie authors want to be in a position to compete against traditionally published authors in this future world, they need to make sure their work is available in audiobook form, accessible on a variety of devices, priced competitively, and they need to figure out how best to market those books. Additionally, for now I believe taking advantage of the opportunities offered by Findaway Voices is the best way to prepare for that future.

What do you think of Chirp's promotions? What audiobook promotion tactics are you using?

How to Reduce Reverberation for Better Self-Published Audiobooks and Podcasts

M. Louisa Locke, a retired professor of U.S. and Women’s History, has embarked on a second career as the author of novels and short stories set in Victorian San Francisco that are based on Dr. Locke's doctoral research on late 19th century working women. More about her work can be found at http://mlouisalocke.com/