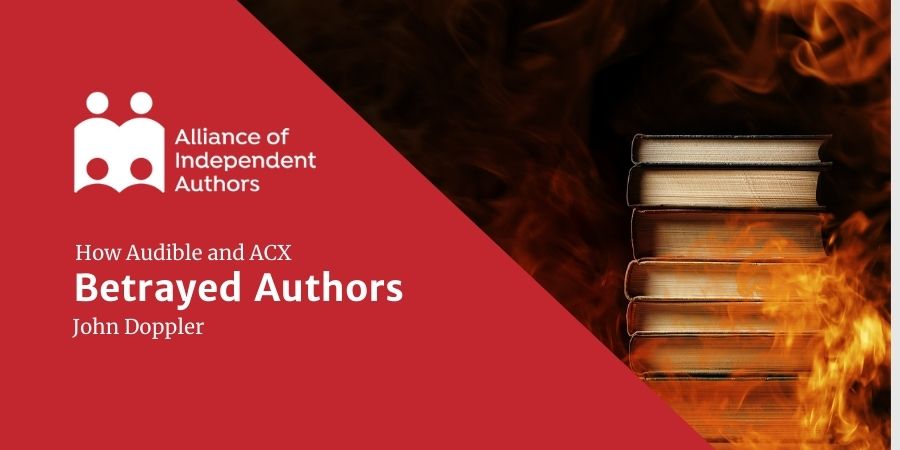 The Alliance of Independent Authors has launched an AudibleGate Campaign resource to disseminate information about the latest developments in this case. There, you'll find breaking news, a summary of the issues, and information on how you can take action to demand a fair deal for rights holders, click here. Below ALLi Watchdog John Doppler explains what's going on and why the company's recent “concession”  of a seven-day limit on returns misses the point, and is wholly insufficient.

Imagine, for a moment, that you're a salesman. You sell widgets to the public, and for every widget that's sold, you get a commission.

Friday arrives, and you glance at your paycheck to discover that it's roughly half what you were expecting. So, you stop by Accounting to ask them to correct the mistake.

“There's no mistake,” says Rita, the lead accountant. “You just had some returns.”
“But my check is less than half of last week's!”
“Yes, there were a lot of returns.”
“Half of my sales this week were returned?”
“Oh, no, we have a no-questions-asked return policy, and some of the customers you sold widgets to last year decided they wanted to exchange theirs for an alternative. Those were deducted from your pay.”
“Oh my God, is that what those signs out front are for? The ones that say ‘exchange your widgets at no charge'? Am *I* the one paying for those?!”
“Yes, but I don't see why you're upset. It makes for a great shopping experience for the customer!”

This is a ridiculous scenario, but substitute audiobooks for widgets, and you've got a general idea of what Amazon's Audible and ACX platforms are inflicting on indie authors, and perhaps other publishers, right now.

Even though their books were fully listened to and enjoyed, even though they and their narrators and producers were the ones who invested in the book's production, they don't get a dime.

Thanks to Audible's heavy marketing of their “easy return and exchange” feature, readers now treat Audible as a lending library. And authors and narrators are paying for it.

But wait, it gets worse.

Your paycheck is not your concern.

“That's outrageous! I sold those widgets in good faith! Now you're taking my commissions back because WidgetCo decided to offer an exchange?”
“Pretty much. And, uh… confidentially, I'd save that money if I were you. Mitch had so many exchanges, it canceled out his entire paycheck! Poor guy.”
“This is insane. How many returns was I charged for? I don't see that on my paystub.”
“That information is confidential.”
“…”
“Sorry.”
“But how do I know these figures are accurate if I don't know how many exchanges I was charged for?”
“We calculate all that for you. You'll just have to trust us that it's correct.”
“I don't.”
“Well, you can always find another job. Of course, we do own 90% of the widget outlets in the world, so good luck with the remaining 10%. And then there's that 7-year contract you signed. But really, it's not so bad: as a thank you for being a loyal WidgetCo employee, you've got a 5% bonus on your December sales coming up!”
“A 5% bonus isn't going to make up for months of sales that have been taken away from me. I'm missing ten times that from my paycheck!”
“That's true. But if you're lucky, it will cover some of next week's exchanges! Silver linings, right?”

Not only is Audible/ACX clawing back royalties previously paid, they're hiding the number of returns deducted from the author's payment. They do this by reporting only “net sales”, the actual number of sales minus any deductions for returns. Authors who ask for a basic accounting of the number of returns charged to their account have been flatly refused, and without that information, authors cannot get the accurate accounting required of any reputable publisher or distributor.

This deliberate obfuscation is perhaps the most egregious part of Audible/ACX's policy, and the part of the scheme that may land them in legal trouble — or in more Congressional hearings in the US and other places, as Amazon faces renewed calls for stronger anti-trust regulation around the world.

Because only net sales are reported, an author who sells 50 books may only see 20 sales on their report. They have no way of knowing that 30 additional sales were zeroed out thanks to Audible's “generosity” to its customers. To the author, it just looks like a slow month for sales.

Only when the number of returns exceeds the number of sales, leaving the author owing Audible money, does it become obvious that Audible has been drawing from the wallets of its content creators. One author had over 100 returns debited to their account, obliterating their income for the month. Others are still being debited for returns on audiobooks that were removed from sale nearly a year ago.

Oops. You caught us! Here's a little bit of your money back.

This scheme might have gone unremarked had it not been for an error in reporting last October that caused 49 days' worth of exchanges to be deducted from authors' accounts all at once. This tipped off unaware authors and publishers, provided a glimpse of the staggering extent of the practice, and triggered the storm of outrage and campaigning by authors and authors groups, now dubbed #AudibleGate.

As the story broke, and ACX and Audible were flooded with media inquiries and author complaints, they sent out an email reassuring authors that abuse of the Easy Exchange program was “extremely rare”, and announced that they would take author concerns “very seriously” as they reviewed the policy. As an indication of how seriously those concerns were being taken, ACX offered a 5% royalty bonus for the month of December.

Five. Percent. While some authors had 100% of their month's income stripped away, and others were left in the dark about how much money Audible/ACX have taken from them since the inception of the program.

But really, it's not so bad: as a thank you for being a loyal WidgetCo employee, you've got a 5% bonus on your December sales coming up!”
“A 5% bonus isn't going to make up for months of sales that have been taken away from me. I'm missing ten times that from my paycheck!”
“That's true. But if you're lucky, it will cover some of next week's exchanges! Silver linings, right?”

What they conspicuously did not do is agree to release the accounting of how many books are being sold, and how many of those sales are being negated by returns.

Audible/ACX also failed to acknowledge the fact that individuals who tested the program were able to listen to dozens of audiobooks to completion, and exchange them for another. In one case, an individual found they could exchange 50 books in this fashion without any intervention or consequences from Audible.

Predictably, authors were unimpressed the response from Audible/ACX, and the campaigning continued.

It's not a big deal, guys. You just lack perspective.

Shortly after, ACX sent out another email to authors. In it, they again reassured authors that fraud is rare and exchanges are carefully controlled, and expressed hope that their explanation of the program's intent would “convey perspective to our valued writers and ACX partners”.

They then announced that in recognition of authors' concerns, starting January 1st, the Easy Exchange program would only affect authors' income if the return occurred within seven days.

While this is a welcome improvement to the unreasonably long 365-day grace period, it still does not address the core issue of transparency in accounting. How can any of those allegedly “valued” writers, narrators and publishers trust Audible/ACX while the companies continue to distort and obscure the basic accounting in the royalty reports?

The most vital obligation of any publishing partner–publisher, distributor, or self-publishing platform–is accurate and transparent accounting. Without it, there can be no trust between the author and the service. That's a fundamental truth of business relations, and Audible's “perspective” does not alter that in the slightest.

ALLi insists that Audible must reverse this practice completely. Author-publishers must only ever be liable for true returns, where less than 25% of the book has been read. The wrongdoing must be acknowledged and any monies wrongly deducted must be returned.

The #AudibleGate Campaign: What you can do

Sign our breaking news, a summary of the issues, and information on how you can take action to demand a fair deal for rights holders.