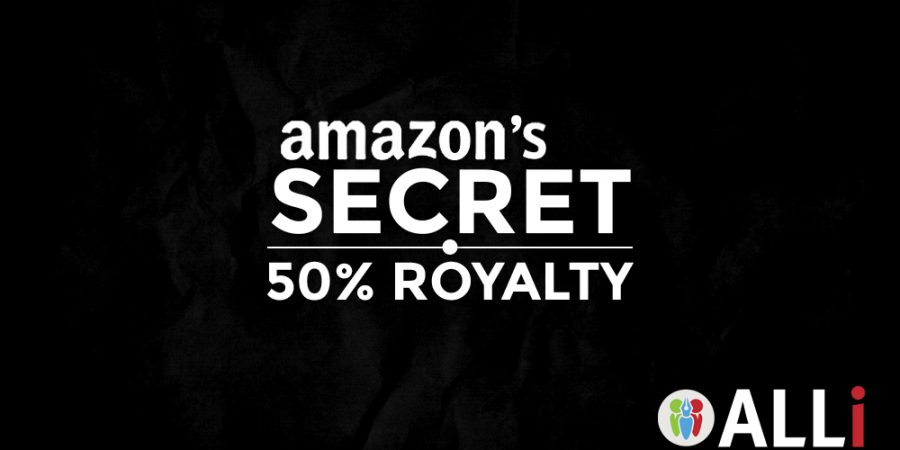 On Monday, an error on KDP's site gave us a brief glimpse into the future. Nestled between the existing 35% and 70% royalty plans was a new option, a 50% royalty rate. The errant option could not be selected and had no documentation or delivery fees listed.

It was quietly removed the following day. During the short time it was visible, the 50% option was only available on titles priced between $2.99 and $9.99.

Clearly this was an error on Amazon's part (and they have stated as much), but the existence of this unutilized option raises questions about their plans for KDP authors.

Let me stress that at this point, we have no concrete information beyond the brief appearance of the 50% option. We can only speculate on possible explanations, a few of which appear below.

Hypothesis #1. Amazon plans to reward exclusive content (and penalize those who go wide).

This is the rumor that's causing the greatest consternation among indie authors. By restricting the 70% royalty tier to exclusive content, Amazon could make an aggressive bid to push authors into exclusivity, increasing the number of titles in Kindle Unlimited and tightening Amazon's grip on the market. Authors who go wide could see their Amazon royalties cut by 20%.

Hypothesis #2. Amazon will offer a lower royalty rate, but would allow authors to opt in to Kindle Unlimited on a non-exclusive basis.

What if you could trade a bit of your Amazon royalties for access to KDP's Global Fund, while still participating in the larger global market for ebooks?

A 50% royalty option might allow authors to participate in KU without sacrificing their independence and wider reach. KU could see an influx of fresh, popular titles, including blockbusters from publishers that have eschewed KU's exclusivity in the past.

This is admittedly an unlikely hypothesis given Amazon's desire to control as much of the global readership as possible. Nonetheless, one of the principal objections to KU is the restriction that titles be exclusive to Amazon. A compromise of lower royalties in exchange for waiving exclusivity could bring fresh life to KU, and new opportunities to authors.

Hypothesis #3. Amazon will offer a compromise for books with large file sizes and higher pricing.

One reason for the 35%/70% royalty split was to provide publishers with large file size titles an affordable alternative to Amazon's digital delivery fees. An intermediate tier could offer more flexibility in balancing royalties and delivery fees.

Hypothesis #4. Amazon plans to encourage a specific price point for ebooks by creating an intermediate tier.

Another reason for the 35%/70% royalty tier structure is to encourage publishers to stay within Amazon's preferred price range, $2.99 to $9.99 (or £1.99 to £9.99 in the UK). By creating a new, preferred class at, for example 70% at $5.99 and above, Amazon can incentivize higher-priced ebooks and increase their bottom line. If this interpretation is correct, it could counter the perceived devaluation of ebooks by a glut of free and $0.99 titles.

Hypothesis #5. Amazon wants to tempt publishers away from the $0.99 price point and raise the floor of ebook pricing.

In line with Hypothesis #4, Amazon could also encourage a price shift in the lowest price ranges by providing authors of $0.99 titles a strong incentive to move up to $1.99 for their discounted titles. Titles priced below $2.99 comprise a huge chunk of Amazon's digital sales, and raising the floor of ebook pricing would have a corresponding impact on Amazon's revenue in that sector.

What Does It Mean?

At the moment, this is nothing more than conjecture. Amazon may implement one of the changes guessed at above, next week or years from now. They may surprise us — for better or worse — with a change none of us have foreseen. Or they may do nothing at all.

Whatever the future holds, this fleeting glimpse behind the curtain is an opportunity to reflect on three truths:

1. Amazon is driven by profits and market dominance, not benevolence towards authors, and the goals of the two are frequently in opposition.

2. Change is inevitable in the publishing industry, and when it comes, indie authors must be ready to adapt to it.

3. When you shackle yourself to a corporate behemoth, you go where it goes. If it decides to roll over to scratch its back, those who are bound too tightly to it may find themselves crushed underneath.

What's your take on the mysterious 50% option? Will this be good or bad for authors? Let us know in the comments below!