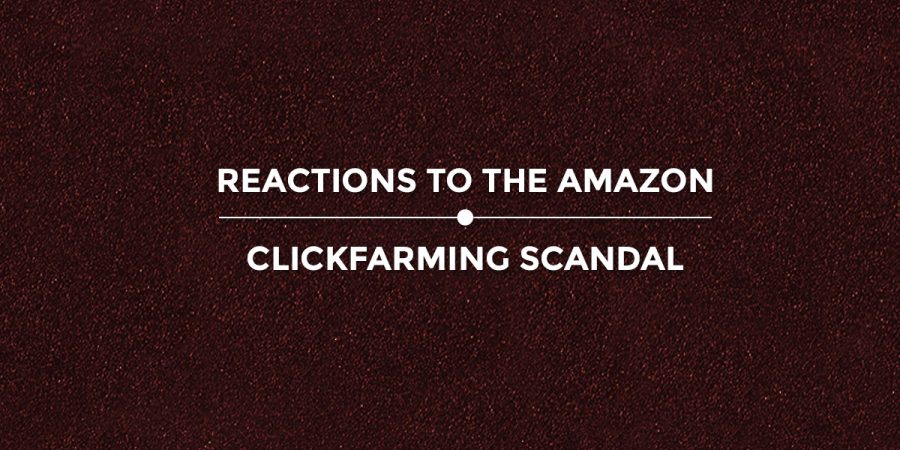 When David Gaughran exposed clickfarming scams that were manipulating the sales rank of books on Amazon, authors expressed a wide range of reactions.

Some — a substantial majority by my reckoning — were furious that scammers were reaping the rewards of a “best-selling” title.

Some felt it was a victimless crime, and not a big deal.

Some sympathized with the accused authors, who claimed they had no idea that the services they'd hired would use fraudulent clickfarming practices.

Some objected to the whistleblower naming the accused authors, a decision critics felt incited the harassment and negative reviews that followed.

And some were angry at the whistleblower for sounding the alarm, declaring that he should “mind his own business.”

There's a lot to unpack here. Let's wade in.

“What's the big deal? It's not hurting anyone.”

Clickfarming operations use cheap labor to fraudulently download (and sometimes read) copies of an author's book. This fraud is harmful in a number of ways.

Clickfarming and other forms of manipulation are not victimless crimes. Because of the nature of Kindle Unlimited, the victims of those crimes are not corporate giants like Amazon, but rather the indie authors who are simultaneously robbed of their rightful share of the global fund and shoved further down the slippery ladder of the best seller lists.

“Those authors made an innocent mistake.”

It would have taken extraordinary negligence and naiveté to hire a clickfarming service without having any idea that one was buying an illicit service. Each of the authors implicated in Gaughran's article not only denied knowledge of clickfarming fraud, they adamantly refused to identify the companies involved once the clickfarming was exposed.

The services we hire to promote our work are our proxies. They represent us to the world. It is incumbent on each of us to research these representatives to ensure they behave ethically and responsibly on our behalf.

It's possible, albeit remotely, that these authors were initially unaware they were hiring an unethical (and potentially illegal) clickfarming service. However, actively protecting those fraudulent services by concealing their identity goes beyond ignorance or negligence; it's complicity. That deliberate cooperation with scammers shatters any plausibility of the author's innocence. They have become willing partners in the crime.

The reason for their silence isn't hard to figure out. If they name the companies, people will investigate them. And it will become immediately obvious that there's no way someone could mistake these operations for a legitimate marketing service.

“The exposé is responsible for those authors being harassed.”

Once the news of the clickfarming scandal broke, dozens of people left vindictive, one-star reviews on the authors' books. Some critics upset by David Gaughran's exposé felt that his naming of the authors was directly responsible for the tide of harassment and vigilante reviews.

Let's be clear: targeted harassment of an author is never warranted. Those individuals who left one-star reviews on the authors' books or who spewed venom at them in email acted inappropriately and unethically. It's reprehensible behavior.

But is Mr. Gaughran's whistleblowing responsible for those vigilante actions? Absolutely not. These are human beings with agency and responsibility for their actions. Their misbehavior cannot be pinned on any other party.

“It's none of your business what other people do.”

On the contrary: protecting the health of the industry is the responsibility of the entire indie author community. Part of that includes confronting detrimental practices that harm our sales, undermine reader confidence, and damage the reputation of the community as a whole.

Dedicated watchdogs like Victoria Strauss of Writer Beware, David Gaughran, and The Alliance of Independent Authors perform a valuable service in ferreting out instances of fraud or deception. It can be a thankless job. Watchdogs are sometimes targets of criticism, harassment, and abuse by those unhappy with an assessment. Watchdogs have been targeted with 1-star revenge reviews. They have been threatened with frivolous lawsuits. They have been libeled. They have been called every name in the book, and a few invented just for the occasion.

And yet they persevere, because turning a blind eye to scammers and con artists would allow those bad actors to damage the industry we depend on. Novice authors deserve better than to be preyed upon by scammers and snake oil salesmen.

These exposés act as a deterrent to fraud, but they also highlight critical problems in systems like Amazon's KDP Global Fund distribution. Authors have a right to know about issues that may affect their Amazon income and sales rank, and industry watchdogs are often the only objective source for that information.

The Alliance of Independent Authors launched its Ethical Author campaign in 2014. The goal of the campaign was to highlight and support the ethical behavior of the vast majority of self-published authors. The campaign stands as a counterweight to tales of authors behaving badly, and an emphatic rejection of the notion that self-publishing is a lawless frontier where anything goes.

The Ethical Author Code continues to evolve with the industry. This week, we have added a new principle to explicitly address issues of review and sales manipulation.

I do not attempt to artificially manipulate reviews, downloads, or sales in any way. I understand that the promotional services I hire are an extension of my reputation, so I take the time to verify they use only legal and ethical methods.

Always research services before you hire them. You can often identify questionable services by a combination of too-good-to-be-true promises (such as guaranteeing best seller status) and a refusal to disclose their methods. You have the right to know how a company will operate on your behalf, and any company that refuses to disclose its methods is not to be trusted.

The consequences of unethical shortcuts like clickfarming are severe. They can result in loss of your royalties, a ban from Amazon, a lawsuit, and damage to your reputation and career. Choose your service providers wisely, and always remember that if it seems too good to be true, it likely is.

OVER TO YOU
The clickfarming scandal has given rise to strong, conflicting opinions. Where do you stand on the issue? Let us know in the comments below.