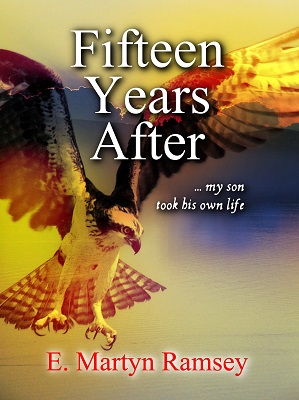 Writing: Why I Write What I Write

While many indie authors have a lifelong compulsion to write, some turn to self-publishing after writing has helped them deal with a traumatic event such as serious illness or bereavement. One example in the latter category is US author E Martin Ramsey (his pen name), who wrote his first book to help him come to terms with losing his young son, but now continues to write in other genres.

My first self-published book, Fifteen Years After, is a niche book in the truest sense. It won’t appeal to the majority of book lovers, but I hope it will appeal well to the niche it serves. You see, Fifteen Years After is the story of my fourteen-year-old son who took his own life fifteen years ago. Don’t be frightened. The book is not ghoulish and speaks to issues which are under-served and which need to be discussed.

Fifteen Years After started out as a therapeutic exercise during the first few years immediately following Joe’s passing. I experienced some life set-backs thereafter which motivated me to write Joe’s story (and mine).

Fifteen Years After is then part memoir and part self-help for those who have experienced a similar loss. The story describes the circumstances surrounding Joe’s passing, and how an otherwise seemingly ordinary family can suddenly be blind-sided by cruel circumstances.

However, the story also describes how I coped as a father during then, as well as fifteen years after. In it, I submit to the reader suggestions based on my actual experience. The message in the final analysis is one of compassion plus hope, faith, and courage so that others might persevere through a parent’s worst nightmare.

I self-published Fifteen Years After through CreateSpace with relative ease, and it’s currently offered on Amazon. I’m also planning to publish on Ingram soon. I’ve just ordered the physical proof.

But the writing hasn't stopped with this book. I’m also in the process of writing another book; though still non-fiction it’s an entirely different genre. The working title is The Colonel and The Vicar. It combines two of my major interests, family genealogy and military history, specifically the American Civil War. I’ve finished a first pass but have a bit further to go before sending it off to the editor, hopefully by December or so. Whereas Fifteen Years After was emotionally difficult to write, The Colonel and The Vicar has been intriguing and, ironically, a therapy all its own!  I also expect the self-publishing sojourn will be a lot easier the next time around.

OVER TO YOU If you'd like to share your story of why you write what you write, please email Debbie Young, blog editor, with an outline of your experience.

E.Martyn Ramsey is a former software engineer and family man living on the north shore of Massachusetts, USA. His hobbies include family genealogy and military history. He also loves sports from youth level to professional, especially ice hockey and both footballs (World and American). “I used to play but now I’m too old in the tooth.” Author website: www.fifteenyearsafter.wordpress.com