Writer: Who Are You? A Guest Post by Dan Holloway.

OK, I’m the first to admit I’m subject to a not insubstantial influence from Ginsberg, 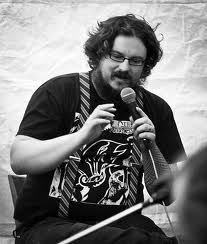 Cassady, Patti Smith and various other parts of late mid twentieth century American countercultur — but this really has nothing to do with navel-gazing, primal screams or the Age of Aquarius. Just like those slightly awkward elements of hippydom, though, this is one of those topics that makes authors shift uneasily in their chair, shuffle and generally look for an exit.

I get why writers resent the question: “What do you stand for?” You can understand it in two ways. First, it sounds like a segue into a discussion of branding and marketing, and both of those are somewhat distasteful topics. And in a way it is about this. In a way.

Second, many of us feel that what we write and who we are are two fundamentally

different things, and asking a writing “what do you stand for?” feels like it’s eroding that essential boundary between the private and the public.

I don’t want to make anyone uncomfortable (ah, well, I think we know that’s a lie – a lot of us *need* to be made to feel uncomfortable, especially when it comes to art. But not in a bad way!) but I want to throw some things out there to go away and think about. I will be talking about all of them in some detail over the coming weeks either here or at my new blog The Cynical Self-publisher. For now, I’ll leave it at concrete suggestions and hinted reasons and hope to get you thinking.

So, who are you? What do you stand for? They’re not just hippy memes. They’re the most important questions you can ask.