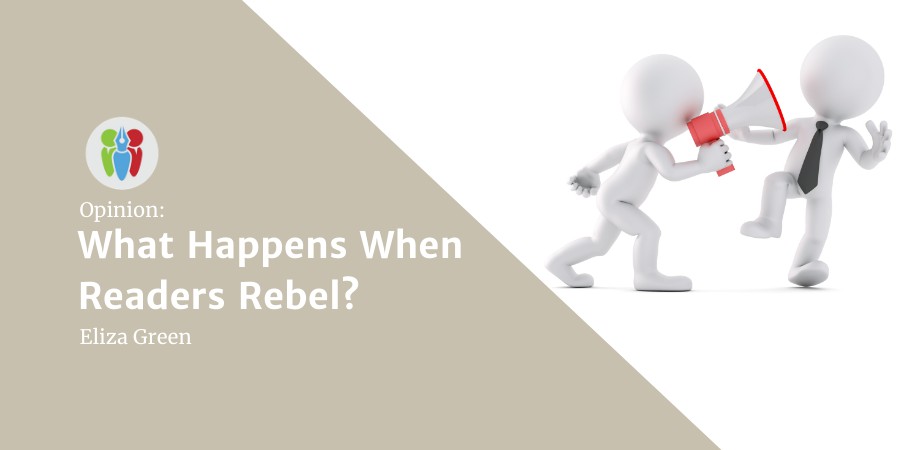 What Happens When Readers Rebel?

A one star review is always difficult to see, but it's also a right of passage. You only have to look at Stephen King or J.K. Rowling's reviews to know that no author gets away with five star reviews forever. The odd one star review is manageable. But what happens when readers rebel? Eliza Green, ALLi author member, looks at the latest Patricia Cornwell novel, Quantum, and the shocking response it received on publication.

I’ve been an author since late 2012, knocking out one or two books a year. In 2019, I changed that approach and wrote an extra four books in a new genre and under a new pen name, making sure I wrote the books to market.

Writing to market and writing in hot new genres is a common tactic used by indie authors. The results have produced some lightening fast series and altered the rollercoaster rules for publishing yet again. Readers are more educated than before and more demanding, especially with the steady release of books that hit the tropes they crave. Readers don’t know why they like something. They just do.

Nothing wrong with that tactic.

Slow and steady also wins the race. Writers releasing one book a year (or longer) also have their legions of fans. Take George RR Martin, for example. His fans wish he would write faster. He doesn’t, but he delivers what they want to read.

So it came as a shock to see a new release from one of my favourite authors was getting slated in reviews. I credit Patricia Cornwell for getting me back into reading after an absence of many years. And boy did I read. I devoured her Scarpetta series. I also grew out of her books. It happens. The later ones weren’t for me, but that’s okay. An established author grows and wants to try new things. Not all fans follow.

Why Did Cornwell's Readers Rebel?

So, why did a respected and successful author’s new release get such scathing reviews?

I delved deeper into the comments and caught several mentions of the book being unfinished. Others slammed the year long wait for part two.

Then there was the price.  Some complained about the $9.99 price tag for an eBook.  I’ve seen that price (and higher) being used on many traditionally published books. But authors still buy their novels.  So why are readers suddenly peeved by a tactic that is still a cash cow for the publishing giants?

The bad reviews didn’t stop there.  Some complained about the overly descriptive passages that slowed the momentum of the book, published under and edited by Amazon’s imprint. Others didn’t like the Kindle in Motion technology that animates parts of the read.

I didn’t read the book, so it would be unfair to comment on her story. But as a reader, three of the listed issues might turn me off: half a book, the price tag and Kindle in Motion. I suffer from motion sickness, so even the simplest 3D images can upset my tummy, despite their nifty swivel action. You have to try these things out, I suppose.

As I skimmed over the reviews, I wondered if readers, once beholden to the strict publishing schedule of traditional houses, were breaking out of the chains imposed on them in the past. New rules have emerged, one where the reader is part of the writing process. Write to market happens because authors pay attention to what their fans want. What they buy and how they review can influence what an author will write next. And while certain genres can still flourish with slow and steady releases, I fear it’s turned some readers into demanding divas. Not even an established author, with notable successes to her name, can escape the wrath of the modern-day reader. They are more educated; they control the flow of books to a point, and can sway the next reader.

They hold all the power.

Well, most of it. We don’t have to write if we so choose.

So why did respected author, Patricia Cornwell get slated? Did Amazon throw her under the proverbial bus in their eagerness to test out their Kindle in Motion and their yearlong preorder? (a new thing in the last month).

Amazon does nothing by accident. Ask any indie author trying to get a peek over their one-hundred-foot wall at their tactics. You can’t ignore the effect demand services like Netflix and Amazon Prime have had on our habits. We have been trained to expect stories faster, and when we want them. I lose patience if I have to watch an advert these days. But to be fair, I was scrolling through that junk back in the days of VHS, so maybe I’m not the best example.

The book world is no different. The more we get, the more we demand things our way.

It’s a catch twenty-two situation, but what has happened in part with Patricia Cornwell’s novel goes against that trend. Book quality aside, higher prices and yearlong preorders just feel like outdated tactics now, and I’m not sure why Amazon chose to go against the trends of what many indie authors wouldn’t do (higher price, splitting a book in two, too long a wait between books). Has Amazon lost sight of customer needs on its own marketplace?

My gut feeling is no. They’re experimenting again and using high profile authors to do it. I don’t know too many indies with their intimate knowledge of the market who would agree to a split story, a high price (well, maybe) and a year’s wait. The strategy seems too risky for that extra publicity; short term gain, but with the potential of losing legions of fans.

Amazon will be no worse for it. I just hope the participating authors can say the same.

Why do you think Patricia Cornwall's latest novel received such a critical response? Have you ever had readers rebel?

How to Get Editorial Reviews for Your Self-Published Book

Writing: How to Deal with Negative Reviews

Eliza Green tried her hand at fashion designing, massage, painting, and even ghost hunting, before finding her love of writing. She often wonders if her desire to change the ending of a particular glittery vampire story steered her in that direction (it did). After earning her degree in marketing, Eliza went on to work in everything but marketing, but swears she uses it in everyday life, or so she tells her bank manager.

Born and raised in Dublin, Ireland, she lives there with her sci-fi loving, evil genius best friend. When not working on her next amazing science fiction adventure, you can find her reading, indulging in new food at an amazing restaurant or simply singing along to something with a half decent beat.