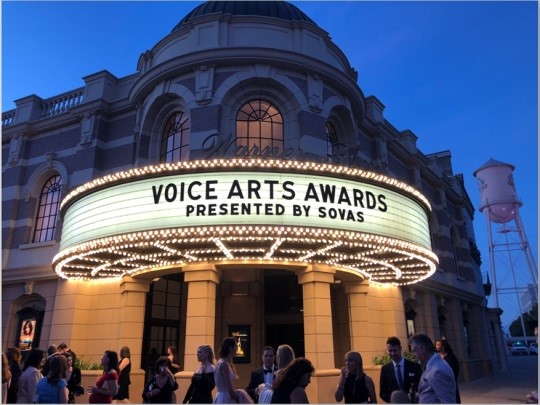 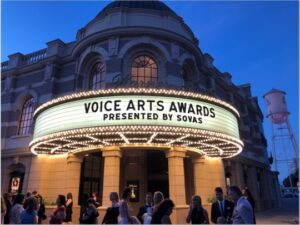 When the self-published audiobook of Brad Borkan and David Hirzel‘s When Your Life Depends Upon It  reached the finals of the prestigious Voice Arts Awards, it shared the billing with top-flight, trade-published authors such as Carl Sagan – a remarkable success story to inspire indie authors everywhere.

Brad's post below demonstrates the care and passion he put into this project, choosing a top narrator and working together with him to make the audiobook the best it could be. Read on to find out how that care and passion paid off.

Recently my audiobook narrator Dennis Kleinman and I had the incredible honor of having the audiobook for When Your Life Depends on It nominated as a finalist in the “Best Audiobook – History” category of the Voice Arts Awards. Here’s how our audiobook came to life, and how it came to be competing for a major prize in Hollywood.

What are the Voice Arts Awards? 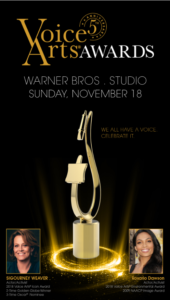 Just as the Grammys are for music and the Oscars are for film, there are the Voice Arts Awards.

Voice Arts celebrate the spoken word for voiceovers in TV commercials, movie trailers, documentaries and animated films like the recently released Incredibles 2.  There are also Voice Arts Awards for audiobooks in a variety of genres.

Our Indie Contender – and What It Was Up Against

To give you an idea of the competition in our category, the four other books that were short-listed included:

All were New York Times bestsellers, produced by big-name publishers, and each had been reviewed in the popular press (e.g.Time Magazine) and had hundreds of Amazon reviews. 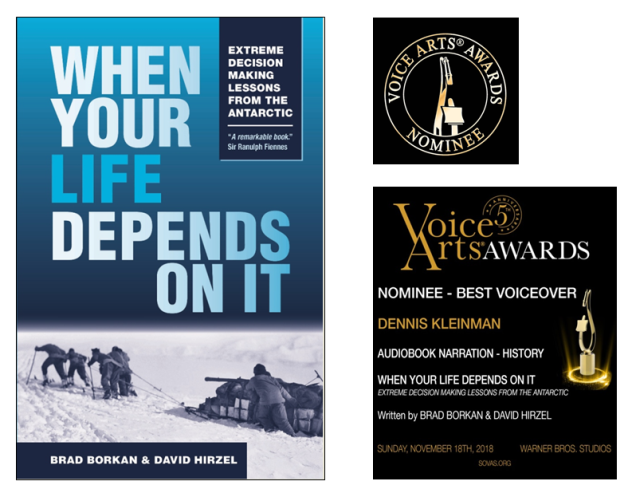 The nominee was my audiobook narrator, Dennis Kleinman, for his narration of the book I co-authored with David Hirzel. Dennis Kleinman is an incredible voice actor. He is South African and has lived in LA for the past 20 years.  His voice is deeply resonant. He is also a great person to work with.

The Importance of the Right Narrator

I decided an audiobook was critical in the evolution of my book after attending a talk at the London Book Fair.  The speaker said that, almost without exception, every successful self-published author had audiobooks.

I tried recording my own voice. I learned a quick lesson.

Just because you wrote the book, does not mean you can narrate it well yourself.

Reading text into a microphone takes tremendous skill – some of which you might be born with, but most of which you have to learn – how to control your breathing, pacing, etc. It also requires a high quality sound studio which can be quite expensive to rent.

Knowing I needed a voice actor, I started by thinking “What would the early Antarctic explorers have sounded like?” These were men who risked their lives for science, discovery and exploration in the most hostile environment on the planet. 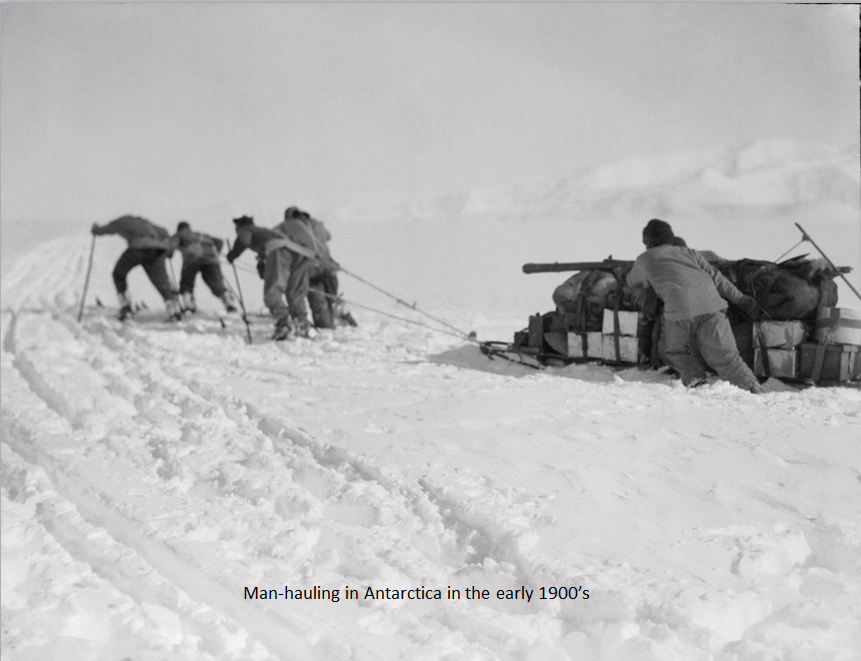 I decided the voice needed to be male, with deep, rich intonation, and a British/International accent. After all, the early explorers came from Britain, Ireland, Australia and Norway. 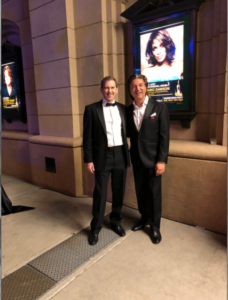 I listened to hundreds of audition recordings from voice actors, and I found I kept coming back to Dennis.

Upon making contact, Dennis kindly recorded the opening five paragraphs of the book – a true story about three men on the ice, one of whom is dying of scurvy and  who asks his companions to leave him behind on the ice to die. As soon as I heard his recording, I instantly knew I had found the right voice.

Dennis and I worked tirelessly to get the appropriate tonality for the book. The early Antarctic explorers faced risks, adversity, starvation, and sometimes death, with nobility and a great sense of purpose. Yet how do you convey that effectively in an audiobook?  Dennis absolutely nailed it.

As soon as the audiobook was completed, Dennis suggested that he re-record the opening segment about the three men on the ice because having now finished recording the whole book, he knew exactly how to make that opening segment especially compelling.  That is what we submitted to the Society of Voice Arts and Sciences (SOVAS) for our award entry. We were incredibly pleased to find that Dennis was shortlisted from the hundreds of entries in our category. 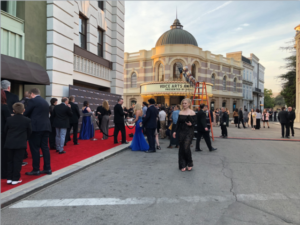 The Voice Arts Awards ceremony promised to be a star-studded, red-carpet, gala event featuring Sigourney Weaver, Rosario Dawson and Van Jones, and was taking place at Warner Bros Studios in Hollywood. All my UK author friends encouraged me to attend.

The event was absolutely amazing – complete with a real red carpet. It took place in the main theatre within the Warner Bros Studio lot in Burbank California. It started with an outdoor cocktail party which gave a great opportunity to meet all the wonderfully talented voice actors up for awards.

At 6pm we were invited inside the theatre. Just like at the Grammys or Oscars, a celebrity would read the nominations for a category, and the envelope would be opened.The winner would come up on stage to make an acceptance speech.

Two-thirds of the way through the evening, our category came up.

When Dennis’ name was read, he received a great cheer from the audience as he is well known in the voiceover community.

While we didn’t expect to win going in, given how pro-environment the celebrities speeches were, I have to confess to getting my hopes up that a book about Antarctica could win.

Sadly it was not be, but just being on the same slide as Carl Sagan’s book Cosmos, which did win our category, is a dream come true for a self-published author. 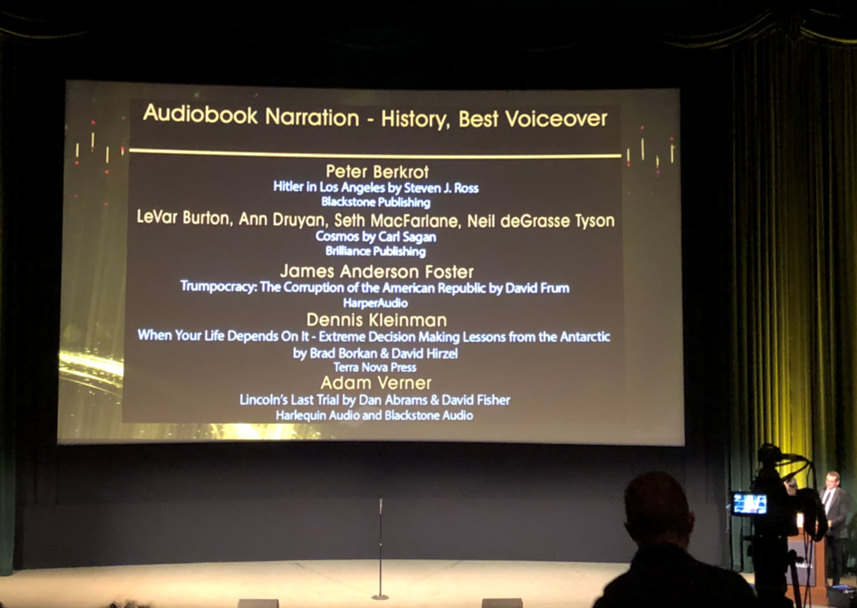 It was a great honor to be there and wonderful to meet Dennis in person.  He has now become a life-long friend. It was also an opportunity to cavort with celebrities like Gwendoline Yeo who starred in Desperate Housewives.

All Credit to Voice Actors 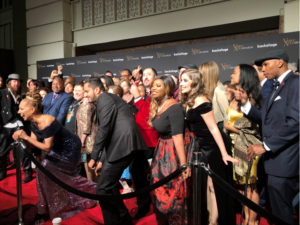 And best of all was meeting all the great voice actors. They are all passionate, inspired, and friendly. Similar in actuality to the many people I know in the Antarctic community and in the indie author community. Great people who love what they do.

Thanks to Dennis and the Voice Arts community, it was definitely one of the top ten evenings of my life.

Brad Borkan has also made a brief video about the experience, which you can view on YouTube here.

Indie author Brad Borkan of @PolarDecisions describes his experience of having his #audiobook shortlisted for the prestigious @VoiceArtsAward. #publishingopenup Click To Tweet

Brad Borkan is the co-author of “When Your Life Depends on It”, which focuses on the real life-and-death decisions made by the early Antarctic explorers. His book has been endorsed by Sir Ranulph Fiennes, the world’s greatest living Polar explorer.

Brad’s interest in polar history started when he picked up an Antarctic book at the age of 8, at the local public library. His life-long fascination with how people and businesses can make better decisions led to a graduate degree in Decision Sciences from the University of Pennsylvania.

He has presented at Antarctic conferences in Norway, Ireland and the UK, and appeared on cable TV in the US, and on Internet talk radio programs. He also speaks at corporate events and business conferences – most recently to 370 people at Credit Suisse Investment Bank – on the themes of leadership, team work, and winning against the odds, all set in the exciting context of Polar exploration.

Earlier this year Brad was named as a Fellow of the Royal Geographic Society.

Find out more about his book at www.extreme-decisions.com.