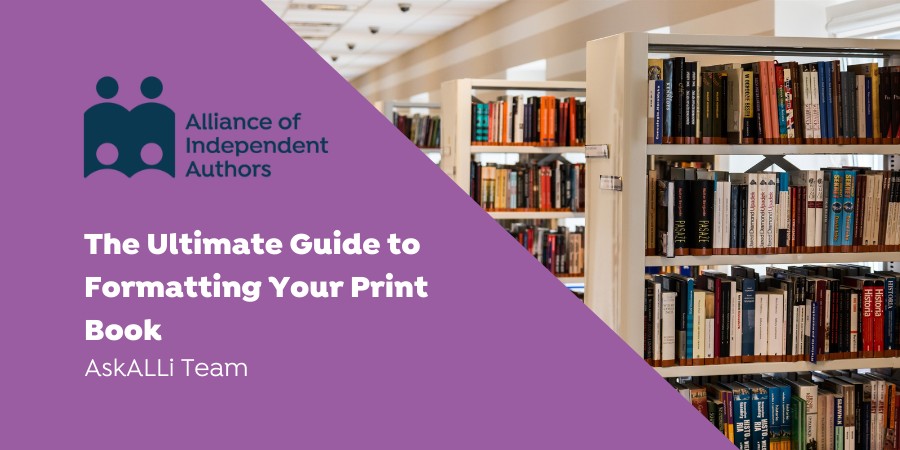 The Ultimate Guide to Formatting Your Print Book

The book is done. Hurrah. You've finished a draft, even had it edited. Now you need to format it and get the thing printed. But how? The Alliance of Independent Authors is pleased to welcome Dave Chesson, creator of Kindlepreneur and Atticus to explain how you can format your book for print. This is the ultimate guide to formatting your print book. 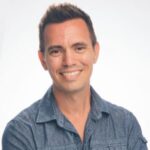 Dave Chesson is the creator of Kindlepreneur.com, a website devoted to teaching advanced book Marketing which even Amazon KDP acknowledged as one of the best by telling users to “Gain insight from Kindlepreneur on how you can optimize marketing for your books.” Having worked with such authors as Orson Scott Card, Ted Dekker and more, his tactics help both Fiction and Nonfiction authors of all levels get their books discovered by the right readers.

Book formatting is one of those areas that doesn’t feel like it should be so complicated, but can be a major stumbling block for many authors. This is especially true of print formatting.

Ebook formatting is relatively simple, you don't have to worry about things like margins, fonts, etc. because these are all taken care of automatically by the ereader. Print formatting, on the other hand, requires far more from the formatter, and it can be tricky to get it right, especially if you don't have the right tools.

This article will outline some of my favorite tools that you can use to format your print books, as well as all of the different elements and best practices that you want for print books.

So, let's get started.

The Tools I Recommend 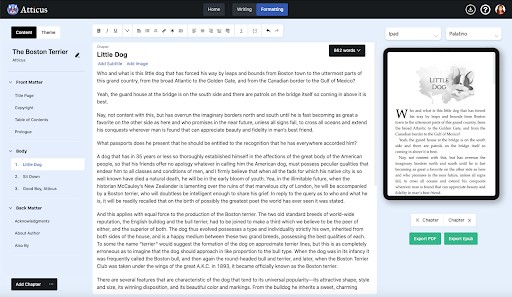 As the developer of Atticus, a tool I created as the ultimate formatting solution for all authors, I am naturally going to recommend it as your primary formatting software.

It is cheaper than the leading alternative, and works on virtually all platforms, including Mac, Windows, Chromebook, and Linux.

Most of the screenshots I use in this article are also taken from Atticus.

That said, if you use Microsoft Word, or an open source alternative such as LibreOffice, then much of this information will be valuable to you as well. And if you're looking for templates to get you started, we just rolled out a free tool to give you Word-compatible templates in a variety of trim sizes, perfect for formatting your book if you are on a budget.

Now on to the recommendations for formatting your paperback book.

Here is a list of all the best practices to get right when formatting your print book.

Some of the many trim sizes available in Atticus.

The first decision that you'll need to make when formatting your print book is the trim size.

The trim size is the height and width of your book. There are various sizes for various situations, and the one you use will depend on your needs. Here are some general rules of thumb:

Margins are another important element to consider in formatting your paperback book. Amazon has a minimum requirement of a 0.25 inch margin around the outside of your book.

However, don't forget about your gutter margin. The gutter margin is the portion of your book that will face on the inside, and it needs to be slightly larger than the outside margin. This can be set up in Word, or is generated automatically in Atticus.

Additionally, you want to configure your paragraph layout. This will depend on the genre. Fiction, for example, uses a simple indent for all of its paragraphs (not too large), whereas nonfiction often separates its paragraphs with a small space, much as you would see in a web article.

You also want to consider the font that you use in your book, choosing something that matches the genre, but is not too overpowering.

Also you want to make sure that you have the rights to use that font commercially. Atticus makes this easy, by only offering fonts that you can legally use. If you are using Microsoft Word, you will need to do your research.

Page numbers, headers, and footers can all be configured in Microsoft Word, or added automatically in Atticus.

The only thing you need to pay attention to here is that the headers and footers do not overpower the layout and stay within the margins that you have specified.

The headers are a good place to add your book title, your author name, or even the chapter title if needed. 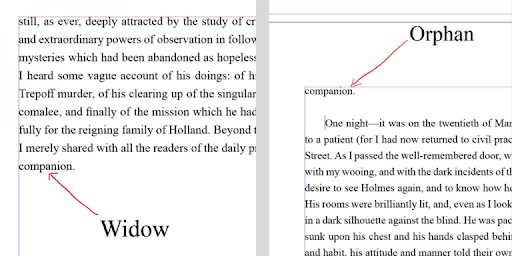 Widows and orphans are single words at the end of the paragraph that can sometimes become isolated from the rest. You can make slight adjustments to your formatting of those specific paragraphs to help them look cleaner and professional.

At the end of every chapter, you need to make sure you are using page breaks instead of simple paragraph breaks. This will allow the next chapter to always begin on the following page. As with many of these instructions, this feature is handled automatically in Atticus. 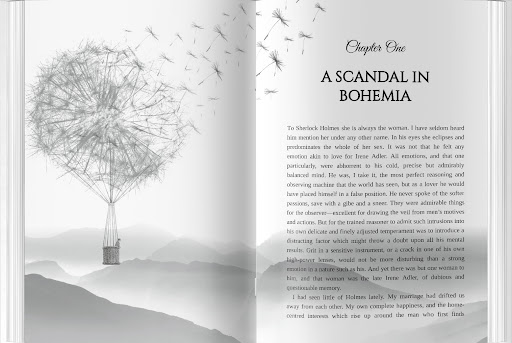 A chapter header design is one way to really stand out above the competition in your formatting.

You can add images, distinct fonts, and more, but this level of formatting is advanced if you're using Microsoft Word. That is why I recommend my free formatting templates if you are using Word, at least as a place to start.

If you're using Atticus, your options are greatly expanded. With Atticus, you can even create full-bleed backgrounds that take up the entire two-page spread of your chapter theme.

Without question, the only file format that you need to worry about when formatting for print is a PDF. This is the format accepted by KDP Print, as well as IngramSpark. While you can absolutely use Microsoft Word to create your files, they will ultimately need to be converted into an Adobe PDF.

A Word of Advice

The biggest pitfall that I see when authors format their own books is that they don't spend enough time to proof it.

There are a lot of little things to watch out for, such as the widows and orphans, that take a careful eye. You literally need to go through every single page (preferably in the finished PDF format) to check for errors like these. Because of this complexity, a lot of authors will choose to hire out the formatting, but there is an easier solution.

A program like Atticus will take care of 99% of these formatting issues for you, and it does so with the click of a few buttons. With Atticus you can easily take care of your trim size, your font, your page numbers, and design elaborate chapter themes without spending much time at all.

This is why I recommend Atticus for most authors. But if, for whatever reason, Atticus is not right for you, then check out the formatting templates that we've built, all of which are available for free.

There are a range of common tools in use by ALLi members, including Vellum, templates from Dave above, from Draft2Digital and Reedsy. In addition, ALLi MEMBERS have access to our annual partner directory as well as the approved partner list. ALLi's watchdog vets all partner members before they're accepted onto our trusted provider listing. So if you would like to find and use a trusted formatting partner, then you can do so by becoming a member, logging into the member website and navigating to APPROVED SERVICES > SEARCH FOR A SERVICE.

How Do ALLi Members Format for Print? 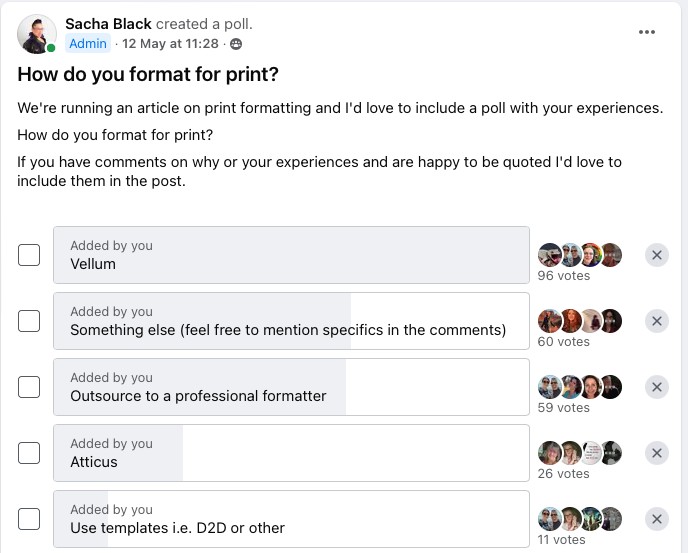 Currently, the most common way to format by ALLi members is via Vellum. The second most popular poll result was “something else”. Of that something else, the two most popular softwares mentioned in the comments were Microsoft Word and InDesign.

But other options not mentioned include:

“I use InDesign, and like Matt Be, also create ePubs using the typeset pages as a starting point. The reason is because I have 100% control over how my books are presented and designed, both in print and in eBook. I can include custom design elements, and by using HTML to create my ePubs, I can also use styles to force eReaders to present certain elements in a certain way, for example, using different fonts to differentiate between parts of text.”

“I typeset books in Indesign (commenting as a professional designer but also when I was part of an anthology and now as I start the editorial process of a book of my own OMG..!). It's simply the right fit for anyone who values good typography and superior handing of design. I also use Affinity Publisher sometimes and rate that too as a cost-effective alternative, the only reason I haven't made the full switch is that my publisher clients like me to work and archive in Indesign. I've look at Atticus and Vellum as its good to see other options and I can be informed for my business but it's still Indesign for me! I also format eBooks in Indesign too.”

“I start with a WORD template I purchased from Joel Friedlander and then modified over the years. That generates a master for eBook and Print. I then convert it to PDF and do the final touches in Adobe Acrobat. (I also had experience using Adobe InDesign when running a Print/POD business, so I'm familiar and comfortable with those tools)”

“I've always used Libre Office to format for print, and it's served me well. But I've bought Affinity Publisher last year and have already started formatting for my digital pdf versions, and I really enjoy learning to work with it. So, next step will be creating my paperbacks with it, too.”

“I love Vellum, particularly now with the newer features such as decorative pages.”

“I format in word – I have a Mac but I found it fairly straightforward and if you don't have the extra cash for programs I think it's a great option.”

“I used to use LibreOffice writer (I made my own templates and was going to start selling them along with a guidebook!) but shifted to Atticus. It's still rather buggy but I like the idea of one master copy, with ebook and print coming from the same source, rather than having to maintain two files.”