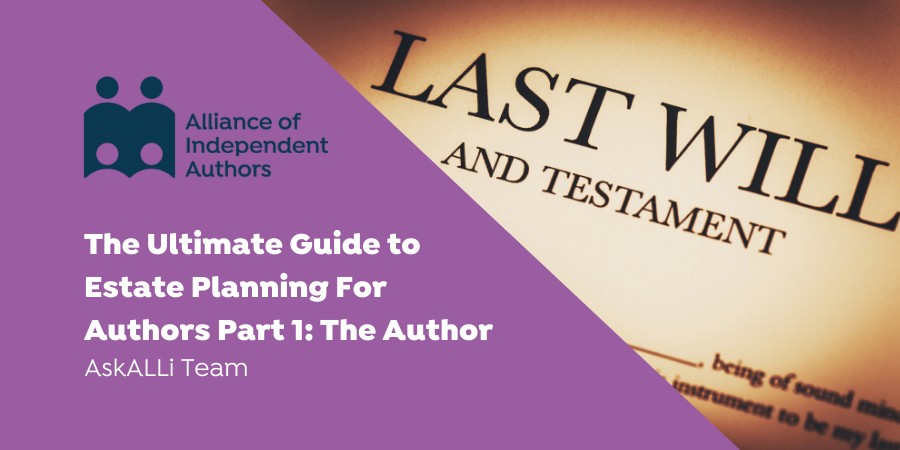 The Ultimate Guide to Estate Planning For Authors Part 1: The Author

Thinking about one's death is a difficult topic at the best of times. But it's something that eventually, we all have to face. When you're an author, and you have intellectual property, having a will is even more important to ensure your IP rights are inherited by your rightful heirs. Today, the Alliance of Independent Authors discusses estate planning for authors. 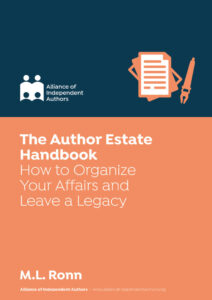 The Author Estate Handbook: How to Organize Your Affairs and Leave a Legacy. The second is angled more for the heirs you leave your estate to and is called The Author Heir Handbook: How to Manage an Author Estate and Look After a Legacy. Both were written by ML Ronn. Today, we're focusing on authors, and the first book. If you would like to learn more about how to get your affairs in order, understand estate planning basics, or make a plan. This book will help.

If you're an ALLi member, you can download the short guide for free by navigating to our member website and logging in. From there, you need to navigate to PUBLICATIONS > SHORT GUIDES and you'll find both short guides.

Estate Planning for Authors: What is a Will and Testament?

A will is a written legal document that outlines how your property and money will be distributed after your death. A will names an executor who will manage your estate.

By law, you're not required to have a will, but you should strongly consider it. Wills prevent common scenarios that can cause problems after you die, such as who gets what, what happens if you die simultaneously with your spouse, and the legal guardianship of minor children, just to name a few.

Should you have a will? It depends on your situation, but you probably should. If you don’t, you will definitely want an attorney’s advice—dying intestate without proper planning can be a costly mistake. Probate can be very expensive.

I can't tell you what should be in your will, other than that it should be drafted by a licensed attorney who specializes in wills and trusts in your area. Wills are not cheap to create, but the money you’ll spend on the will is a pittance compared to the money your heirs will have to spend in probate court. There are online services and do-it-yourself-will software, but I strongly discourage you from using them. They're not designed for authors, and the chances are too high that you will make a mistake or that the will won’t cover everything it should. No matter what country you live in, estate law is complex.

I always recommend a licensed, skilled attorney when making a will. DIY wills might be fine for regular people, but you own copyrights, which means you're not a regular person.

Let’s talk about probate because the term is often used when discussing wills, and it carries a lot of negative baggage. Probate is the validation of a will by a court. It is also the court-supervised division of a person’s assets. Probate exists to close estates in an orderly manner and protect creditors.

When you die, for legal purposes, you will die one of two ways: with a will (called dying “testate”) or without a will (dying “intestate”). If you die without a will, a court determines how your assets will be distributed depending on the laws in your state, province, or territory. We can both agree that letting a court decide the terms of your estate is a terrible idea.

With a valid will, you get to choose how your property is divided. That is one of the most important reasons to make a will.

Why Should You Even Bother? A Helpful Analogy

It's useful to think of your author business as an ecosystem. An ecosystem has many elements, and each one plays a special part. If one element is disabled, it impacts other parts. If enough parts are damaged, the entire ecosystem collapses.

A good rule of thumb is that every element of your author business is connected to at least one other. This may not be immediately obvious to your heirs, so we have to help them understand the connections. 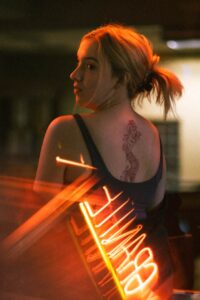 Photo by Jordan on Unsplash

An Author Who Died Without a Will: Stieg Larsson

Stieg Larsson was a prominent Swedish journalist and author of the Millennium crime series. He died suddenly of a heart attack in 2004. His books, published posthumously, were hits, and in death, he is still one of the most successful bestselling authors in the world. What you may not know about Larsson is that he died without a will. Larsson’s story is a cautionary tale of what can happen if you don’t make a will.

As a journalist, Larsson wrote pieces that railed against the Far Right in his country, a position that placed him in constant danger. Larsson lived with his longtime partner, but they did not marry because Swedish law dictated that married couples had to disclose their address to the public. Doing so could have endangered Larsson’s life.

After Larsson’s death, it was discovered that he did not leave a valid will. His family found a 1977 will that left all his work to the Swedish Socialist Party, but it was determined to be invalid because it was not signed in the presence of witnesses (another good example of why you should always hire an attorney). As a result, Larsson’s copyrights went to his father and brother rather than his partner. Larsson reportedly did not have a good relationship with his father. He may not have even known that he had a brother.

Since Larsson was not married, his partner had no rights to his property, even though passing the copyrights to her may have been what he would have wanted. What would he have wanted? Since he didn’t leave a will, we’ll never know. There have been claims that Larsson’s father and brother have done things with the copyrights that Larsson would never have approved of, and that run contrary to the spirit of his work. His father, brother, and partner have been in a bitter feud since his death.

Despite the massive cash flow his books created, Larsson’s legacy isn’t what it could have been. Larsson could have prevented all of this by drafting a will that left his estate and copyrights to his partner. However, just having a will is not enough.

An Author Who Died Without a Properly Drafted Will: Michael Crichton

At the time of his death in 2008, Michael Crichton was one of the bestselling authors in the world (and still is). His works such as Jurassic Park and Westworld were intensely popular and still endure today.

Crichton was married five times. When he died from cancer, his fifth wife was pregnant with his unborn child. Crichton had a will, but he never got around to updating it. Because of that, he disinherited his unborn child because he didn't update his will before the baby was born. The will had a provision that disinherited anyone making a claim who was not listed in the will.

A bitter legal battle ensued between Crichton's 20-year-old daughter and his fifth wife. His wife filed a lawsuit to have the court grant part of Crichton's estate to his son under a loophole in California law. She was ultimately successful, but it cost a lot of money and stress that would have been avoided if Crichton had simply updated his will in the first place. Crichton’s story illustrates that having a will is not enough. It needs to reflect your wishes correctly and it needs to be current.

If Stieg Larsson's and Michael Crichton's stories scare you, there's good news. If you don't have a will, you can start one today by calling an estate attorney for a consultation. If you have a will but it's not up-to-date, call your attorney. You can probably get your will updated within a week. However, it’s not enough to keep your will current. There’s another pitfall to discuss.

The Silver Bullets of Doom

There are several elements of your estate that if you get wrong, no amount of effort in the world will help your heirs. In fact, they won't be able to do virtually anything with your estate. These elements are that important. If you successfully plan for them, you will be light-years ahead of other authors.

These dangerous elements are called “The Silver Bullets of Doom,” and they are:

Why do I call them the Silver Bullets of Doom?

A “silver bullet” is used to describe something that succeeds instantly, usually in the context of werewolves. It is used in the positive sense, but here, we're using it in the negative sense; if a Silver Bullet of Doom makes contact with your author estate, it will dismantle it instantly. A blow from any one of these bullets is instant death. Each one of these Silver Bullets of Doom requires a system and process to ensure that your heirs have access to the relevant data and understand the processes by which to utilize your intellectual property. You can find a more detailed breakdown of how to establish systems and processes for these bullets in the book.

Life insurance is money that goes to your heirs after your death. You pay a premium and as long as your premium is paid and you don’t violate any conditions of your policy, the company will send your family a check for the policy limits. Life insurance can be expensive, but it’s worth it.

This should be an obvious tip, but you need safe places for all of your estate planning documents. I recommend at least one safe place in your home and one outside your home in case your home burns down or is destroyed. Inside your home, I recommend a high-quality fire-resistant safe. They're frequently marketed as “fireproof safes,” but just do a YouTube search to see how fireproof they are. Your goal is to buy a high-quality fire-resistant safe.

Estate planning is one of those “I'll deal with it when I'm older” topics that many of us push aside or save for another day. Unfortunately, the one thing we can never know is when our time is up. Creatives spend their entire lives building a body of work, a legacy that should be left to their heirs, and just a little bit of preparation and forethought can ensure that they do inherit that legacy.

ALLi members, don't forget to download your copy of the short guide using the links and instructions at the top of the post.