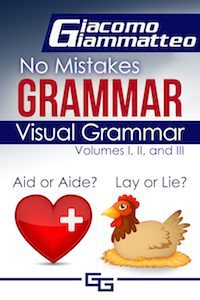 Writing: Where Spellcheckers Fall Short – and Why You Need an Editor

Jim Giammatteo, indie author of over 70 books, puts spellcheckers and grammar checkers in their place

While there's no doubt that spellcheckers have improved over the years, they are still no substitute for a human editor, no matter how tight an indie author's budget. Jim Giammatteo explains why we should resist the temptation to use them as a substitute – though they have their uses.

I'm writing this hoping it will inspire people to reconsider their decisions if they had elected to forego an editor in favour of a spellchecker. Why? It's a bad idea.

Don't get me wrong; I love spellcheckers. I think they're great and getting better. But that last statement says it all: getting better. In other words, they're not there yet.

They miss mistakes and point out things as being wrong that aren't. You can't trust them. Some of the worst mistakes pop up due to the misuse of words—especially homonyms—and spellcheckers won't find them.

Without further ado, let's take a look at what these applications will and won't do for you.

The Good and the Bad

Spellcheckers are outstanding at scanning a vast amount of text and listing words that are spelled wrong. Most of them even provide a list of suggestions for the proper word, allowing you to simply click on the word to replace the wrong one.

As an example, take the word “barcode.” If you check Merriam-Webster, you'll see it listed as “bar code” (two words), with “barcode” as a variant. The Oxford English Dictionaries lists it as one word, as does Dictionary.com, but vocabulary.com lists it as two words.

That's four dictionaries with two of them showing “barcode” as one word, and two showing “bar code” as two words.

Another problem with spellcheckers is when rules change, as in the case with “themself.” Prior to last year, the use of themself was frowned upon, and it is almost always flagged by spellcheckers as being wrong. But CMOS (Chicago Manual of Style) says it is now all right.

At the Copy Editors' annual meeting, the Chicago Manual of Style editors touched on the use of themself in their conference presentation, saying the 17th edition is going to say it’s OK to use the word themself if that’s your preference.

It used to be that in a sentence like the following one, the proper word to use would be themselves even though it was referring to a singular pronoun.

Now, according to CMOS, it's okay to say:

This took place more than a year ago, yet the spellcheckers still flag themself as inappropriate. It did it with this piece of writing when I ran it through spellcheck.

The examples above don't constitute the extent of the problem. Spellcheckers consistently flag the word “else's” as being wrong as in the following sentence.

Not all spellcheckers will flag it, but some will highlight the word “else's” and flag it as not being standard spelling.

Aside from the few issues we've already touched on, the big issue is dealing with homonyms. I know that most writers will claim they know the difference between words and when to use each, and I don't doubt that. The problem is no matter how well versed you may be in grammar, the occasional slip will happen. If you're typing fast, its easier then you think to mess up and type “it's” instead of “its” or “than” instead of “then.”

The big problem is that when you make an error like that, the spellchecker won't flag it because they're real words, just not used properly.

(I will assume you noticed I slipped in two of those very mistakes in the previous paragraph, and when I ran the spellchecker it said all was fine. “… its easier then you …” should have read “… it's easier than you…”)

No problem, you say. I”ll use a grammar checker. To check that out, I ran that paragraph through Grammarly. Here are the results:

The problem is no matter how well versed you may be in grammar, the occasional slip will happen.

ProWritingAid, a competitor to Grammarly, found both of the errors and did not point out any other problems.

Other homonyms that many people have problems with are the following: 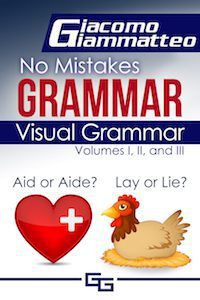 One of Jim Giammatteo's extensive “No Mistakes” series

There are hundreds more, but we don't have time to list them all. I cover most of them in my book Visual Grammar, or you can opt to check out any specific words in one of the No Mistakes Grammar Bites books. You can see all my books here or go to any of the major retailers online and search by author name or book title.

Spellcheck doesn't catch a lot of capitalization errors, and it usually flags acronyms, abbreviations, and technical terms as being spelled wrong. You can fix that by entering them in the spellchecker's dictionary by clicking “learn” or “add to dictionary,” but it's something you'll have to do manually.

Spellcheck also fails in those instances when you forget to pluralize a word. Suppose you meant to say “The bananas are on the counter,” but you forgot the “s” after “banana.” Now, the sentence not only carries a different message, it is also grammatically wrong because of the subject/verb agreement. “The banana are on the counter.”

A spellchecker wouldn't pick up on that. I ran it through both grammar checkers, and they both caught the error, but the spellcheckers didn't.

This is From the Grammar Advice Blog:

That's a great sentence, and it shows how bad a spellchecker can perform, but nothing shows failure better than the oft-cited poem, “Ode to the Spell Checker“.

In summary, spellcheckers are great at what they do for the most part, but they're not something you can rely on to catch all of your mistakes.

#Indieauthors - don't think a spellchecker can replace a human editor! @JimGiammatteo explains why that would be a false economy. #ww #writingadvice Click To Tweet

Writing: Putting the Fun into Punctuation