In this week's Self-Publishing News, ALLi News Editor Dan Holloway fills us in on the latest with libraries sending readers messages blaming publishers for not being able to lend books and Amazon seemingly ignoring ts own rules.

There is only one bookish thing on my mind this week, and the minds of almost everyone I know. His Dark Materials, Philip Pullman’s masterpiece, has made it to the small screen at last as a series. It’s strange to think this would have been unthinkable not more than a decade ago. The rise of the series is one of the biggest positives of recent years, truly allowing books to breathe the way films never can. 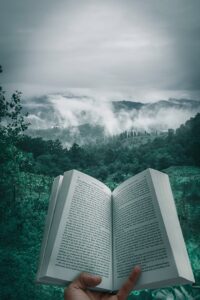 Photo by Kourosh Qaffari on Unsplash

We have talked about libraries a lot the past few months. And I want to talk about them again today. Indeed, I want to talk about the publisher and libraries dispute. But first I wanted to share a story about one of the more controversial libraries. The Open Library is part of the Internet Archive. It has come in for a lot of criticism. This largely centres on its scanning of books to create a digital copy which it then lends out, often without the author’s consent. The flipside is that, through the Internet Archive, the Open Library and Wayback Machine are now providing an invaluable resource for researchers. Wikipedia citations are able to link to passages quoted from books or articles, even where the book is unavailable elsewhere or the article is no longer online. This means anyone using Wikipedia can verify citations for themselves.

Back, though, to the libraries and publishers dispute. This week MacMillan, the first publisher to impose an embargo on lending of ebooks, has responded with their side of the story. John Sargent claims he is not trying to hurt libraries. The key part of his open letter states “I know that you pay us for these e-books, but to the reader, they are free.” That, it is fair to say, has not gone down well. Among other things, libraries have responded with some very matter of fact messages to readers attempting to borrow ebooks with long waiting times. In short “sorry you can’t read this now, the publisher won’t let you.” And so the drama continues.

Publishers’ Weekly is to start offering paid reviews to indies in Book Life. Book Life is its self-publishing-focused magazine, and offers the (very long shot) option of a review for free. If you don’t mind waiting you can now guarantee yourself a review for around £300. I am not, shall I say, brimming with excitement.

Does Amazon Care About Its Metadata Rules?

Ever since Kindle books appeared, authors have been using metadata to get visibility. And one of the most valuable ways of doing that is a book’s title. I remember at one point in 2011-12 authors would find a way of writing title to maximise visibility and spread the word, and Amazon would have a new rule in place to stop it within days. Then we’d try something else. And so on. One thing was always clear, though. While most indies would have our books delisted or rejected for infringements, many traditional publishers wouldn’t.

It seems the only thing that’s changed is there’s a lot more bad blood on both sides. Authors have years of experience of delisting and reviews disappearing. Amazon, on the other hand, have experienced scandals around system gaming. But a story this week shows just how widespread abuse of the rules still is. Of the 100 top paid Kindle titles, no fewer than 70, across indie and traditional publisher alike – including Amazon imprints, used tactics outlawed in Amazon’s terms and conditions. Which makes you wonder why they bother with rules at all.

The week in Audio

We’ve talked about audio platform Findaway a fair bit recently. And their expansion continues with the addition of a group of local platforms. Findaway are definitely shaping up to become a serious alternative platform for people wanting to avoid Audible. And their key selling point aside from “not Amazon” is not demanding exclusivity.

Amazon seems to be ignoring its own rules about titles & other top #selfpub news stories for #indieauthors, in one quick read, by #ALLi News Editor Dan Holloway @agnieszkasshoes #digitaleconomy #publishingopenup Click To Tweet

Do you feel there's a level playing field when it comes to Amazon's rules? Let us know in the comments below.