Self-publishing News: What Strategy for Amazon?

In this week's Self-Publishing News, ALLi News Editor Dan Holloway fills us in on the latest with a look at Amazon Ignite, and different approaches to the global market.

Next week's Futurebook will be asking the question of how we can make the most of live events. It's a question we've been asking for the decade and more I've been self-publishing which always surprises me. Last Friday I spent the evening playing games with the public as part of the Being Human. I sold a healthy amount. The key is engagement. Do something interesting *with* people and they will be a willing part of it. 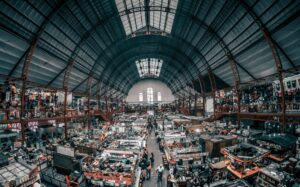 Photo by Jezael Melgoza on Unsplash

Anniversaries are always noteworthy but this week saw a very interesting one indeed. It marked 5 years since Amazon opened a new Kindle store. That’s a quite astonishing figure. All the more so for a company known for its ambitions on taking over the world. Is this a significant shift in Amazon’s focus away from ebooks? Certainly, print (bookstores, KDP print) and obviously audio have featured more prominently in Amazon news of late.

Amazon also seem to be focusing increasingly on logistics, with acquisitions like Wholefoods. ALLi author Helena Halme sent this fascinating story from the Scandinavian press. In short, Amazon are looking to move into the Scandinavian markets, possibly in a big way. They have just acquired a large depot in Denmark and signed a deal with a Swedish courier.

Meanwhile, Swedish company Storytel represents the other extreme. The digital subscription service, like StreetLib, has set out its stall as the globally local digital platform. The emphasis is on opening as many local stores as possible. Its latest launch, in South Korea, means it has 19 markets and 20 territories covered. And it looks set to hit 1.1 million subscribers by year end. On the subject of international markets, this is a great story on the way self-publishing is providing a market for Tamil writers.

And an interesting reflection on the international numbers for Amazon. This week Alibaba netted $1bn in just over a minute, and it regularly racks up 3 times Amazon's haul. Mark Williams asks what this could mean if they went all-in on the Chinese book market.

Who Owns the Rights to an Algorithm's Creations?

Artificial intelligence isn’t going away. But given that its here, what exactly is it doing? We know that platforms like Publishdrive are using it for marketing fine-tuning. And Wattpad are using it to help with editorial decisions. But increasingly we are seeing AI enter the creative sphere itself. Today in Oxford our most prestigious music venue hosts Calculus of the Nervous System, a composition composed by an AI. Admittedly under the tutelage of musician Robert Laidlow.

And this is where we need to sit up. Because at some point the question of rights will get real. Specifically the ownership of rights in works where artists and artificial intelligences have collaborated. The issue is so complex that the US Patent and Trademark Office wants your feedback. They have issued a consultation to see whether people think algorithms, or those who wrote them, should have rights in what results from their use.

Educational publishing is at the edge of a lot of debates in the literary world, from piracy to subscription. Even Audible Captions started as a technology driven by education’s accessibility needs. Next week’s Futurebook Live will have several panels on the subject. But we rarely think about the potential of the educational market as indies. A new Amazon platform offers some very interesting possibilities. Amazon Ignite, at present only available in the US, allows teachers to upload and sell digital educational materials for K-12. These can be in a number of different formats. Think lesson plans, worksheets, factsheets, exercise books.

We talk a lot about subscription services. They are increasingly the way people consume their literature as much as their music and their film. As indies we have tended to rely on platforms from Storytel to Wattpad, Scribd to Medium, and of course Kindle Unlimited if we wanted a piece of this pie. This at a time when we are seeing an increasing emphasis on direct selling on the one hand. And on the other we see more and more publishers, especially indies, doing very well with niche subscriptions. Just yesterday highly successful UK indie Bluemoose launched a subscription for next year’s project of publishing only women over 45. And last week the pioneer of subscription publishing, Peirene, launched an Etsy store.

This week sees a major step towards making it easier for us as indies to get involved in the direct subscription business. Wordpess has just made it a whole lot easier to set up repeat payments. The feature is available on all its paid .com programmes, as well as through its .org software.

How do you feel about an algorithm owning the rights to the work it generates? Let us know in the comments below.