OK, I couldn't not use that as my title this week, could I?! And if you don't know what I mean, let me explain, slowly and calmly. This week saw the announcement of the 2016 winner of the Nobel Prize for Literature. And the winner was Bob Dylan. Nobel Prize. Bob Dylan. Yes! These are hugely exciting times as literature strains at the seams playing and experimenting with its very essence – come on indies, it's time to join the party! 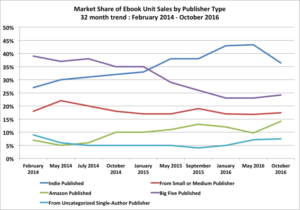 There are some rare instances of graphs that are as famous as works of art. Malthus' J-curve. Climate change's hockey stick. I wonder if this one will join the list. October's Author Earnings report makes strange, potentially grim, reading for indies. The headline figure is simple – by unit sales, value of sales, or earnings, indies have seen, for the first time, a big downtick 9announced the day before The Bookseller published interim survey results showing people thought indie market share of ebooks would continue to grow strongly). There are lots of things to hedge this round with of course, not least of which is that this is just Amazon US. But the growth of Amazon imprints has been noted, and it will make for fascinating trend-watching in the months to come.

New for Self-publishers from ALLi

ALLi's Watchdog service does absolutely brilliant work making sure that writers have as much information as possible at their fingertips to help them steer through the labyrinth of self-publishing service providers. We thought it would be a good idea for me to bring you occasional updates here when the Services Ratings have been  updated so you can check out what's new. This week, our tireless Watchdog John Doppler has added ratings for:

Award-winners Reedsy have launched a fabulous new how-to-self-publish learning centre that's totally free. You can read all about it and the reason they thought it would be valuable here. For anyone confused why their KDP dashboard looks different, it's likely to be down to beta testing of a combined KDP/Createspace dashboard showing both ebook and POD sales.

Authors have been speculating in various places recently over sudden decreases in Kindle Unlimited figures. Derek Murphy has written a fascinating post speculating why that might be. Meanwhile it's very interesting to read that Aldi is opening an ebook store in Germany, and that the ebook market in Turkey is growing.

Opening Up – Authors' Guild of America 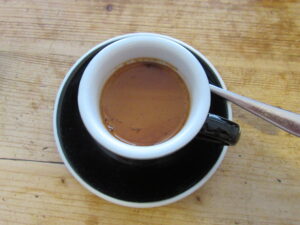 Author organisations are starting to wake up and smell the coffee

Author organisations around the world are starting to open up to indies, but it is particularly interesting to read that the behemoth of such organisations, the Authors Guild, is taking steps in that direction. The headline of their announcement, “Authors Guild Responds to New Economy of Publishing by Opening Membership to Emerging Writers” demonstrates just how limited the intent of their action – the introduction of a membership category for those without a history of traditional publication – is. They clearly still associate “not traditionally published” with “starting out” – indeed, they suggest that members in this category should be working towards publication. Nonetheless, however baby the step, the door is ajar for indies who want to sign up. 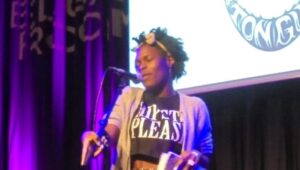 Last week saw the first ever Future of Storytelling Festival. For someone who gets as excited as I do about the ways in which technology could potentially open up whole new avenues of storytelling, this is like sitting down at Christmas and opening all of the stockings. There's a great write-up in the Guardian here, while Lithub offers an equally exciting plea on a similar subject, pointing out the desperate need for great storytellers in virtual reality. And finally finally, we hear lots about the growth of audiobooks, and Salon has a lovely article this week that pays tribute to the people who make this happen – the audiobook narrators.