In this week's Self-Publishing News, ALLi News Editor Dan Holloway fills us in on the latest with Createspace registering more than 50% more ISBNs in 2018 than 2019 and StreetLib offering its authors the chance to podcast.

It seems to be the season of the double award at major literary prizes. Last week, there was the award of 2 Nobels. This week the Booker judges flouted the rules and split the prize. The literary press has talked about little else. My question is simple – if the rules don’t matter when excellence is involved, should we as indies just ignore them and submit our books anyway, expecting them to be read? 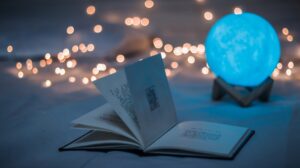 Photo by Dollar Gill on Unsplash

Figures from Bowker always come with a health warning. For years the organisation, which sells ISBNs in the USA, has reported figures that wildly understate the extent of self-publishing. But if you take them for what they’re worth the figures, which combine all ISBNs registered for print books and ebooks, can be very interesting.

That is especially true for 2018. Bowker’s official line is “self-publishing grew at a rate of 40 percent in 2018.” The only real response to that is a Gif search for something suitable. Once you’ve wiped the spat-out coffee off your keyboard, though, there’s an interesting story there. That story is the 50% rise in Createspace-registered ISBNs. 2017 to 2018 saw a rise from more than 900,000 to more than 1,400,000. As Nate Hofelder points out, there looks like a simple explanation for this. Createspace merged with KDP print during 2018. The result is a lot of writers finding it much easier to bring out a paper version of their books. The full report is here.

What will be really interesting is when sales figures are clear. Are these ISBNs for print books “because I can now”? Or are they actually selling?

It's a great year for ALLi members and prizes. Jane Davis won the inaugural Selfies with Smash All the Windows. Now Ian Sainsbury has walked away with the £20,000 Kindle Storyteller prize. The win comes with psychological thriller The Picture on the Fridge. Congratulations, Ian!

Podcast on StreetLib and Scribd in Mexico

Podcasting is an integral part of our cultural move to audio. But for authors wanting to podcast as part of their platform. The ability to do so has felt less integrated. StreetLib have just moved to try and plug that hole. They have announced a partnership with Voxnest. This will enable StreetLib’s authors to use Voxnest’s podcasting platform Spreaker within theStreetLib profile. This feels like a good time to remind you that ALLi’s own weekly podcast can be found here.

Scribd continues not just to keep going but to expand. This week, it announced plans to open up to the local market in Mexico. It will make 60,000 Spanish language titles available. Focusing on local markets is an increasing trend among platforms. Storytel and StreetLib have made it central to their model. It will be interesting to see if Scribd intend to follow suit. This coincides with the launch of Metabooks Mexico, a partnership with Frankfurt Buchmesse. Metabooks Mexico will provide accurate and robust metadata on Spanish-language titles available in the country.

Fun of the Fair: Beyond Frankfurt

In last week’s column I mentioned that this past week saw the last “big beast of the fair season”, Frankfurt. I am always happy to stand corrected by Mark Williams. So as I look at rounding up the main points from Frankfurt, I am also delighted to look towards the Algiers International Book Fair and Sharjah International Book Fair.

Frankfurt saw footfall rise by more than 5% to over 300,000. The overriding theme at Frankfurt this year can be expressed in its slogan “Create Your Revolution.” The theme focused on the role culture can play in times of upheaval. There was focus on politics, talk about the UN's Sustainable Development Goals, and a contribution from Ai WeiWei. The role of culture in the world is something that we all need to think about. Meanwhile the focus in Algiers, rather nicely picking up on “the future” will be on young authors. Over the fair's 11 days, 2.3 million visitors are expected.

Do you make your books available in print as well as ebook format? Is this your strategy or do you just do it because you can? Let us know in the comments below.