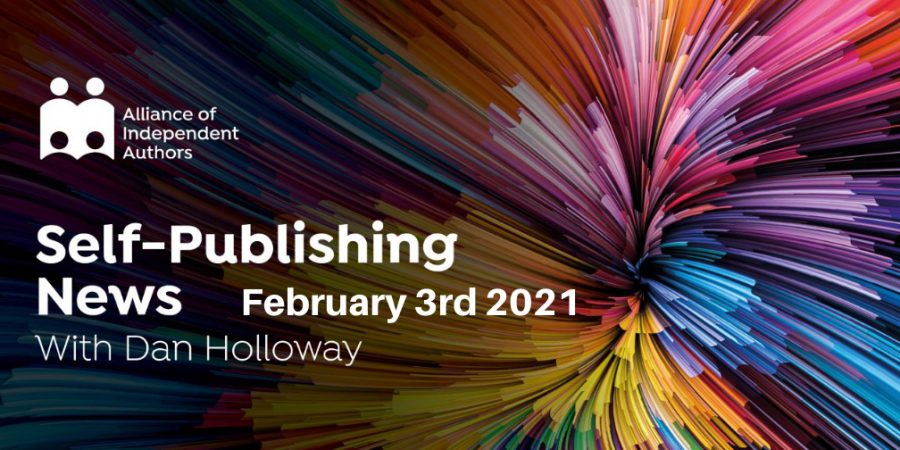 I've been updating you on Brexit for a while. But I am delighted that ALLi gave me the chance to give you the full lowdown on what the post Brexit landscape means for you. You can find the ultimate guide here. It covers things you may have thought of such as sending books to or from the UK and selling ebooks. But it also covers things you might not have thought of but need to know. Like whether you should take books with you to sell on overseas tours. And whether the GDPR work you did on your website is still up to date.

After quarter of a century, it's happened. Jeff Bezos will step down later this year from his position as Amazon's CEO. You can read his full letter to Amazon staff here. What does this mean for Amazon? That's not clear. The letter's ending is typical Bezos, though: “Keep inventing, and don’t despair when at first the idea looks crazy. Remember to wander. Let curiosity be your compass. It remains Day 1.” As for what it means for Bezos, well Blue Origin gets a prominent mention. So expect a decade of tedious/exciting (delete as appropriate) vying with Elon Musk.

Social reading is something we don’t talk about very much as indies. Maybe we should. The amount of money and activity in the field certainly warrants more attention. Just a fortnight ago, Medium announced that it had acquired the social reading app Glose. This week the start-up Literati has raised $40m for its social reading platform.

But what is social reading? In short, it offers people the chance to read a book together and share thoughts on it. We might most commonly think of this, as in the case of Literati, as a online book club. Such clubs feature guest-curated sessions. Sometimes the guests are celebs, which makes it very like a digital version of, say, Oprah or Richard and Judy. But people can also run their own clubs. And because the reach is so much larger than that of an in-person book club, the potential for writers whose books are discussed is also significant.

It's worth pointing out that probably the largest scale social reading experience is one you already know really well – the note facility on Kindle.

I reported last week that ACX/Audible had made some concessions in response to demands from authors. Those included transparency over the number of returns included in an author’s net sales. But it has fallen short of the demands of writers and writers’ groups. ALLi is proud to be part of a coalition of such groups, alongside the Society of Authors and the Authors Guild. And it has been wonderful to see just how instrumental indie authors have been in the campaign. Behind everything has been the tireless work of indie Susan May. Her response to the new arrangements was clear. She tweeted:

Publishing Perspectives has a detailed analysis of Audible’s changes and the response of the coalition of writers’ groups. In short, remaining issues revolve around:

An interesting note to end on comes from Passive Guy’s article on the situation. He notes that many of the complaints made against Audible relate to treatment of writers no different from that handed out by traditional publishers. He wonders when writers’ groups will have them in their sights. Far from not getting started, ALLi has never let up on this.

It is under a year since book fairs started cancelling and, later, changing their plans to move online. That in itself shows how quickly events have moved. As last season progressed, organisers got more adept at staging events online. There were casualties, though, most notably BookExpo, which will be replaced this year by a new event under the guidance of Publishers Weekly. This week, the 2021 event season has started to take even clearer shape. And the picture is a mix of online events and hybrids. Latest to announce exciting online programmes are Leipzig and the American Librarians' Association.

Many of us have email lists. For years we have been told they are the secret sauce. And if your like me, one of the ways you test the taste of that sauce is by comparing your newsletter performance to industry standards. Those are the stats that providers like Mailchimp give you. The ones that tell you open and click rates, and how they compare to others in your field. So I was really interested by Passive Guy's recent post outlining the industry benchmarks for the coming year. They show, for example, a standard click rate for authors of 5.38%. And an open rate of just over a quarter.

And talking of emails, one that made us click this week came from Barnes and Noble. It seems Barnes and Noble Press will now be offering across the board 70% royalties. Barnes and Noble is, of course, now run by James Daunt, who runs Waterstones in the UK. And not for the first time, Waterstones is at the centre of a row over staff pay. Furloughed staff have started a petition for better pay now that they are receiving less than minimum wage. I can't help thinking more people in the industry might be excited about Daunt's announcements if he got excited about paying his staff properly.

What does the rise of social reading mean for writers? And other top #selfpub news stories for #indieauthors, in one quick read, by #ALLi News Editor Dan Holloway @agnieszkasshoes #digitaleconomy #publishingopenup Click To Tweet