It's been one of those weeks that has reminded me of the joy of being indie, both in terms of the news, and on a personal creative level. Traditionally, the last week in August is when the Mind Sports Olympiad is held, and this year I decided to go back there for the first time in 15 years, and take part in the Creative Thinking World Championships, a delightful oddity of an event that sets the most befuddling of challenges and rewards the most outrageously original answers. The first time the event was held, back in 1997, I won the bronze medal, and this year I managed to come away with the gold. With challenges that included writing a story incorporating the lines “from this hand to this shoulder round the back of the ball cage” and “so I ended up naked and holding the lobster things over my boobs”, I put that improvement pretty much entirely down to taking the indie path, where the ridiculous, the incongrous, and the gloriously different are nurtured and cherished. 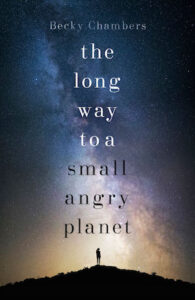 It's been quite a week for opening up to indie authors! First of all came the announcement from the Arthur C Clarke Award, one of the most prestigious fixtures in the science fiction calendar, that the award will now be open to self-published works. Admittedly, this initial openness is restricted to titles called in by the judges, so we can't all enter our titles, but the award's Tom Hunter seems confident that his judges will be actively looking for books to call in, and the tenor of his comments also suggests this is very much the start of a transition to something even more inclusive. Then, there was a breakthrough that had us particularly excited. Back on July 22nd, I mentioned that Digital Book World had put out a call for ideas for its 2017 conference, and that it would be great for indies to get in touch. Well, whether you made the difference or not, this week saw the announcement that in 2017, for the first time, Digital Book World will have a whole day devoted to indies.

Maybe it's because I'd just come back from flexing the grey cells, but I was particularly taken by this story on a new trend in self-publishing crossword puzzles. Reading about it, it seems so obvious. Puzzles, rather like colouring in, are universally loved, are devoured in double quick time, and are endlessly open to being given a slight tweak of originality, which makes them pretty much ripe for tackling by indies. 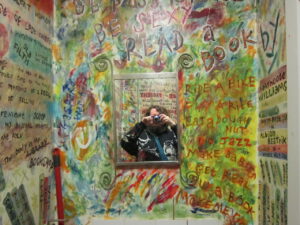 I love this epitome of indieness – the bathroom at the Albion Beatnik Bookstore in Oxford, complete with hand-painted poetry. But if the picture gets “indexed”, who will own the indexing rights, and who will get paid for them and how?

It must be an exciting news week when copyright is bumped right down to item 3! This week, and not for the first time, the development is in relation to images and French intellectual property law. Please go and read the original article for maximum clarity on an issue that appears to affect everyone who uploads, searches, or uses digital images. The long and short appears to me to be that in French law a licensing fee will become payable when an image is indexed, and that such fees will be paid to intermediary bodies who (like ALCS, one imagines) then dish them out to image providers. Two points that leap out are that the payments will be made to these intermediaries whether or not image providers have affiliated with them (so not everyone will be paid for their images) and, most important to me as a big Creative Commons advocate, the requirement to pay a license fee appears to apply even where an image is published under an attribution-only Creative Commons license. Unpicking all of this feels like a Sisyphean task, but the potential implications for creators are worrying.

It may no longer be headline news when Amazon announces a new bookstore, but news that an Amazon store will be coming to Chicago in 2017 is still of interest. Perhaps the most noteworthy part of this article in Fortune, though, is the statement that Amazon's growing bricks and mortar presence is counter-intuitive. For many of us following the fate of print books and great indie stores, and the rise of click and collect, it feels absolutely like the next sensible play.

After AI fiction and poetry and even slush pile sifting, it turns out something you’d think was as simple as following an algorithm is something computers really aren’t very good at yet – curating the news, as Facebook found when it fired its “trending” list compilers and replaced them with digital alternatives. But whatever else the week has brought, for someone (and I know I am far from alone) whose favourite literary moment is *that* scene in American Psycho where everyone compares business cards to the accompaniment of increasingly poetic hyperbole, top story has to be the news that you can now purchase your own e-ink business cards (just $35 a pop).