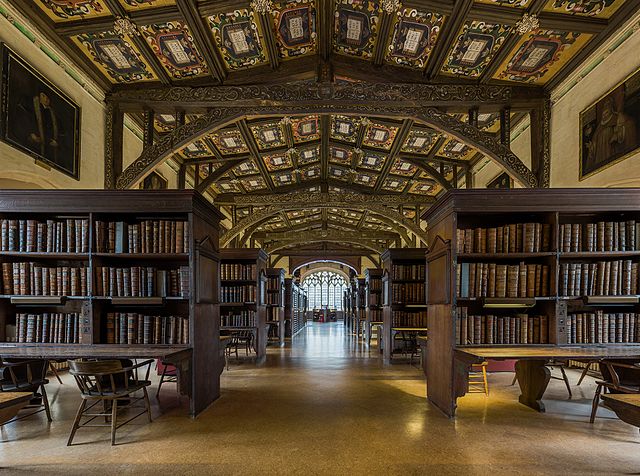 Reading is on my mind at the moment. This coming week I will be defending my European Speed Reading Title at the Mind Sports Olympiad in London. Maybe that's why I seemed to see stories about reading everywhere this week. On Twitter there seemed to be more people than ever sharing the adage that a great writer needs to be a great reader. Those of us who read lots would probably admit we feel we should read more. But that didn't stop almost everyone raising an eyebrow at writer Will Self's claim that he reads 50 books at a time.

Where Do Libraries Fit in Writers' Plans? 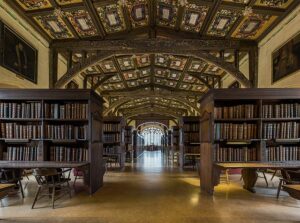 I've brought you many stories in the past year about the ever-expanding possibilities that libraries present to indies. Indeed there's another this week as Toronto became the first library to rack up 20 million downloads. But there's also been a focus on another story that we looked at a short while ago – Tor‘s decision to delay their ebook releases to libraries by four months. When it came, the announcement from Pan Macmillan, who own the iconic brand, provoked scorn. Publishers Weekly has an article this week that looks in depth at Tor's library figures. The numbers tell their own story of the stand the publisher is taking. When libraries remain such a key part of the picture of people's reading habits, and with effortless access to the likes of Overdrive, and schemes to pay writers for borrows, it's clear to see another advantage to having control of one's own distribution.

The Global Expansion of Ebooks

The publishing world's mainstream news has been full of the story that trade paperbacks continue to do well and audiobooks remain buoyant. But over at The New Publishing Standard, Mark Williams reminded us that if we take a truly global perspective, the ebook market has a long way to go to reach saturation. The first is a dizzying reminder of the size of the Chinese market. Ebook company China Literature, a former branch of the giant Tencent has bought film studio New Media Classics for $2.5bn. Second is the news that the ebook market in Germany looks likely to go past $100m in the first half of this year. These first two stories are both timely reminders to think in the widest possible terms.

Tech News: An app for literacy and blockchain 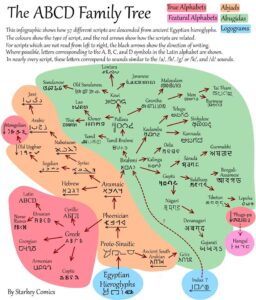 The evolution of alphabets by & copyright Starkey Comics

If reading seems from that to be doing just fine, the government in the UK thinks differently. The Education Minister, concerned at falling literacy rates among children, has announced that the government will be launching an open competition for an app to get kids reading again. Not surprisingly, this has met with some derision. Nonetheless, those of you with a technical inclination might want to get the grey cells working.

Meanwhile, as DigitalBookWorld approaches, there has been some interesting industry interest in two of its more interesting attendees. Publica and Bookchain are both using blockchain technology for publishing. Blockchain has become such a ubiquitous term there's an unsurprising backlash in many quarters. Nonetheless, the industry, and copyright experts in particular, are finally seeming to take an interest in its most promising application – a system of ownership that avoids the multiple difficulties of DRM (edited to add that the author of this piece's examination of DRM holds that blockchain still relies on something like DRM. I disagree in large part but that is for another day. My point remains that people are now starting to home in on the issue).

How Free Are We as Writers? 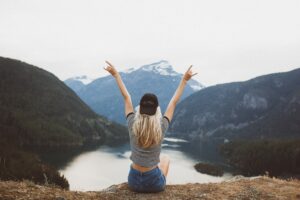 What does freedom mean to you? Photo by Becca Tapert on Unsplash

I steer clear of politics here, and will do so again with this story. But freedom of speech has become such a hot potato it is worth a reminder that this is a massive issue for us as writers. Probably the best way to tackle it here is a brief survey. In the past week three different stories have had a high profile. Each of them raises vital questions for us as writers. First, there was a provocative piece about the subject of cultural appropriation and sensitivity reading. The piece makes a passionate case for writers' freedom to create any characters they wish.

And then, of course there has been the widespread and coordinated banning of various channels and speakers from social media platforms. What is interesting here is the reception of the news. In particular, two progressive outlets, ACLU and the Index on Censorship have been vocal in their condemnation of the ban.

And finally, a key question around free speech is what we can say around “privileged” information. I remember the furore when I was a student around Peter Wright's Spycatcher, his memoir of a life in the secret service. This week the publication of Omarosa Manigault Newman's book about her time inside the White House has raised similar questions about the extent of legal reach and non-disclosure agreements. The White House has taken legal action against publishers Simon and Schuster. In return, the Authors' Guild of America has issued a forthright condemnation of that action. In short, wherever we stand on free speech, we need to think about it, and to ask questions of ourselves about what we, and writers in general, should be free to say.