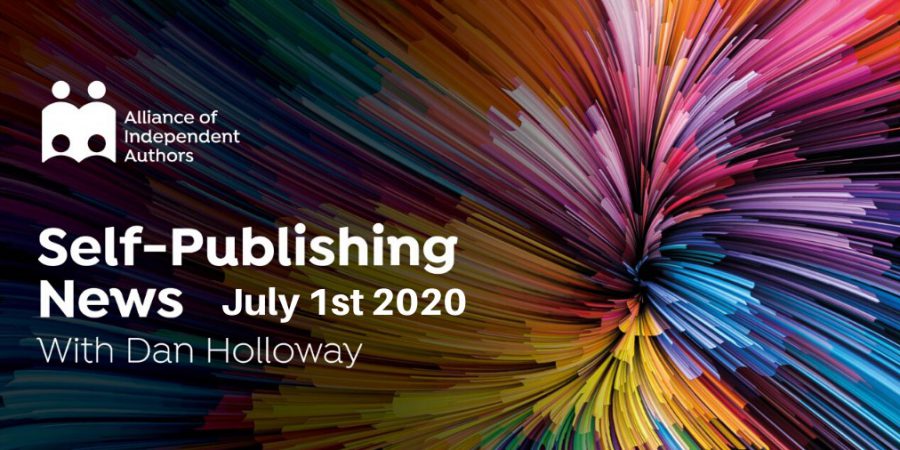 It was a pleasure as always talking to ALLi's podcast editor, Howard Lovy for the latest self-publishing newscast. Can I also point you towards the write-up of last week's #indieauthorchat on twitter on the key lessons indie icon Adam Croft has learned. And I heartily recommend tonight's version (8pm UK time, 3pm Eastern, Noon Pacific). It's on a subject very close to my heart: the balance between creativity and profitability.

We have been reporting for a while that Frankfurt will be operating a “hybrid” model for its book fair this year. Hybrid, of course, is something that many of us are familiar with. The exciting news is that for the online part of that mixed model, Frankfurt is looking for contributions. They want your ideas for interesting, engaging, and exciting sessions. There will be a particular focus on diversity and inclusion. So if you have a session in that area that you’re burning to propose, you have until July 15th to do it. The form to use is here.

Overdrive is, as you will know, the leading provider of digital content for libraries. We can access that supply line through many of the platforms we use to distribute our work. Last week, Overdrive announced in a press release that they were acquiring the library-relevant bits of RB Media. That will significantly add to its audio offering to libraries in particular. That's very interesting. But as Nate points out at The Digital Reader, Overdrive and RB are both owned by investment fund KKR. So it's more of a reshuffle than an acquisition. But it's clearly the reason behind the double purchase. What KKR now does with the beefed-up Overdrive will be very interesting to see. And important for us to follow.

Amazon in Sweden and India

Amazon are finally speaking to publishers about a Swedish store. This is really important. It’s important because of Sweden’s significance in the book world. Specifically Sweden’s significance in being home to two of the companies driving the current shift in how we buy consume – and pay for – books. Bookbeat and Storytel are highly successful subscription platforms for electronic content, especially audiobooks. And while both are on a mission to become truly global, their core customers remain in Scandinavia – for now.

I want to treat the Bookwire conference on audiobooks as a separate item, but a key message matters here. Subscription streaming is inevitable. And at the moment, Bookbeat and Storytel lead the way. In that context Amazon’s move on their home market is significant.

Amazon's other big move this week has come in India. This has been another key market where the behemoth hasn't always acted in what seems like a timely way. One of the reasons for that may be something Mark Williams and others regularly point to. India may have a lot of very tech savvy citizens, but its consumer habits remain very analogue. One area this is very evident is with textbooks. Rather than moving to digital textbooks, there is a widespread use of paper copies of textbooks. This is so prevalent that copying is legally considered fair use under copyright law. Rather than doubling down on digital, Amazon is now seeking to exploit that market for physical goods. It is investing heavily in a series of smart stores in order to do so.

Audiobooks continue to be one of the industry’s most exciting sectors. Though, as Bookwire’s All about Audio conference highlighted, it is still relatively small. In the US it represents only 9.5% of the market (though that is more than half the size of ebooks). That's worth remembering when we consider the latest figures showing more double digit audiobook growth. The most interesting contributions to the event came, fittingly, from Storytel’s Helena Gustafsson. By way of contrast to the US figures, in Scandinavia audiobooks make up 50% of the retail market. So Gustafsson has some key insights into what a large scale audiobook industry looks like. And the most striking factor is the dominance of local-language content. Not only that, but she found 86% of Storytel's bestsellers were by authors local to their market. When we think about the effort involved in distributing our books across territories, that's really interesting. Likewise, when it comes to decisions about whether to fund translations of our work.

The two other key takeaways from the event are also really important for us. Subscription is growing and won't stop. And if audiobooks are growing strongly, then podcasts are really growing strongly, and are completely different as far as content is concerned. In short – audio is the future, but it's a complex and diverse future, and to benefit from it we have to understand that.

Frankfurt Book Fair wants to hear from you, the latest insights on audiobooks, and top #selfpub news stories for #indieauthors, in one quick read, by #ALLi News Editor Dan Holloway @agnieszkasshoes #digitaleconomy #publishingopenup Click To Tweet