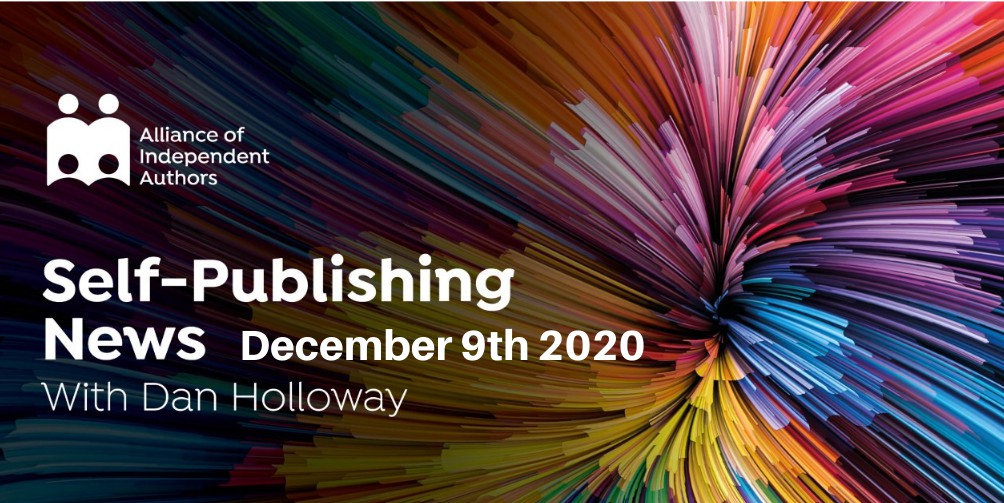 Tomorrow Howard and I will be talking about Bookshop.org and Audiblegate in our latest self-publishing news podcast. Don't forget that tonight at 8pm GMT (3pm EST) we have #indieauthorchat over on Twitter, where the talk will be about uploading a book top Amazon!

If you can remember back to the start of the year, you will recall another scandal surrounding Audible. Publishers went to court to stop Audible launching its proposed Audible Captions feature. Their argument was that this was a rights grab, and amounted to Audible claiming ebook rights where they had only been granted audio. It didn’t matter to publishers that this was an accessibility feature. Or that the experience of captioned narration is very different from e-reading.

Now, at the end of the year we learn that the latest Android update will be doing the opposite. It will auto-generate narration for ebooks. Unlike some really clunky early computer-voiced apps, this will use machine learning to create a number of different accents for readers to choose from, with realistic prosody. As Chromeunboxed put it “Google wants to turn every book into an audiobook.” What really interests me is a line I found in every article covering the story. “Google Play is working with publishers in the U.S. and the UK.” That seems to me like a big old shift!

I reported last week on the response of Bookshop.org to the removal of print on demand titles from their shelves. Indies were definitely pleased. This week, though, I’ve noted some criticism bubbling up from booksellers and publishers. This coalesced into a very detailed article in The New Statesman which sought to point out that the terms Bookshop.org offered to publishers and bookstores were advantageous to neither. It also hinted that bookstores had felt under some pressure to join the Bookshop.org bandwagon. Perhaps most damagingly, it claimed that while sales through Bookshop.org have boomed (£2.2m in their first month) since their UK launch, there is little evidence that these sales have come, as intended, out of Amazon’s piece of the pie rather than the direct sales of bookstores.

There has also been criticism of the role of the Booksellers' Association, who represent booksellers' interests and supported the UK launch. Booksellers have expressed unease at this relationship. A particularly loud critic has been James Daunt, of Waterstones and Barnes & Noble. There is criticism that the finances are not transparent, despite the company filing for B Corporation status, which requires the highest level of transparency.

Interestingly, the New Statesman article now has an update at the end, which contains a response from Bookshop.org. This is interesting from several perspectives. First, it states Bookshop.org’s commitment to not undermining sales that would otherwise have come direct from local stores. But second, it reflects my own experience of their willingness and swiftness to respond to situations as they arise. Now, this could of course be because they are a well-oiled PR machine (though the senior person I spoke to was a former indie bookstore owner clearly multitasking under pressure and going out of his way to be responsive). On the other hand, as a journalist give me over-responsive rather than unresponsive any day. And I’m sure the thousands of authors trying to get Audible to communicate would echo that!

Libraries are back at the heart of the news this week. That’s a refreshing change from the domination of the news by Audible. But the first item feels as though it’s related to this story. That is to say, what we are seeing once again is Amazon making strategic moves in a marketplace. Now it has started talking to Digital Public Library of America and its app SimplyE about making its ebooks available to libraries. This is a potentially massive play. And in its sights, very clearly, is Overdrive. It makes sense of course that Amazon wouldn’t talk direct to Overdrive, a platform that enables many of us to go wide. This is a story with a huge “watch this space” sticker.

Talking of libraries, it’s been a while since we focused Overdrive. Needless to say, the Audible scandal has made more indies look more closely at distributing their books more widely. So it’s good to have a story that will remind people just how important Overdrive is within the reading ecosystem in a positive way. After just 11 months, Overdrive is set to hit 366 million downloads. That’s already more than 40 million more than in the whole of already record-breaking 2019. And it's big enough to make any potential fight with Amazon really interesting.

Help us fill this with great online events in 2021.

SelfPubCon: the Self-Publishing Advice Conference will take a theme of writing craft this year and move to 3/4 July, to report from the London Book Fair.