The big literary event of the week for me was the year's first Oxford Professor of Poetry lecture, an event that happens just three times a year. The title was the wonderfully tempting “Poetry and the Underworld: Access All Areas”, and Simon Armitage took us on a wonderful exploration of the poet's conversation with death. It was one of those times when I felt as though both (OK, two of) my lives sat comfortably together. As both poet and indie I have the same remit – to go to the places other writers will not. And OK, I know 2016 will always be “the year we don't mention” but as I write about poets communing with the dead, the big kahuna himself shuffles off the mortal coil. Stop the clocks. There's a crack in everything/ that's how the light gets in. Goodbye, beautiful man, we're all so glad you didn't take all your beautiful words with you.

It's strange the way most weeks there feels like a theme dominating the news, and this week the overwhelming theme is bookstores. The biggest of this week's stories is the partnership between America's second-largest bookstore chain Books a Million and Silicon Valley self-publishing company Fast Pencil. The team-up allows BAM! Publish, the publishing platform for Books a Million, to offer subscribers to its premium packages placement on the shelves of its stores. It's not wholly dissimilar to schemes Barnes and Noble have recently introduced, but with these packages starting at $1,799 authors who want to be everywhere could soon find budgets running out of control.  If you are interested to know more, BAM! Publish features in the latest updates to ALLi's Services Watchdog. 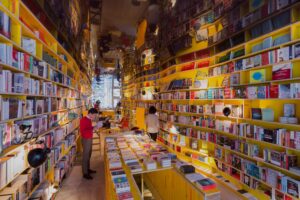 London's Libreria, one of a growing number of concept stores that provide a fascinating opportunity for indies.

Audiobooks are the one sector of the publishing market everyone agrees is on the up and up, and after a few weeks of anticipation, audiobook producer Libro.fm has announced a deal with the American Booksellers' Association that will allow indie bookstores to sell its books and take a commission. Another thing we hear a lot about are so-called “concept stores” (apparently Barnes and Noble's bookshop + restaurant thing was out there enough to merit the title. Who'd have thought). I particularly enjoyed Publishing Perspectives' look this week at the growth of so-called “small concept” stores in South Korea. These are stores that are highly curated, often themed, and whose books are part of a wider experience. I've always found it strange that when retail has been thriving through increasing specialism, many bookstores have been rushing to offer as much of everything as their shelf space will allow. Ditching that aim is leading to some really exciting spaces, and ones that are particularly amenable to indies. In the UK, for example, Libreria, nestling off Brick Lane, arranges books by philosophical theme and has a printing press in the basement.

Amazon's big move this week has been to roll out Kindle Unlimited in Australia. Even more directly affecting indies is the start-up of Palatium, a global subscription service that will focus entirely on curated indie books. With advances being offered for selected titles, I'll be watching this, and the criteria for curation, with a keen interest. Meanwhile, BookBub have launched a survey to ask what people would like to see on its marketing blog. If you have questions you always wanted to ask them, now is your time to pitch them directly.

It's been another busy week for ALLi's Services Watchdog, and the following have all been added to the ratings page: Dog Ear Publishing, Outskirts Press, Barbara Bauer Literary Agency, Reviewers for Books, BAM! Publish 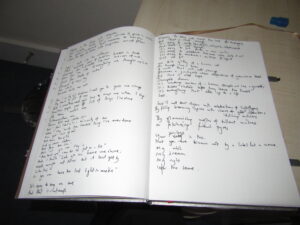 My poetry is pretty much always written longhand

NaNoWriMo has been sparking some interesting conversations about how we write, the practical perils of longhand and computer writing, and which method is most effective. So I was delighted to come across this post that looks at the ways in which how we write changes the words we use and the style we adopt.

The Self-publishing Conference, Apr 22 [Leicester] All the week's top #selfpub news from @indieauthoralli for #indieauthors Click To Tweet