Thriller writer Alison Morton shares her experience of using the services of BookBlast to boost sales of her first novel, Inceptio,  just before self-publishing its sequel, Perfiditas – a useful tactic to build momentum and interest of her Roma Nova series in the US market. 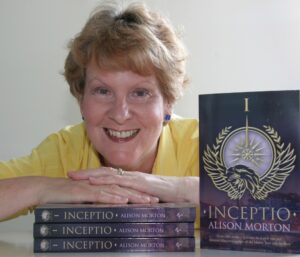 The second book in my Roma Nova alternate history series, Perfiditas, was due out on 17 October 2013, and, to increase pre-launch interest, I decided to discount the first book, Inceptio. For a new author with her debut novel book, I’d achieved respectable sales both hand-selling and online, plus 41 4* or 5* reviews on Amazon UK, 12 on Amazon US (all but one of them 5*) and a GoodReads average rating of 4.41. Added to that, Inceptio had been shortlisted for the International Rubery Book Award and been awarded a BRAG Medallion.

My twin goals were visibility and discoverability, the two buzzwords for self-published work. Before my first dip in the promotional ocean, I researched the big companies: BookBub, Pixel of Ink, Ereader News Today. Eventually I decided on a smaller one, Book Blast, cited as one of the following pack in David Gaughran’s Let’s Get Visible. Two factors were important: list segmentation and cost.

I asked for a date and category. Inceptio is marketed as an alternate history thriller, but it has strong elements of action adventure, history and a core romance, so I could be flexible. In the end, the helpful Jason at Book Blast suggested fantasy. Information about my book would be emailed to 10,000 people who had signed up for that list. I paid my $15 happily.

To be included in a BookBlast promotion, a book must be on offer at the time, so on 2 October, ahead of the blast day scheduled for 5 October, I reduced the price from 2.99 to 0.99 in pounds sterling, US dollars and Euros. How embarrassing would it be not to have it all ready? I elected to do this on Amazon only – they are the big one and easiest to alter. I tweeted and posted to Facebook about the promotional price (but not about the Book Blast listing) and tracked an increase in sales, which had dropped off in the previous month.

On blast day, I was glued to the computer. I had plenty to do for the release of the second book – writing guest posts, sending invitations for my UK paperback launch in November, interacting with media, even working on my draft of book 4. I tracked my ranking on Amazon US throughout the day and watched it rise from #104, 459 on 2 October to the heights of #5,662 in Paid in Kindle Store. It achieved:

For over 24 hours, INCEPTIO was on the first page of the alternative/alternate history listings. As I write, the rankings have, of course, dropped: overall Paid in Kindle Store stands at #16, 063, but that’s a hell of a lot better than #104,459.

The objective of this initiative was to test the North American water, to sell enough books to trigger some extra reviews and to try out paid promotion.Hopefully, the reviews will come later, but over the period of 5/6 October, accounting for time differences, I’ve sold two-and a half times my normal number on Amazon.com but around the same as before on the UK market. It’s not a lot of books as such, and they’re at a third of their normal price, but I learnt early that the objective of my first book was to gain a presence, a reader base and fans. Poised to launch book two in the series, Perfiditas, I feel I’m in a better starting place than I was even a few days ago and I’ve had a blast, too!