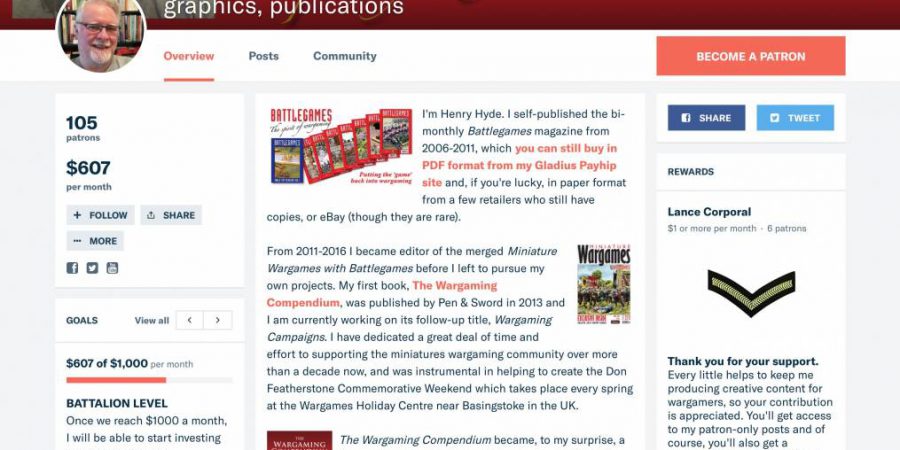 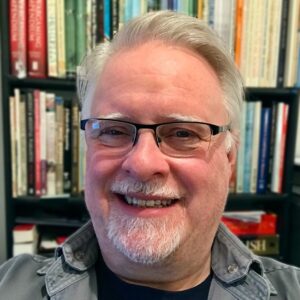 Running a successful indie author business need not depend on writing and selling great books. Many writers, no matter how their books are published, also make a significant income from other sources such as public speaking, journalism, and merchandising. Having multiple income streams is a great way of spreading risk and building secure growth.

In this post, author, journalist and book designer Henry Hyde shares his experience of adding Patreon as an income stream to his author business model, with impressive results.

After a difficult year following my decision to quit my post as editor of a monthly hobby magazine, and my mother’s death shortly thereafter, I realised that I needed at least a modest level of regular income as an anchor in the rough seas of life. So, on 5th January 2018, I took the plunge and launched myself on Patreon.

Just two weeks later, I have over a hundred patrons already, and between them they have pledged over $600 per month to enable me to create blog posts, podcasts and videos for the miniatures wargaming hobby.

Patreon – a route to patronage in the 21st century

Patreon is an online crowdfunding business.

Perhaps you’ve heard of Kickstarter, which enables creatives and entrepreneurs to fund specific, discrete projects via public subscription. Some Kickstarter initiatives have raised tens of millions of dollars. Our own Orna Ross was able to fund the production of a special edition of W B Yeats’ poetry bound with one of her novels via a (now sadly defunct) outfit called Pubslush.

Patreon is similar, but facilitates the ongoing support of creatives of many kinds.

Over 50,000 film producers, comedians, artists, photographers, musicians, scientists, writers and many other types of creative are benefiting from regular Patreon subscriptions.

Patrons commit to paying a maximum sum either per item produced or per month.

For example, self-publishing guru and author Joanna Penn funds her podcasts per episode, whereas I have asked my patrons to commit to a monthly amount because that suits me and my creative output better. 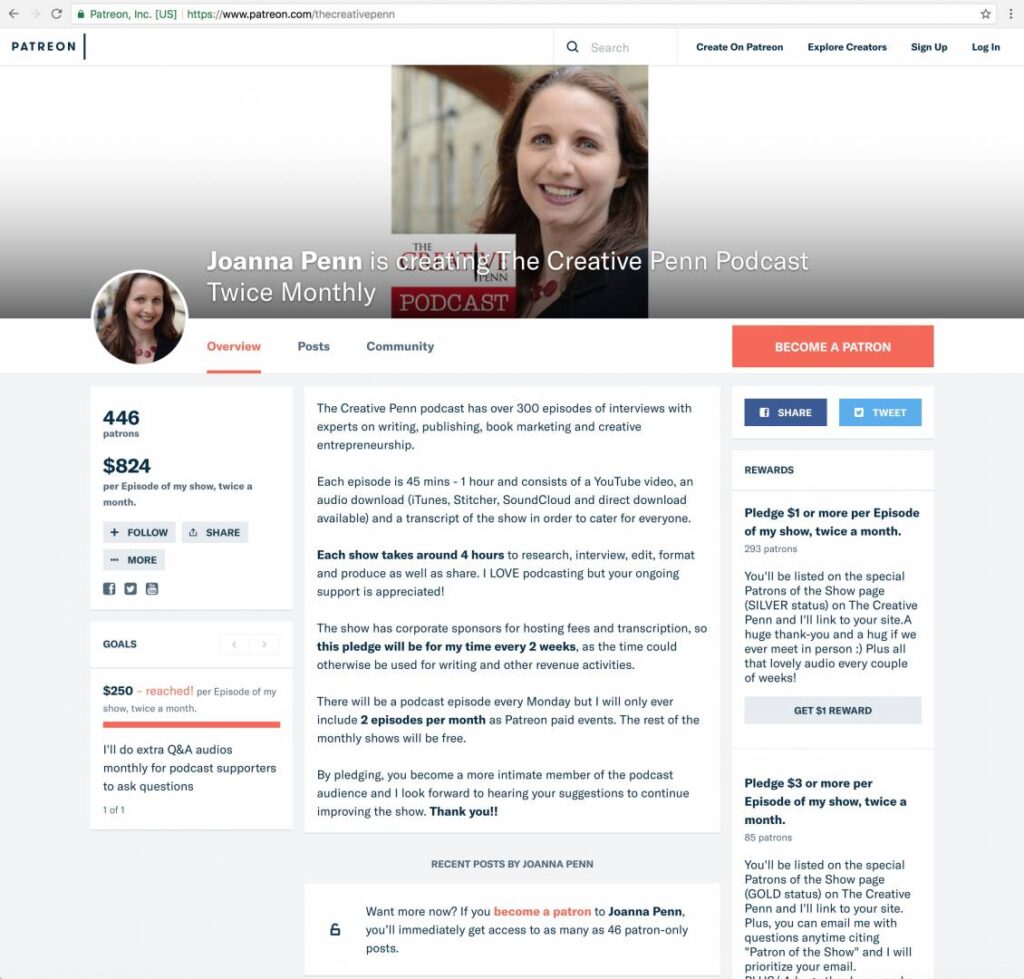 How Does Patreon Work?

You begin by visiting www.patreon.com and opening an account. You declare the kind of content you plan to create and whether you want supporters to subscribe on a monthly or per item basis. In a similar way to social media accounts and blogs, you create a unique page including a banner header, a mugshot of yourself and an ‘About’ page telling potential supporters about yourself and what you plan to do.

This page is critical and makes the difference between someone committing to your project or not.

It should be honest, engaging and reasonably detailed: it’s your sales pitch and manifesto.

Be sure to target your tribe, the people you want to take on the journey you are about to embark upon.

In my case, I had an accurate idea of my tribe already: the same people who had subscribed to my niche hobby magazine back in 2006 and who continued to support me over the decade that followed, despite changes to the magazine and its ownership during that time They were also the people who had bought my first book and are likely to buy the next one. Sure enough, I’m recognising the names as they come aboard! 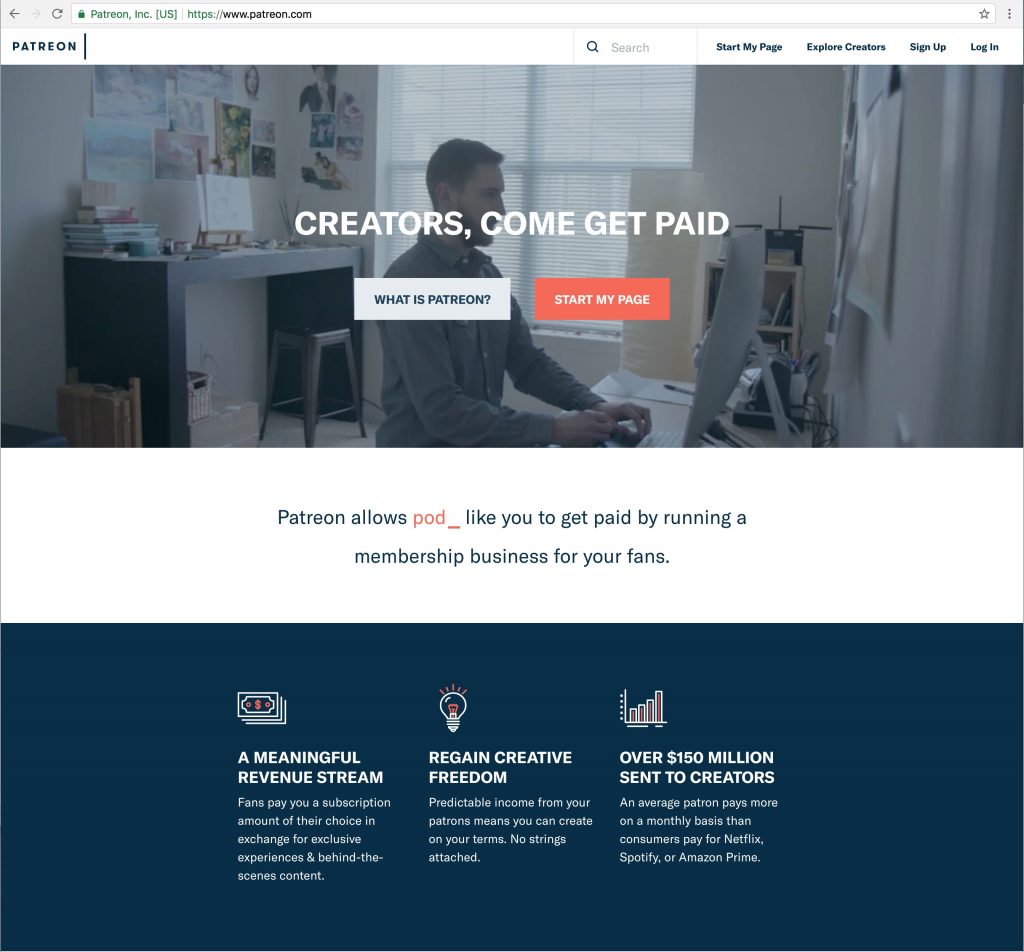 Two critical aspects to decide from the outset are:

In my case, since the project has a military theme, I gave the pledge levels appropriate ranks, ranging from Lance Corporal at $1 a month, all the way up to General at $50 a month. (I never thought I’d get any of those, but I already have two!) Rewards go from simply being able to access the patron-only content at the lower ranks to personalised gifts at the very top.

Those committed to higher pledge levels are given greater access to me in return, via special Q&A sessions and, for the ‘top brass’, exclusive video chat sessions.

You can visit my page and see it in action here: www.patreon.com/battlegames/posts 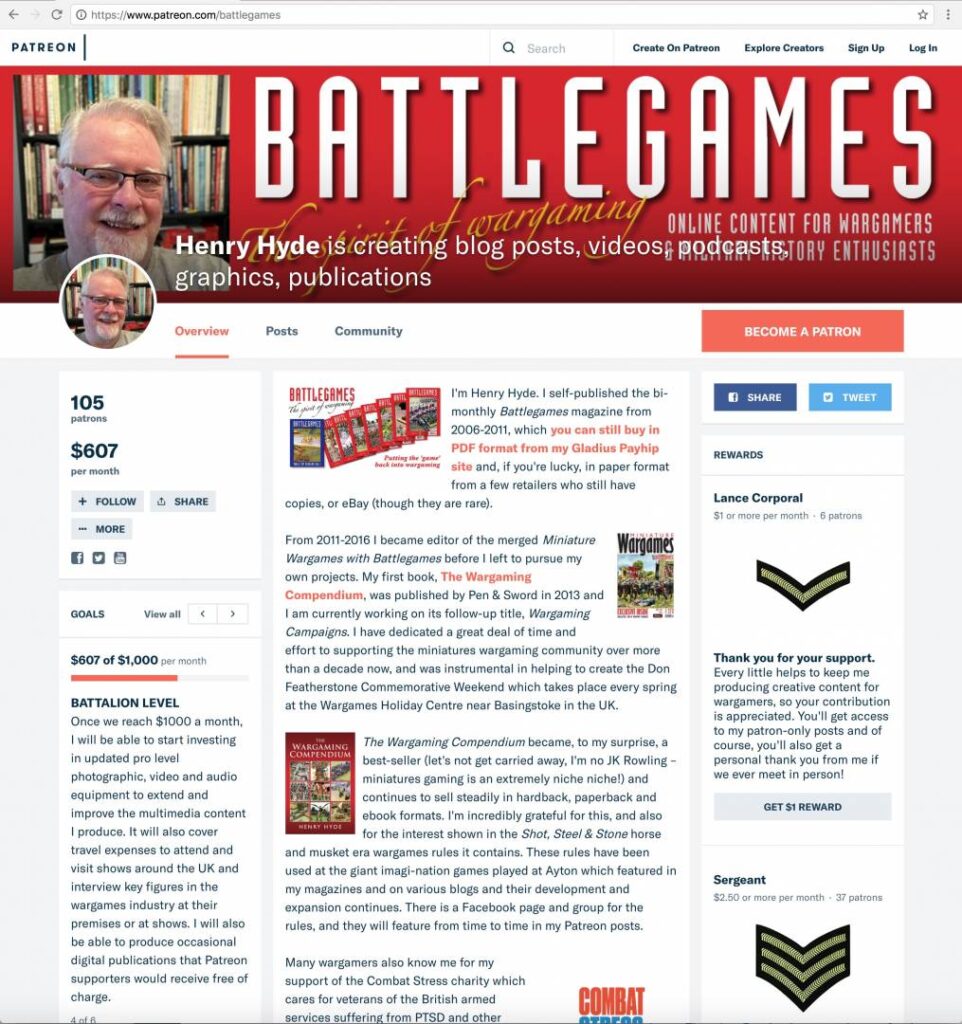 Naturally, be sure you are completely comfortable with the promises you make, because this kind of access may not suit everyone.

To me, it feels very familiar and just like running a magazine – these hardcore fans are your greatest cheerleaders, and they are more like friends than just customers.

Of course, patrons can change or cancel their pledge levels at any time, so it literally pays to keep them happy and engaged. This is made easier because, like with regular blogs and social media, patrons can post comments under the posts you make and begin or engage in existing conversations on your “Community” page.

The other aspect is your goals and what you are prepared to commit to if/when they are met. In my case, I made it clear that the higher the cumulative monthly total, the more time I would commit to production in return. The first goal was $100 a month, then $250, then $500. These were all exceeded in less than two weeks and now we’re heading to the fourth goal of $1,000 a month.

The finances are all handled by Patreon. You give them your PayPal or other payment processor details, and every month they deposit the collected funds in your account. They charge a 5% flat fee plus a small processing charge.

All the payment procedures are clearly laid out and you have access to detailed monitoring tools on your dashboard, enabling you to check on all payments received and the status of individual patrons. Note that Patreon charges the patrons’ cards/accounts on the first of each month and processing may take a few days longer, so you might not actually see any cash in your account until a few days later.

The swift success of the scheme has rather caught me off-guard. I imagined growth would be slow and steady, but instead I am faced with fulfilling a lot of rewards much sooner than expected!

It really helps to be noisy on social media during the first couple of weeks and to impress upon those who sign up that you need their help to spread the word. The more patrons who come aboard, the higher the total will rise and therefore the more you can produce for them.

It’s a win-win formula if you can convince your customers to become your sales team!

In this launch period, I’m using Patreon’s tools to run polls to check on precisely what my supporters are expecting from me and uploading ‘primer’ blog posts, podcasts and short videos to let them know what I’m planning. This both reassures them and makes them feel involved in what is, essentially, a collaborative process.

I’m also getting agreement with the subscribers about the production schedule, the type of content they prefer and even the specifics of subject matter.

The tribe is bonding.

If you have a loyal tribe of readers or followers and you’re keen to produce creative work on a regular basis for them, then Patreon could well be the vehicle for you to pursue your dream and provide you with a steady – and, hopefully, increasing – flow of income.

There’s literally nothing to lose by trying.

For more information about how Patreon works, check out this video.

OVER TO YOU What has been your experience of Patreon or similar services? Do you have any advice to add to Henry’s overview?

Indie #author in a niche? Check out @battlegames' success story with @Patreon as an extra income stream Click To Tweet

Henry is undergoing a disgraceful mid-life crisis and throwing off the shackles of his sensible past. He loves writing, reading, music, visual arts, martial arts and cooking and lives in lovely Brighton & Hove. Oh, and cats, don’t forget the cats. For more information, see his main website: www.henryhyde.co.uk.