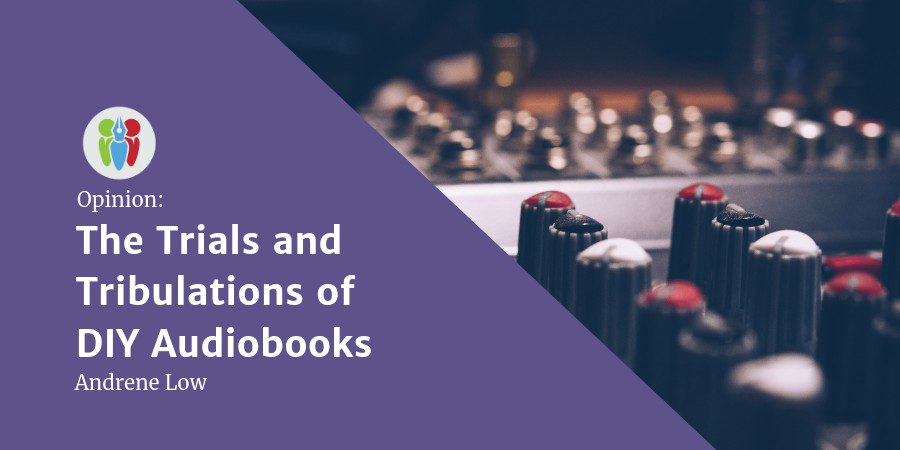 Audiobooks are the flavor of the month. But getting one recorded by a professional doesn’t come cheap. However, Andrene Low author member, is here with a hilarious take on the trials and tribulations of DIY audiobooks.

The Trials and Tribulations of DIY Audiobooks

If the constant plotting, writing and editing weren’t enough, add in the never-ending promotion and my plate wasn’t just full, it was overflowing. So of course, I added recording my own books to the teetering pile that was my to do list.

There’s a saying about leaving no money on the table, and it was this that made me dip my toe into the audio book waters. Actually it wasn’t so much dipping as diving in from a great height and throwing in a triple axel for good measure.

Deciding to DIY My Audiobook

My enthusiasm was warranted. Audio books are popular with commuters or those wanting to ‘read’ while exercising. It’s also said readers love hearing authors narrating their own stories. On the flip-side, other readers — listeners — detest it.

It was watching a podcast featuring Derek Doepker that motivated me. Apparently a lot of authors are narrating their stories these days, and successfully so. I have to admit thoughts of not splitting the royalties, or being exclusive to one retailer, appealed. I’m ‘wide’ and proudly so.

The first thing I invested in was Derek’s on-line course (http://audiobooksmadeeasy.com/). While not an impossible enterprise, there’s no way you can simply give recording audio books ‘a whirl’, any more than you can just ‘walk into Mordor’.

The Kit You Need 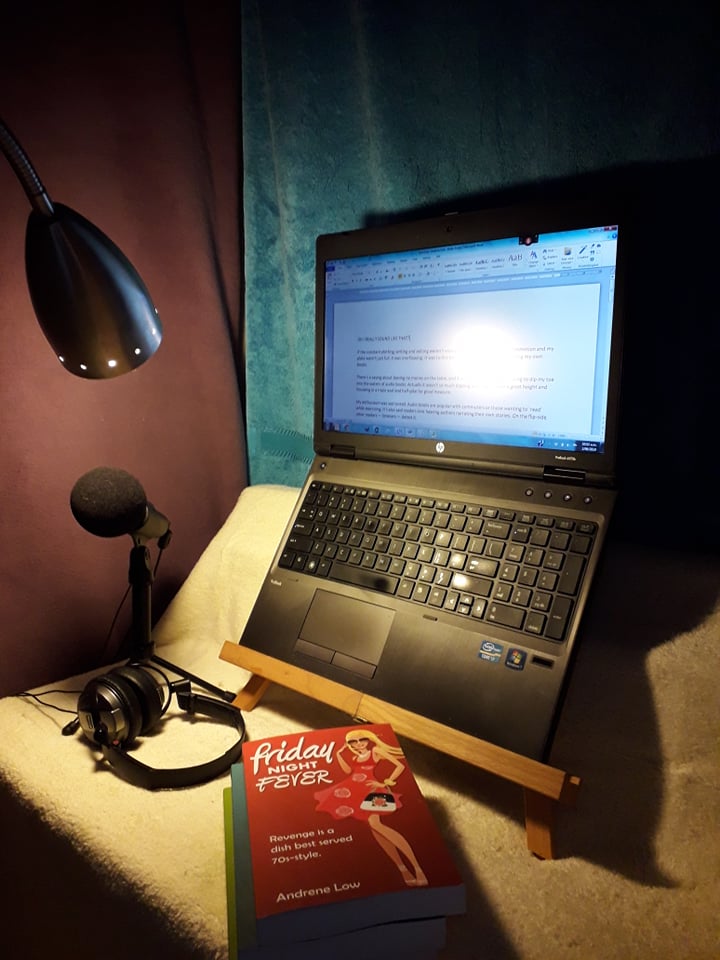 As per the course, the first thing I bought was a dynamic microphone — I got the Samson Q2U Recording and Podcasting Pack containing a mic, stand, wind screen, XLR, and USB cables. Whatever brand you decide on, the key point is that the mic is ‘dynamic’. This stops it from picking up things like your rapidly beating heart or the results of that dodgy pie you ate for lunch. Lucky for me, the headphones I already owned were up to the task.

Next on the list was downloading the Audacity software. This is free and necessary for the post-production required to have your files suitable for distribution. There are other programs, but I found Audacity to be intuitive and Derek confirmed the files would be to a standard they’d be accepted by retailers. No point spending hours recording your work only for your files to be rejected.

Before I could start recording, I needed a sound booth. Fortunately this didn’t need to be anything as elaborate as lining the walls of the spare bedroom with old egg cartons, although I do enjoy an omelette. It only needed to be large enough to hold me, a desk, chair, and my computer.

Cue temporary cone of silence at the end of the hallway. Luckily I’d built a lot of blanket forts when I was a kid because that’s essentially what this was. It took a whole Saturday to build it, all without nails so it could easily be taken down when I needed the blankets back on the spare bed.

The weird thing about the blanket fort was that it had the properties of a black hole. No sooner had I pegged the blankets closed than sound was sucked in. After being quiet all day, the kids next door decided to kill each other, with the dog helping. Their father then mowed the lawns, and my geriatric cat sat right outside the fort howling.

But the noise wasn’t my biggest challenge. That would be me getting excited about the process, plugging everything in and going for it, without reading the instructions. Interesting what a difference setting the microphone up properly makes.

That sorted, I read through my sample piece half a dozen times to get a feel for it. No point recording if I’m stuttering and tongue-tied. Sure I could edit any stuff-ups out in post-production, but the less tweaking required, the better.

I turned on the Audacity program and the microphone, and my tongue doubled in size and I stumbled over words like ‘but’ and ‘that’. Who’d have thought you could suffer from stage fright on your own? It’s not like I’m a stranger to the microphone, having performed stand-up for three years, with enough success they kept asking me back. Did it prepare me for narration? Ah, that would be no.

Only at this point did I notice how hot it was inside the blanket fort. Would the sweat dripping off the end of my nose screw up the microphone? Would I pass out and wake to find the cat licking salt from my still-warm corpse? I didn’t quite get down to my underwear, but it was a close-run thing.

Ready to move on, I watched the section on converting WAV files to MP3, the format preferred by retailers. It’s not quite as straight-forward as you’d imagine. Again, the on-line course proved invaluable, taking me through this step-by-step.

After processing the file correctly, I saved my sample and sent it off to Derek for him to give it the thumbs up, or down. Failed the first time, passed with flying colours the second. With the official nod, I was off with a hiss and a roar (both to be removed during post-production).

I expect to finish recording ‘Heels and a Tiara’ — the Aussie-based prequel to my ‘That Seventies Series’ — any day now. After this I’ll need to save each chapter as an individual file, ditto the intro, outro, and credits. An audio book truly is a sum of its parts.

After surviving the blanket fort, the upload will surely be relatively straight-forward. Then it’ll be a matter of waiting a couple of weeks, or more, for it to go live. And when it does, I’ll be shouting it from the rooftops — in a well-modulated voice with even pitch and pacing. I’ll then be moving onto Friday Night Fever, Brush With Fame and Strapped for Cash, the novels from the same series. At 90, 100 and 110 thousand words respectively, I may be in the blanket fort for some time.

As to whether I’ll record my cozy Marina Witches Mysteries, I’m undecided. With the heroine being from Portland rather than Australasia, my New Zealand accent might ‘spell’ disaster.

Have you recorded your own audiobook? Did you encounter any problems? What trials and tribulations of DIY audiobooks did you discover on your journey to published audiobook?

Andrene's love of writing was instilled in her by her mother, although if her mum was still alive, she'd be smacking Andrene across the back of the head given the direction some of her writing has taken. Irreverent, cutting and reflecting her background as a stand-up comic, it's edgy with humour that can be very dark in places.

Andrene’s currently concentrating on her cozy Marina Witches Mysteries about a jinxed witch with Bruce Lee moves and her muffin-loving Jack Russell familiar. Meanwhile simmering away on the back burner is DietVale, a comic horror set on a fat farm and that follows the premise “When you say you’d do anything to lose the extra weight, do you really mean it?”.

Andrene lives in the beautiful Hawke’s Bay region of New Zealand with Jasmine a geriatric cat that loses more hair than she had in the first place.