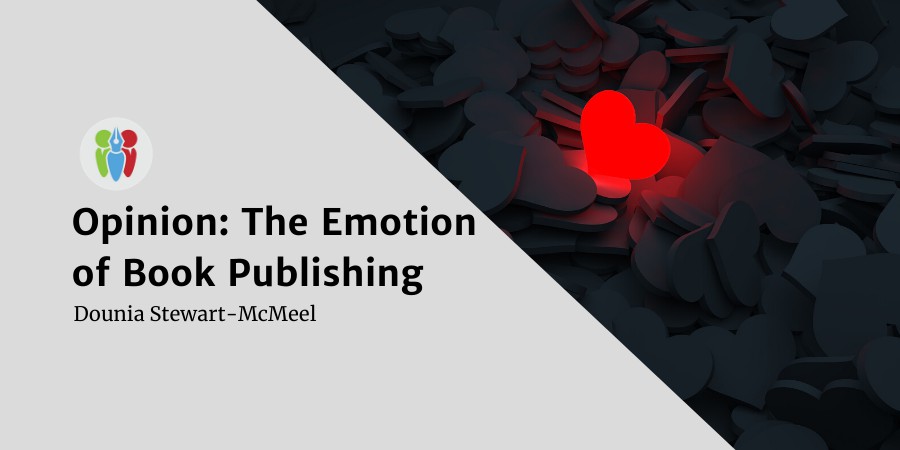 Opinion: The Emotion of Book Publishing

Once you've published a book or three, it's easy to forget the emotional rollercoaster the first book took you on. Sure, there are always highs and lows in this business, but there's nothing quite like the first book. ALLi associate member Dounia Stewart-McMeel knows the emotion of book publishing all too well. She tell us about her journey trying to publish her first book.

Why Did I Decide to Write?

A few years ago, I planned to start a business making personalised children’s books with their photos in the story. The upfront costs turned me off, but I wrote one for my niece in 2018, which was well-received. My sister liked it so much, that she said I should publish it.

Months later, buzzing with excitement, I decided to do just that. My enthusiasm was high, my publishing knowledge was non-existent! I hadn’t heard of self-publishing, ALLi, KDP or Ingram Sparks. I planned to use images online, make a book, print off 100 copies and sell them on Amazon and eBay.

I wrote a new book, based on the one I wrote for my niece but with some amendments. I decided to take out the rhymes, make it non-fiction and include loads of factual information. I also wanted to make it inspiring and have real photos. However, it's aimed at pre-schoolers and Key Stage 1, and bizarrely, that age group hates essays. Not realising my obvious mistake, I found images, formatted and self-edited it. I felt elated, I had done it!

Feeling The Emotion of Publishing

At this point, I decided that selling on Amazon as a private seller wasn’t the best way to get my book seen. I wanted it in bookshops, so I finally Googled ‘how to write a book’. To my genuine surprise, it was possible to self-publish. I got excited. Then overwhelmed. All the articles online revealed that finishing the story was just step 1. I now needed to start thinking about:

I suddenly felt out of my depth. My only comparison would be going for a simple test, and being given a GCSE paper. I was in over my head. There were so many steps and upfront costs, that I felt I should quit before I invested too much and lost.

By this time, I knew quite a bit more about publishing. Not everything (still don’t know that) but I could look at the list and break it down into steps and a plan. I had had long conversations with a company who could help but they were expensive. I decided to try doing it on my own. Failure was possible, but so was success!

I started contacting editors for information, made a list of costs for each step and then devised a timeline around my paydays to work out timescales. It was still scary but looking positive. My biggest concern was all the upfront costs required, however I’d get a huge pay-out when my book launched. Or so I thought…

Royalties – They Can’t Pay for a Royal Lifestyle

I stupidly assumed royalties were higher than they were. Had a painful reality check when I discovered I’d need to sell 500 books to break even. Could I even sell that many?  Trying a new business venture always means hoping you’ll recoup upfront costs, but I literally couldn’t afford to fail. It was too risky, so I reluctantly quit.

At this point, an editor got back to me. She couldn’t take on my work but she directed me to her advice site. In a despondent mood, I started reading through articles to find a way to write without taking a financial hit. I soon found some great advice: view publishing as a hobby, not a career. Cyclists don’t buy bikes to earn money, so publish for fun and if you do make money, great.

That advice helped. Instead of worrying about what I’d lose, I focussed on what I would gain from publishing. I want to write, I want to inspire kids, and I do want to take risks and succeed.

All the editors I'd contacted said they’d like to help, but didn’t have time. However, one made me wonder if an essay for a 3 year old was the right move. Spoiler alert — it wasn’t.

I also started to look at front cover designers. Amazingly, the first person I contacted was gold. She was a partner member of ALLi, and pointed me to the ALLi website which was invaluable. There was so much information that it helped my resolve. I learnt about the different types of editing, and have so much more info for further down the line.

I was given a quote for front cover, design and layout, and will start in two months. She also gave me my first alpha reader who made me realise that kids hate essays. I made many revisions and have now had it edited by an editor from ALLi. There are still more steps to go, but I know I can complete them and that I won’t quit.

I'm already writing book two and have other books in mind. Despite still not knowing everything, I'm heading in the right direction with a passion for writing and publishing. I can’t wait to see my book launch in a few months’ time, and hope it’ll sell loads. Even if it doesn’t, I’m proud of myself for getting this far. I’m giving myself a few years to turn publishing into a viable career, and I am going to do everything I can to make this work.

What did the publishing your first book feel like? If you're still in the process of publishing, are you going through an emotional journey too?

How to Write a Book Proposal to Yourself

Dounia Stewart-McMeel is a believer that children need a passion for learning. Her five years tutoring and volunteering in schools helped children find the fun side of subjects like maths and science, and she is now doing that in book format. Her first book is due to be published in 2020, and will be a fun, non-fiction book (they exist!) about space to help children develop a love of science from an early age.