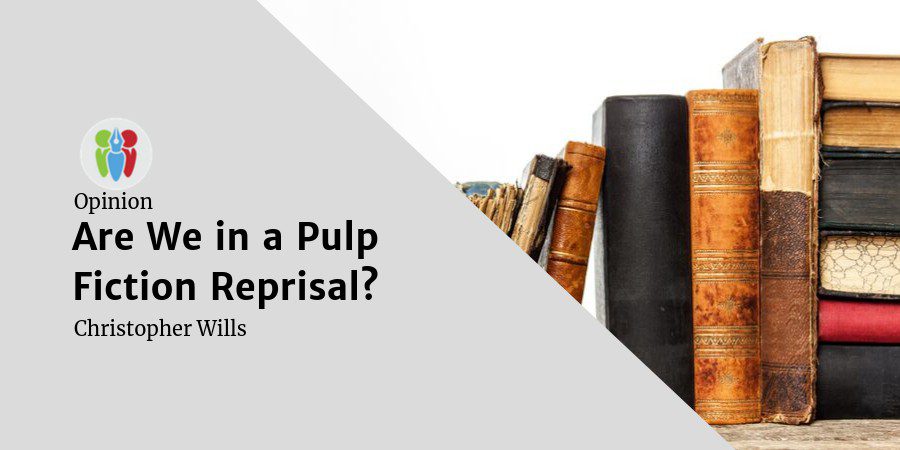 You'd be forgiven for thinking technology has eradicated the days of old. But not so fast, author member Christopher Wills has a different opinion. He's here to examine the similarities between the current ebook era and the early twentieth century pulp fiction era.

Let me start by clarifying that I'm not suggesting ebooks are pulp fiction; I am suggesting the current ebook era has

similarities with the pulp fiction era.

What is Pulp Fiction?

Pulp paper was made from cheap wood pulp which was widely available in the 19th century. Pulp paper is still used today in newspapers, magazines and yes… toilet paper.

In 1896 the fiction magazine, The Argosy, was published on pulp paper with untrimmed edges and no images inside or on the cover. It was eight pages of serialized fiction. Within ten years it was a weekly magazine selling 500,000 copies every issue.

The pulp fiction era is considered to have been between 1896 and 1939, although if one includes cheap paperback books printed after the war, one could suggest the era continued until the 1950s. Paper shortages during the Second World War brought a decline in magazine sales and after 1945, new paperback publishers, comic books and television helped continue the decline in pulp magazines.

In 2004, Sony released the Librie in Japan which is acknowledged to be the first ebook reader with an electronic ink display.

However the ebook era probably started in 2007 with Amazon’s issue of their first ebook reader, the Kindle. The name came from the idea of kindle as fuel to start a fire, so the Kindle was a metaphor for fuelling the love of reading. Wood kindle is like wood pulp – spooky. The first Kindle sold out in 5 hours.

The ebook was possibly invented in 1949 although that was a mechanical device so maybe it should be called an m-book. Another version of an ebook was invented in the 1960s but that was based on an IBM mainframe computer so it wasn’t very portable.

So what are the comparisons between the pulp fiction era and the current ebook era?

Some pulp fiction writers were writing huge numbers of words per day; some wrote up to 8,000 words. Imagine writing 8,000 words on a typewriter every day. That must have been before RSI was invented! Today many ebook writers write a few thousand words every day and some “write” even more using voice to text technology.

This is a bit more productive than the famous quote attributed to traditional authors such as Flaubert, Wilde and Conrad:

“I spent all morning putting in a comma and all afternoon taking it out.”

During the pulp fiction era writers were paid on acceptance for magazine stories and the rates of payment were agreed in advance. This transparency and speed of payment helped with the payment of bills. Today one advantage ebook authors have over traditional writers is the quick payment of money for sales and the transparency of the amount of money earned.

What About Genre Fiction?

But one might ask, hasn’t this always been true of books?

No. Go to your bookshelf, or your parents’ bookshelf or a library bookshelf and look at the covers of some older paperback books in some genres. Some are amazing and well designed, but many are not. I looked up ‘James Bond book cover art' and discovered a variety of styles. Some paperback James Bond books had no images on the cover at all; they only had text stating the title and writer.

Book covers have always been designed but only in the last thirty years or so have some traditional book covers started to conform to genre styles. Think Chicklit or Mislit. Some genres like Science Fiction and Westerns have always had a genre style image on the cover.

During the pulp fiction era new genres were created and these genres became established as part of the fiction canon. A couple of examples are Science Fiction and Hard Boiled Detective stories. Today in the ebook era many new genres and sub-genres have been created and have become established such as Paranormal Romance and Military Science Fiction.

So there are similarities between the pulp fiction era and the current ebook era. Some may have concerns that comparisons between the two eras could introduce the idea of ebooks being labelled as pulp fiction.

Let’s examine this briefly. Many great writers wrote stories for pulp fiction magazines to supplement their incomes and as part of learning their craft. These include:

Personally I would not consider it an insult if my name was associated with those writers. What do you think?

Do you think we're having a pulp fiction renaissance? Or do you think this is a different era all together?

Encore Opinion: Why Author Income Should Be A Measure of Publishing Success

Christopher has been a soldier, sailor, teacher, trainer and is now a storyteller. He has an MA in Creative and Critical Writing from the University of Winchester and is a Tony Buzan Licensed Instructor in Mind Mapping. In 2019 Christopher is publishing a 3 book Military SciFi series and a non-fiction book to help writers. He has a website at www.crwills.com