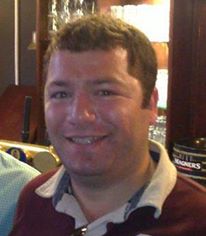 Opinion: A First-Timer’s View of the London Book Fair 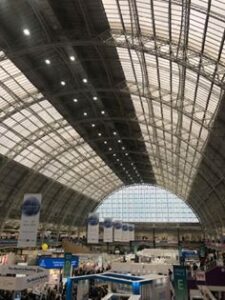 A daunting sight for a first-timer to LBF (Photo: Rohan Quine)

ALLi members from far and wide gathered at the London Book Fair last week, where its stand was by far the liveliest in the Authors Hub. It was a pleasure to welcome old friends and new, and, at the end of the final day, to celebrate ALLi's seventh birthday.

In today's post, we're delighted to share the first impressions of a newcomer to LBF, ALLi Associate member Steve Shahbazian. Steve Shahbazian joined ALLi in September and began his indie author adventure in January after far too many years spent working in the NHS. The London Book Fair was his first foray into the exciting world of self-publishing. We're looking forward to sharing his journey!

Have a clear goal, plan out your visit, know what you want to get from the event in advance…

I read the ALLi advice on how to get the best from the London Book Fair and thought, “Holy crap, I haven’t done any of that.” Instead, I turned up having registered the day before with little thought what I would do when I got there.

Having got off to an inauspicious start, I was pleasantly surprised to see none of the huge queues I had imagined would be there. Even so, finding myself in a venue the size of St Pancras International (a mainline railway station in central London) filled with the book industry in its entirety was overwhelming stuff, although it was truly heartening to see that books are in good health.

I wandered around, floorplan, compass and emergency rations in hand in order to orientate myself. Unfortunately, the first thing I saw was a book stand, which was like a hardened addict chancing upon a den of heroin. Then I saw the prices! I had practically rolled my sleeves up and started injecting when I was informed the books were for display only and not for book-obsessed rookie authors. Realising that paying £45 for a chance to pick up bargains was a perverse reason for attending, I prised myself away and resumed my travels. Publishers, wholesalers, retailers, printers, countries from Indonesia to Kazakhstan, the range of stands was bewildering. It was like several events rolled into one.

A Sense of Perspective 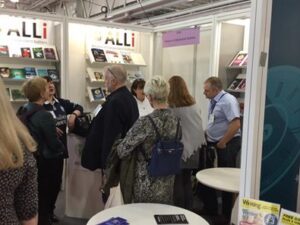 The ALLi stand in the Author Hub offered a warm welcome to all (Photo: Julie Cordiner)

Having gained a sense of the scale, I returned to the Authors Hub, where I was stopped by a woman in a state of excitement.

“Did you see the Margaret Atwood protests?”

I realised from her expression I might have made a slight faux pas.

“It was a mock protest,” she said, “To promote her new book.”

She gave me a disparaging look and made a rapid exit.

Thinking that remaining silent might henceforth be the best policy, I sat down for the first of many talks.

Publicity, branding, editing, copyright, industry trends, platforms, plus the must-see ALLi talks on successful self-publishing and getting books into bookshops, there was essential learning in every one.

Being new, I was not at the stage where I would feel ready to approach bookshops – I generally make it my policy to learn how to run before I fall over – but knowing in advance what was involved meant I would be prepared for when that moment comes. Now armed with Debbie Young’s book, I am certain I won’t fall over.

Most of all, what struck me was how friendly the event was.

Huge, yes, but highly personable. Even though I had turned up on my own, not knowing a soul, I found myself talking to other authors, editors, businesspeople and a lady who unexpectedly began asking me questions she already knew the answers to. I’m not a big fan of the term “networking,” which somehow seems to take the personality out of meeting people, and I hadn’t gone with the intention of meeting anybody in particular – I didn’t even know if I would meet anyone at all – but I bumped into a wonderful children’s author, who immediately resolved two birthday present conundrums, and got to meet Orna Ross and Joanna Penn.

For me, this was the highlight of the event. I decided to become an indie author last year with only the vaguest idea what was involved. Joining ALLi was my first step and, for newbies like me, the support and warmth is a godsend. Orna made all this possible, so to say hello was unbelievable. She gave me an ALLi badge and I don’t know how to say this: I don’t wear badges, I just don’t, but I wore that badge every day and I felt so proud.

Like for so many, my first book on self-publishing was by Joanna Penn. I couldn’t have asked for a better introduction and, although she had no idea of it, she quickly became my go-to person, making self-publishing seem straightforward and holding my hand through the process.

What at first seemed like one of those army assault course walls you run up, crash into and slither down into a heap turned into a staircase I could ascend one step at a time until I reached the top [err, thinking about it, I’m going bring this metaphor to a swift halt – metaphors involving “holding hands” and “going up stairs” are liable to misconstrued and I don’t want to die before I get published!]

Result: A Sense of Belonging

On reflection, I realised I did have a goal. It wasn’t a formal objective, like aiming to pitch to someone, but a desire to get involved and feel part of the indie author community. I got the chance to meet people, learn from the talks, speak to the professionals and ask the questions I wouldn’t have thought of had I stayed at home.

Having been there for the first time, my advice would be: go – don’t let not knowing anyone hold you back. Speak to people. Be open to new opportunities. Do as much or as little as you feel comfortable with. Take breaks. And most of all, have fun.

#Indieauthors - wondering whether events like the @LondonBookFair are for you? Read Steve Shahbazian's entertaining report on his impressions of his first LBF here: Click To Tweet

Book Marketing: A Case Study of the Benefits of Reading in Public – at Novel London

Steve Shahbazian’s novel Green and Pleasant Land is due out sometime this decade. Or possibly the next. His website www.steveshahbazian will be finished when he finally pulls his finger out and does it.