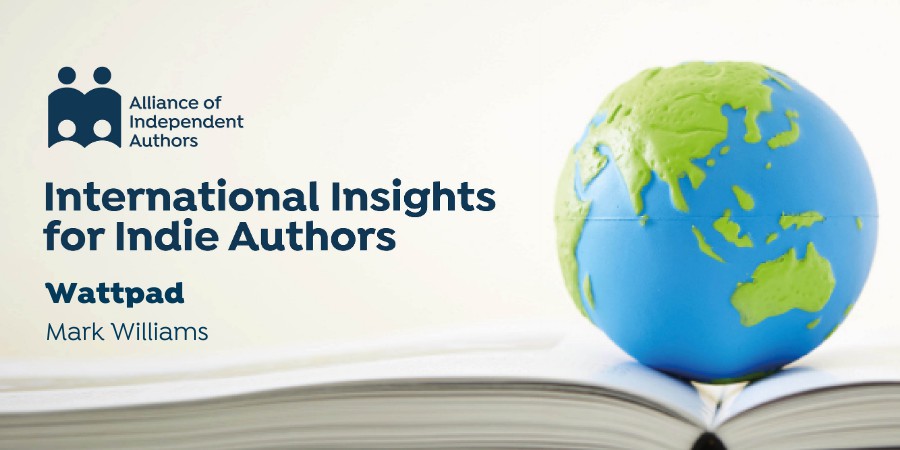 For this week’s edition of the Alliance of Independent Authors International Insights hosted by Mark Williams of The New Publishing Standard, we’re discussing Wattpad.

Starting October 26 through November 20, writers in India can submit entries for the second annual Wattpad India awards. The shortlist will be announced on December 10 and the winners on December 24.

First that the global publishing calendar doesn’t stand still for our western holidays, and if we are serious about going global we need to keep that in mind. Christmas, Easter, Thanksgiving… In much of the world these are just another working (and book-buying) day.

Second that there are many international platforms out there we are probably aware of but possibly haven’t taken seriously or looked at many years back and have not revisited, that might present opportunities to reach new audience and build new revenue streams.

Take Wattpad, for instance. We've probably all heard of it, and some of us may have started out on it way back in the early days of our careers, but then we grew out of it and moved on to bigger things, where we had some chance of getting paid for our work. Wattpad after all is just a free-reading site for early-teen girls to binge on vampire love stories written by wannabe authors who aren’t quite ready to publish properly, right?

Well, like any urban myth there’s an element of truth tucked away there, and in its earliest days no doubt a lot of truth in that summary. But if that’s how we think of Wattpad today then we really need to think again. It’s almost 2021, and Wattpad is no new kid on the block. Soft launched in 2006, Wattpad became a public place in 2007, the same year the Kindle store launched in the US. And like the Kindle store, Wattpad in 2020 is a very different animal from the early days incarnation we probably think of when the name Wattpad crops up in writing circles.

Wattpad started out with public domain material just to have something to attract readers, and of course wannabe writers soon piled onto the platform to get audience feedback on their work.

By 2011, the year the Kindle launched in the UK (and still unavailable elsewhere apart from the US), Wattpad notched up its first 1 million users. It was also the year Beth Reekles started writing a story chapter by chapter on Wattpad called The Kissing Booth. Just one of an untold number of authors throwing work onto Wattpad for no reward other than reader feedback.

What a muppet! She should have waited until it was finished and stuck it on Amazon, right? She might have earned a few bucks that way. But hold on, in 2018 Beth’s The Kissing Booth became a Netflix Original.

Yeah, bear that in mind as we explore further what Wattpad has to offer the internationalist author willing to step outside the Amazon box.

In 2014 Wattpad was seeing one billion minutes per month of user activity and publishers started to pay attention. The most-read book on Wattpad that year was After, by unknown wannabe author Anna Todd. The story was snapped up by a publisher and became a New York Times bestseller and later a film. After is still on Wattpad today and has accumulated – you might want to be sitting down for this – 665 million reads.

Hast-forward to 2020 and Wattpad is… Well, where do we start? Wattpad 2020 is barely recognisable compared to that early days outline mentioned above. Remember how Wattpad hit its first one million registered users in 2011? Today it’s 90 million users every month.

So what’s all this about Tap and Wattpad Studios, etc, etc?

Let’s start with Tap, the Wattpad app launched in 2017 that currently fields over 350,000 interactive stories. But that’s just part of it. Tap is also a platform for games developers on Twine to put their games on Tap and get meaningful data back.

A run through recent Wattpad press releases is perhaps the best way to illustrate the breadth of Wattpad in 2020.

In September, Wattpad told us about Float, a new film being produced by Wattpad Studios (yes, Wattpad has its own film and TV arm!) and Collective Pictures, after Kate Marchant’s Wattpad series accumulated 25.5 million reads.

The first two books, which attracted 45 million and 48 million reads on Wattpad, were published in September. Two more titles will be published this month (November), and one of those accumulated 68 million reads.

Also in August came the news from Germany that a Wattpad series had been picked up by Constantin Film and JB Pictures Set. Perfect Addiction by Claudia Tan hasd accumulated 81 million reads and was a winner in the annual Wattys Awards (yes, Wattpad has its own awards too).

Remember Beth Reekles, mentioned above? Back when The Kissing Booth was picked up by a publisher Wattpad was still finding it way. Nowadays Wattpad has its own publishing arm, Wattpad Books, and uses its insider information about reader interest to cherry-pick not just the most successful books but also the up-and-coming hits. Reekles’ latest book, a topical quarantine-romance titled Lockdown on London Lane began in April and picked up 329,000 reads in the few months since before Wattpad Books snapped it up.

In June, news came from Australia that Wattpad had partnered with Screen Queensland to “bring data-backed insights to Australia’s entertainment industry.

From the press release: “In a first for Australian entertainment, the companies will use Wattpad’s Story DNA Machine Learning Technology to identify stand-out stories for development as TV and film projects.”

In May, Wattpad Studios announced today it was developing film versions of two hit Wattpad stories as part of a “new initiative that will see Wattpad finance early development for select TV and film projects. Wattpad’s Development Fund is the company’s latest move to verticalise its business, using data-backed insights to uncover incredible stories and trends that can be adapted for TV, film, and published via Wattpad Books.”

I’m going to have to stop at May 2020 or this will go on forever, but this should give us all some new insights into what the once-upon-a-time wannabe-writers testing place has been transformed into, and why anyone serious about going global should be serious about Wattpad. More Wattpad news going back over the years can be found on the Wattpad blog.

Just to add here that in May 2020, Wattpad had “almost 50 TV and film projects in development with studios around the world,” and that “Wattpad’s entertainment partnerships and projects span the US, Canada, Brazil, France, Italy, Germany, Singapore, Indonesia, South Korea and the Philippines. To date, nearly 1,000 Wattpad stories have been adapted for TV or film, and published as books.“

Let me just wind up this essay by noting that while Wattpad is still a free to read site there are paid options for readers and there are ways authors can make money directly on Wattpad. Check out Wattpad Premium and Wattpad Paid Stories – just two more Wattpad assets many indie authors are likely unfamiliar with.

No room here to advise on how best to approach Wattpad – that’s for another post. Here just to say, spend some time getting to know the Wattpad site, look at what is attracting readers, and keep expectations realistic. If we are new names on Wattpad then we should expect to take time to gain traction and attention.

But equally, if we are well-established authors in our home markets, why not consider putting titles out on Wattpad to reach these global audiences beyond our retail reach and build out our brands for the future?

A reminder, Wattpad attracts 90 million users per month, and many of these will be in countries or regions where we have little or no traction. India, Latin America, Singapore, Indonesia, South Korea and the Philippines as examples. By the way, the Philippines has had its own Wattpad TV show, Wattpad Presents, since 2014!

Wattpad. Because the global book market is so much bigger than we think.