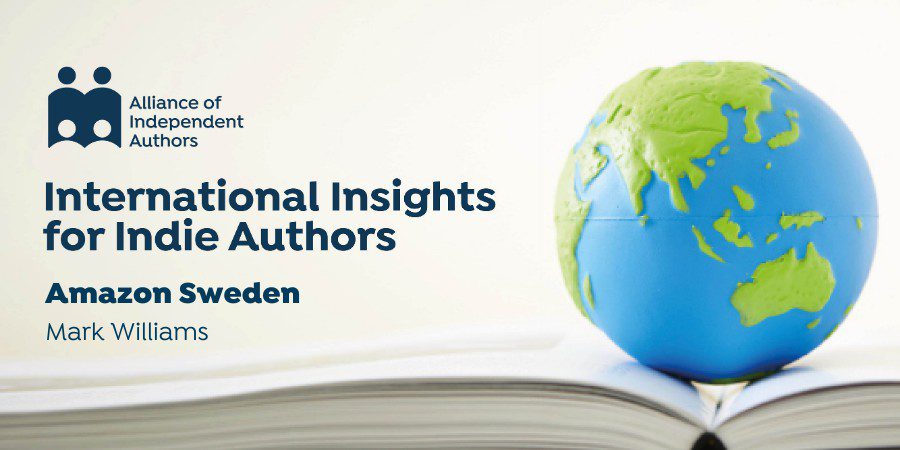 For this week’s edition of the Alliance of Independent Authors International Insights hosted by Mark Williams of The New Publishing Standard, we're discussing Amazon Sweden.

One of the keys to being a successful international indie author is keeping abreast of global developments in publishing, watching trends, spotting opportunities, and being able to pivot when needed.

Only a few years ago just a handful of high-flying indies gave a second thought to the audiobook market. Today most serious indies are pivoting towards a multi-format model where audiobooks play a central role in their author platform.

We can say the same about podcasts and print on demand. Neither are new to the publishing scene, but both have become more and more central to indie publishing in recent years, and authors who pivoted early, away from the “ebooks are the only show in town” mindset, have emerged the stronger for it.

It’s the same with going wide and going global.

Lots of indies pay lip service to going wide, but there’s much more to going wide than walking away from KDP Select and signing up with the first aggregator that springs to mind.

If we are serious about global reach we need to keep up with new developments and constantly revisit our list as new platforms and opportunities emerge.

Although sometimes an exciting new opportunity can turn out to be a damp squib. Like the launch this week of Amazon Sweden, which is a lesson for all about keeping all our eggs in one basket.

Because Amazon Sweden, Amazon’s 17th market, has gone live without a Kindle store. Again. In fact come November 11 it will have been 6 years since Amazon last launched a Kindle store.

This despite the fact that Amazon continues to state clearly on its website that Amazon’s goal is,

“To have every book, ever published, in any language available for Kindle customers to purchase and begin reading in less than 60 seconds.”

Great sentiments that will no doubt have helped many indies over the years decide being exclusive with Amazon was a good bet for the long-term.

But there’s the reality: the last Kindle store, in the Netherlands, launched in November 2014. Since then Amazon has launched in:

Does anyone detect a pattern emerging here?

Which means that since 2014 indie authors who chose to be exclusive with Amazon have not seen any new international opportunities come their way, while indies going wide have reaped the rewards of an expanding global market. And just to ram home the apparent indifference of Amazon to the global book markets in the 2020s, consider this:

This is not a problem with language-compatible tech. In fact, Swedish publishers have been sending books to Amazon US for years. But readers in Sweden visiting the spanking new Amazon Sweden store will only see printed books and audio-CDs.

Yeah, someone send a memo to Jeff Bezos and tell him it’s 2020. Even in Sweden.

But what makes this story of Amazon’s launch in Sweden without digital books all the more incredible is that Sweden, more than any other country in the world, is at the forefront of the digital transition. As much as 60% of the Swedish book market is now digital, with digital subscription of ebooks and audiobooks leading the way.

In fact it’s only Christmas print sales that are holding Sweden back from the tipping point at which printed books become to Swedish publishers what vinyl is to music publishers in the US. Let’s bring in some supporting facts and figures to drive home just how significant the absence of a Kindle SE store is.

This month Sweden-based digital books streaming service Nextory reported its Q3 figures, which were pretty much the same as every other quarter in living memory: Revenue up 76%. Subscribers up 81%. It wasn’t just Nextory. Sweden-based ebooks and audiobooks BookBeat saw a 69% revenue boost in Q3 (following an 82% rise in Q2).

And then there’s Storytel. Sweden-based, of course, and for Q3 reporting a seemingly less impressive 23% rise in revenue, but this from a much higher base as the market leader. And most importantly Storytel’s non-Nordic growth (i.e. growth in markets not including Sweden, Denmark, Finland, Norway and Iceland – markets like India, Poland, Netherlands, Singapore, Brazil, Mexico, Colombia, South Korea, Russia, Turkey Bulgaria, UAE, Italy and Spain) was up 65% YOY for revenue and 63% YOY for subscribers.

That growth won’t include Belgium as the Storytel Belgium store just launched this week. But pause a minute to check how many of those Storytel countries have a Kindle store. Just seven, since you ask. And Storytel will also be launching in Thailand this year, and Indonesia and Israel in early 2021 (none of these have Kindle stores), followed by another 18 or so new markets through to 2023.

Nextory has similar ambitions. It has just announced a Netherlands launch for December and is looking for capital for further expansion beyond its current markets.

Of course Storytel, Bookbeat and Nextory are some of countless streaming services reaching global audiences but that off-limits to authors who go exclusive with Amazon.

Over at the Hot Sheet this week Jane Friedman took a deep dive into the Frankfurt Book Fair debate on subscription.

And stepping outside the digital books box, Netflix has launched a new low-price mobile-only subscription option in Nigeria to tap into the country’s 126 million internet users. And yes that is the Nigeria where the Amazon Kindle store, the Google Play books store and the Apple Book store are blocked.

But let me wind up the subscription element of today’s post by noting that in Norway authors are taking legal action against publishers to ensure their books are on more subscription platforms.

Of course there’s more to indie publishing opportunities than subscription. Book fairs and festivals continue to head online as the pandemic ravages the globe. And markets we might usually overlook are seeing lots of new developments. It would be impossible to mention all the exciting news in global publishing this month, but here are a couple of appetizers to round off this post.

The Malta Book Festival will be online this year. Typically 40,000 turn out for the event. Not bad for an island of fewer than 435,000 people.

In Malaysia Big Bad Wolf is at it again. Big Bad Wolf Malaysia will be an online sale with 20 million English-language books up for grabs. Malaysia has 27 million people online.

And in Palestine the Palestine Writes Literature Festival will be online in December.

Then of course there’s Brazil, where the São Paulo Bienial will be having an online version in December.

And staying in Latin America, Mexico’s Guadalajara International Book Fair will be online this year too. Guadalajara typically attracts upwards of 800,000 visitors.

If we’re serious about building global audiences then these online book fairs are great opportunities to engage via social media.

In other news, in Pakistan a major new publishing house launched, and while there’s no indie opportunity with the company, it’s reminder of one of the most exciting untapped markets out there. Pakistan is at just 32% internet penetration, so no surprise indies aren’t thinking about the digital sales opportunity here, but hold on. That 32% equates to 71 million people online already – that’s more than in the UK – and enormous room for growth.

And speaking of room for growth, France has been very slow to engage with digital despite having 60 million people online, with just 8.7% of the French book market being ebooks and digital audio. The only way is up!

French-language aggregator De Marque, based in Canada, has just raised $5 million for expansion after the 35% boom in digital reading during lockdown became a 35%-30% sustained increase.

In Africa, the reading app Nabu has launched in Kenya in both English and Kiswahili. One more reminder that the global book market is a digital playground for indies willing to step outside our comfort zones.

And to round off this post, a return to subscription, but this tie regarding podcasting. Most indies use podcasts to drive traffic to revenue platforms, but there are opportunities to make money direct from our podcasts. One such is Voxnest’s Spreaker, which is in the news this month because it’s been acquired by the biggest US podcasting operator iHeartMedia. Spreaker is one of the podcasting players that offers podcasters a chance to earn directly  from their podcasts

Wherever we are, in a big city, a small town, a remote village, or on a distant island, the global book market is just a click away. And it’s soooo much bigger than we think.