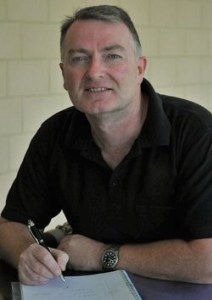 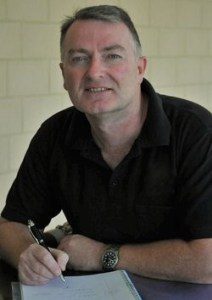 Based in Australia, Ian Hooper writes fiction under the pen name Ian Andrew

From Australia, ALLi Partner member Ian Hooper,  who also writes under the pen name Ian Andrew, describes how he built up an excellent relationship with a bricks-and-mortar bookstore, in an inspiring tale that reminds self-published authors everywhere never to neglect small local indie bookstores for the sake of big chains.

Yes it’s true. Utterly true. So true that I considered getting T-shirts printed to celebrate.

I was the No.1 bestselling adult crime fiction writer of 2015.

On the back of the shirt, in small letters, will be the caveat. “In one bookshop, in one town, in Australia…”

Yeah, I know… it rather takes the shine off it doesn’t it? But the fact remains.

A Tale of Three Bookshops

Thing is, the shop in question is in a small, but busy, tourist town which has three bookshops. One is a national chain, one is prominent on the main street and one is tucked away up a discreet, yet vibrant, little shopping ‘lane’.

Back in early 2015 I had two titles on release and decided I would try to get them stocked in this nearby tourist haven. I dismissed the national chain as ‘too hard’.

Instead, I approached the best-situated shop. It was a mix of traditional bookshop and tourist ware, all the better to attract the passing trade, I thought.

They were more than happy to take both of my titles (on consignment, naturally) and I went home feeling pleased.

Six months later, in early October 2015, they had sold one of one and two of the other. I was saddened.

Then a friend asked if I had tried the other bookshop in ‘the lane’. I dropped in and offered them my two titles. They were received by a suitably smiling staff member, but I was told that they wouldn’t be accepting them straight away. Rather, they said they’d read them and get back to me. I went home and waited.

Two weeks later I rang to check on progress. I was told, ‘Sorry, haven’t had a chance to read them yet.’ I figured they probably never would. Ah well…

Two weeks after that, the owner phoned me. She and her husband had read both my books and loved them.

They’d be happy to stock them. So happy, that their initial order was twice that of any other shop I had been stocked in.

I delivered the first batch myself and struck up a long and wandering conversation with the owners. They learnt about me, I learnt about them.

So it was, that within the last quarter of 2015 they went on to sell so many of my novels that I outsold every other author on their shelves, including Galbraith, Connolly, Child and the rest. I not only caught up with their year-to-date totals, but surpassed them. I was thrilled, but also slightly confused.

What on earth had happened and why was there such a disparity with the first shop?

The Secret of my Success

On reflection, the answer was simple enough…

The shop on the main street sold books. As a commodity. Like tourist gifts and greeting cards. The product sat on a shelf and waited to be chosen. That works. Of course it does. If you are a known name.

The second shop is owned and staffed by bibliophiles, book lovers, book readers, book geeks. Lovely ones, but definitely book geeks. They know their trade and they know their stock and above all, they know their customers. So when one of their regulars who liked crime fiction came in and asked, ‘Anything new worth reading?’ they were directed to my book. When the head of the local book club came in, the same thing happened with resultant sales of twenty copies. When tourists and passing trade came in, conversations were struck up, likes and dislikes discovered and if it fitted, my book was recommended.

The owners and I also kept in touch. Not regularly, but I would drop in every couple of months. They helped me understand book trade nuances and I kept them updated on the progress of my next novel. They offered to host the launch, (which they did in 2016) and still the sales kept coming. 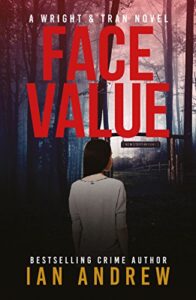 Now, two and a half years later they will host another event next Sunday. A ticketed event with nibbles and champagne and me, alongside a mainstream children’s author whose first book deal has gone global and another traditionally published author who has a pedigree of prestigious award wins behind her. Each of us is being treated on an equal footing, each valued by bookstore staff that know their customers, know their books and know their authors. Because of that, they do good business.

In comparison, that first store in the same town, couldn’t get my penname correct when they contacted me.

So, indie authors, seek out your indie bookstores. Embrace them and garner a relationship with them, for you are your own publishing representative and bookshops that are staffed by book people, want to have that personal contact.

Now, what colour shall I get that t-Shirt printed in?

OVER TO YOU How’s your relationship with your local indie bookstore? We’d love to hear any tips you having for getting your self-published books stocked in shops.

OTHER INSPIRING POSTS ABOUT BOOKSTORES

Why I Love Bookshops (#Authors4Bookstores)

Ian Hooper writes under the penname Ian Andrew and is the author of ‘A Time To Every Purpose’ and the ‘Wright & Tran’ series of thrillers. His author website is www.ianandrewauthor.com.