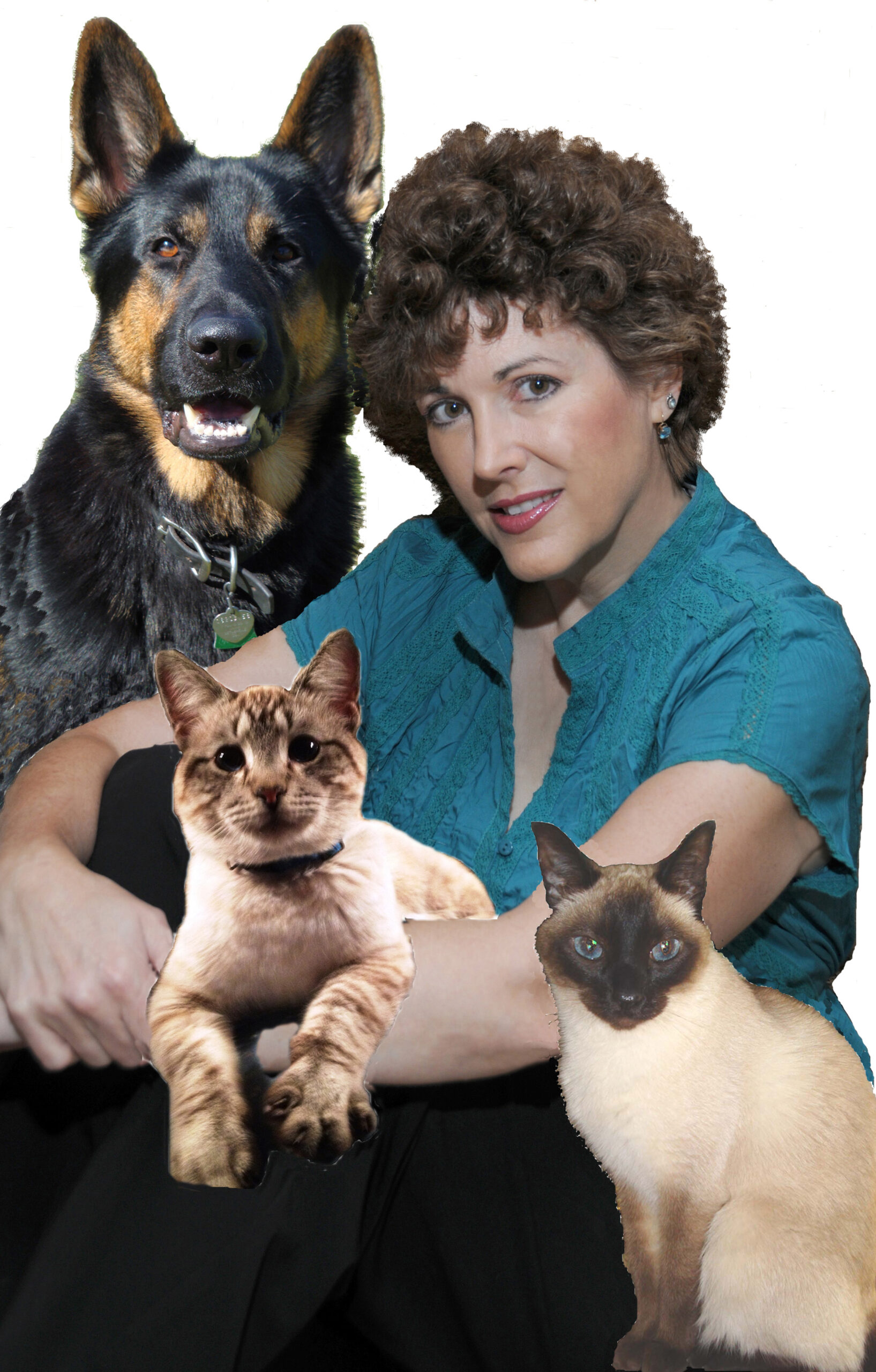 How I Do It: Indie Authors Share the Secrets of their Success – This Week: Amy Shojai 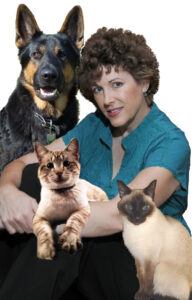 We're thrilled to be featuring in our mini-masterclass slot an author of both fiction and non-fiction writer who is also a hybrid author (ie both trade- and self-published). Although US author Amy Shojai has written some novels, most of her books have been about pet care and animal behaviour, giving us the perfect excuse to feature cat photos in our blog today! 😉

1. What’s the secret of your success?

It's very simple, really, and not a secret at all. I just stopped talking and started doing. I show up every single day for work, keep my promises (to clients and to myself!), and strive to over-deliver. Just think about that in your own day-to-day dealings with other professionals and businesses, and consider how often promises aren't kept, deadlines missed, and services less than satisfactory.

Just doing the basics – show up, deliver what's promised (in terms of the story or the how-to advice or fill-in-the-blank) and you'll outshine 99% of those in your profession.

And yes, this is my profession, not a hobby. It's fine to love what you do (that's what “amateur” means, after all, to do it for the love of the doing…), but just because someone has yet to reach a monetary goal with writing is no excuse for being sloppy.

2. What’s the single best thing you ever did?

I “owned” being a writer. It took me many years to say it out loud and believe I was worthy of the title, or that my particular “pet” niche was worthy of respect in the world of publishing.

There's something incredibly liberating about finding what you are meant to do in this world, and jumping off that cliff and discovering it's given you wings.

Once that happens, that nugget of truth sustains you during the hard times (oh, it's still hard work!) Had I not known who and what I am, and my purpose in this world, I would have given up writing long ago.

3. Did you get lucky? What happened?

Of course I got lucky! But the best overnight success stories always come from years and years of work in the trenches. 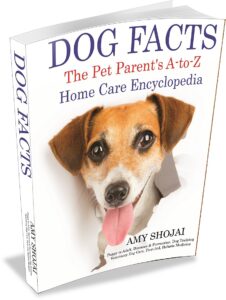 I've always been a voracious reader, and as a kid started at the “A” shelf of the novel section in the library and read my way through to the “Z.” My favorite stories then (and now!) feature animals. But I never planned to be a writer. Then as a newlywed, when we moved to a tiny coal-mining town in Eastern Kentucky that had no TV reception, a very tiny library, and very few jobs, I finally found a job at a new veterinary hospital. My interview took place during a chihuahua's C-section, with the doctor asking me questions as he handed me puppies to resuscitate. Many funny, strange, heartbreaking, and uplifting experiences followed, and I shared stories with family and friends. My mom told me I should write them down. Having read most of the books in the local library, and with no TV worth watching, I wrote pet-centric fiction and nonfiction for my own entertainment. Many of these short pieces became personal experience articles sold to the “pet press.”

And here's where luck swooped down and sprinkled me with glittery publishing magic.

Two of my cat articles appeared in the same December magazine issue that a New York editor happened to read. She tracked me down from the bio-note (ALWAYS include a bio-note!), and offered me my first non-fiction cat book contract, and a few months later, a second one for a dog version. The books were published by Bantam/Doubleday/Dell, and in hardback and trade, sold over 100,000 copies. That led to me being signed with a high power agent, and we sold many high profile pet care books together, until publishing changed, and we went our separate ways.

That's when you question if you should shut off the laptop for good – I was tempted.

Before we parted amicably, my agent (I still adore her!) got my rights reverted to my extensive backlist, which positioned me to reinvent myself, release updated books independently and even publish original titles.

4. How do you get/stay in creative mode? 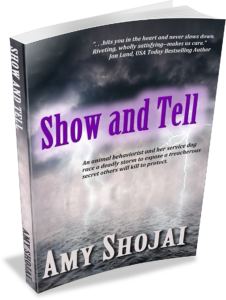 Oh heavens, you mean there's an off-switch to creative mode? I haven't found it!

I wrote non-fiction short work and book length (thirty books and counting!) for so long, that creativity well never runs dry. I'm late to what I call “fiction-ing”, and it does take more effort to push through first drafts, but I have yet to run out of ideas. I actually feel resentful when it's time to go to bed, because I'd rather keep working and writing. Of course, since both my non-fiction and thriller writing incorporate cats and dogs, my own pets offer endless inspiration.

That's actually how my thriller series was born: I had to write the book I'd always wanted to read, involving animals but without the “talking pets” angle.

I wanted them to be true to what I know from my behaviorist background. Therefore, my main character named September is an animal behaviorist and dog trainer, and her German Shepherd service dog Shadow has his own viewpoint chapters (but he doesn't talk).

5. How do you prioritise? 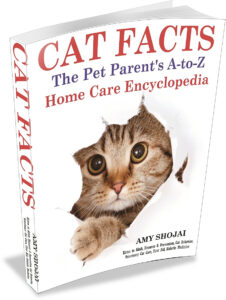 I need help with prioritizing! With so many projects nipping at my heels, it's difficult sometimes to know which one should take focus. I work best when I have deadlines, and love to-do lists so that I can cross off each task. Today, I must wear my business hat, and push the income-generating projects to the front of the list. As a hybrid author, some of that is speculative. Heck, not even the big-whammy New York editors and publishers have reliable crystal balls for predicting the best choices. So the projects that really get my virtual tail wagging and purr rumbling also go to the top of the list. If I'm not excited, then my readers won't be, either.

I write the books that I want to read.

I'm writing a novella – my first! I was invited by the awesome Toby Neal to contribute to her Lei Crime KindleWorlds, and so my novella features one of Toby's favorite characters, a Rottweiler dog named Keiki. Just as Shadow does in my own series, Keiki has her own viewpoint chapters, but in my novella she's a puppy before she becomes a police dog. It's great fun! After that, I'll write the fourth book in my September Day series. And I have some other novellas and short nonfiction work in mind, as well as putting together some on-demand pet behavior courses. Oh, and co-writing the next musical theater production. There just are not enough hours in the day!

7. What’s your top tip for other indie authors?

Show up. Keep your promises, especially to yourself. Celebrate your mistakes, because you'll learn from them and move one step closer to success. When you train dogs or cats (or kids or anyone else),  if you only say NO! to every behavior offered, eventually the pet shuts down and refuses to move at all. Fear prevents learning. Only when you say YES! (even if it's a single paw-step in the right direction) will emotion turn positive, confidence increase, experimentation and learning blossom.

So in your writing life, stop listening to NO, and start saying YES.

Amy Shojai, CABC is a certified animal behavior consultant, author of more than thirty pet care books and the September Day pet-centric thriller series. She's been featured as an expert in hundreds of print venues including The Wall Street Journal, New York Times, Reader’s Digest, and Family Circle, as well as national radio and television networks such as CNN, Animal Planet’s DOGS 101 and CATS 101. A self confessed workaholic, Amy recently released her third thriller Show and Tell, as well as two 550+ page encyclopedias Dog Facts and Cat Facts in less than four months. She rarely sleeps.