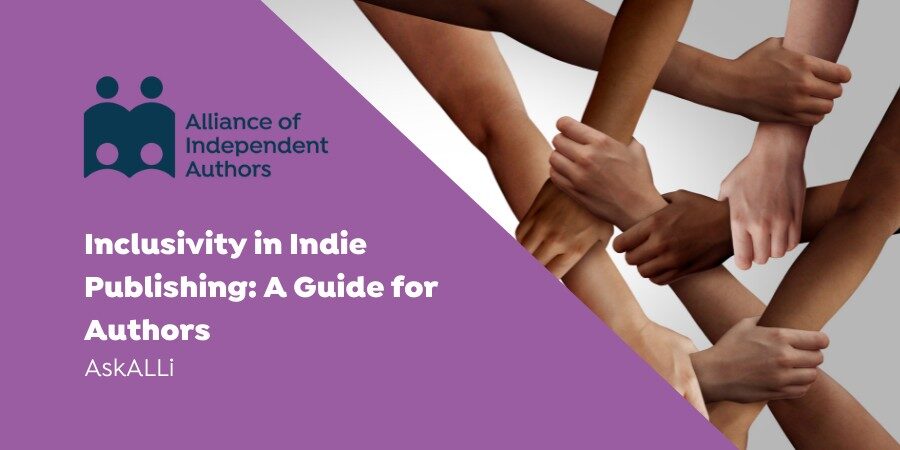 The lack of diversity and inclusivity in publishing is a problem. It’s an unfortunate truth, but racism, discrimination, ableism and prejudice still tarnish the industry. Today, the Alliance of Independent Author’s AskALLi team alongside Eliana West and Crystal Swain Bates look at some of the issues in the industry, and common mistakes author-publishers can make, as well as how good self-publishing is the most empowering pathway to diversity and inclusivity in publishing.

Diversity and Inclusivity in Publishing: Statistics

In 2014, the We Need Diverse Books campaign launched, to promote diversity and inclusivity in publishing and campaigning for change. Lee and Low Books reported on the Where is Diversity in Publishing? survey:

“The 2015 survey reported that overall, 79 percent of people who work in publishing self-report as White. Given the sample size difference, this [the 2019 updated survey’s] 3 percent change in White employees does not meet the bar for statistically significant change. There is no discernible change to any of the other racial categories. In other words, the field is just as White today as it was four years ago.”

But it’s not just racial diversity that’s lacking. A CCBC 2017 Statistics on LGBTQ+ Literature for Children & Teens reported that out of 3700 books examined, only:

“136 (3.68%) had significant LGBTQ+ content. Of these, 56 (41.18%) were written by an author who identifies as LGBTQ+. This does not necessarily mean that the author’s identity aligns with that of the character, e.g. a cisgender bisexual woman could create a transgender lesbian character.”

There’s a similar story for disability and other marginalized backgrounds.

Despite this, there’s been a plethora of changes, campaigns and active work towards improving publishing, in particular in the children’s book arena.

A Lee and Low blog reports:

“Starting in 2014, the number of diverse books being published increased substantially. And in 2016, the number jumped to 28%. This year shows that number is steadily increasing, hitting 31% – now the highest year on record since 1994.”

Discrimination and Racism in Current Publishing

While the number of diverse books is increasing, the number of books written by people of color still has not kept pace. At just 7% of published books, there’s a long way to go.

Of the 3299 books the CCBC received in 2020 (a considerable amount less than normal due to pandemic issues), 400 were about Black/African people, 52 about Indigenous people, 317 about Asian people, 200 about Latinx, 5 about Pacific Islanders and 27 about Arab people. This is an increase from 10% in 2018 to 12% in 2020. This data on books by and about Black, Indigenous and People of Color published for children and teens compiled by the Cooperative Children’s Book Center, School of Education, University of Wisconsin-Madison. For more data, view their statistics here.

As the statistics show, there’s still a significant representation issue let alone the equality of pay which we’ll cover in a moment. The fact is, there are traditional books being published that are rife with racism. So much so, readers are now picking up on the issues. Kate Clanchy published Some Kids I Taught and What They Taught Me in April 2019. Shockingly Clanchy was nominated for the Orwell Prize for Political Writing (2020). But earlier this summer, a reader pointed out the prolific number of issues in a Goodreads review. This sparked backlash from Clanchy which led to a public backlash. The BBC reports Clanchy has since apologized and is rewriting the book under request from her Picador publisher.

Characters of Color and Perspective

“We can increase diversity in the publishing industry by normalizing books with characters that aren’t white.

When a white character is the star of a children’s book, it’s universally accepted and deemed appropriate for children of ALL races.

While I create stories that feature black characters, that doesn’t mean someone who’s not Black can’t learn from or appreciate those characters.

It’s important for all children to read books featuring diverse characters because it challenges them to look outside of their own personal experiences and their personal appearance.

It is incredibly difficult for black authors to gain visibility and sales because what we offer is automatically viewed as being exclusively for black consumers.”

In 2020, a Young Adult author—L.L. McKinney, a woman of colour, started a hashtag #PublishingPaidMe, calling for authors to be transparent and share the advances they received for their traditionally published books.

An article on Vox.com reports:

“Jesmyn Ward, who is black and also the first woman ever to win two National Book Awards for fiction, tweeted that after she won her first National Book Award in 2011, she had to “wrestle” her way to a $100,000 advance. N.K. Jemisin, who is black and the only person ever to win three Hugo Awards in a row for her Broken Earth trilogy, got an advance of $25,000 for each volume in the series. Her follow-up trilogy, Great Cities, netted her an advance of $60,000 per volume.”

The report continues to reveal that Chip Cheek a white male received an advance of $800,000.

Diversity and Inclusivity in Publishing: Racism

Eliana West, author and founder of Writers for Diversity.

With thanks to Eliana West for her contributions to this post.

Eliana West is the founder of Writers for Diversity. Since its creation in 2017, Writers for Diversity has provided a safe space for thoughtful and respectful dialogue, growing to over 1,000 members from around the world and encompassing all genres. Her life experience and DEI training fuels her commitment to an empathetic approach in her engagement with writers. Eliana West writes contemporary interracial romance, her Heart of Colton series is published through Tule Publishing.

“Why do you want to write this character?”

My response when I see this question or another iteration of the same passive aggressive, creative suppression is visceral. My heart rate increases and I start to shake. I do my best to breathe deeply and look for empathy and grace.

Whatever you want to call it, concern, activism, or being an ally, when you ask this question, you are smothering creativity.

As writers, we are artists. We create. No one has the right to demand you justify your imagination.

Whew, that was a pretty strongly worded opening, wasn’t it? I wrote this out of anger a few weeks ago. Then, when I was asked to write this article, I went back to my… let’s be honest; I was ranting, something that, if you know me I try really hard not to do. I still felt that my point is valid. There was more to my original rant, but I’m going to stop here, because rants don’t help and I want to get to the positive stuff.

Should you write diverse characters? Are you the “right” person to tell this story?

Yes, you should absolutely write characters as you visualize them when you are crafting your story. Will there be characters that come to you that might be challenging to write or that you might be uncomfortable writing? Absolutely. But we need stories with characters and worlds who reflect the world around us and that world is increasingly diverse and the world we’d like to see.

According to  U.S. Census Bureau data in 2013, about 9 million Americans chose two or more racial categories when asked about their race. The 2010 census data estimates that there are around 9 million Americans who identify as bi-racial. The population of adults with a white and Asian background increased an estimated 87% between 2000 and 2010 according to the same census data.

Writing diverse characters is humble work. You cannot come into it without respecting other cultures, experiences and identities. You must be willing to admit to your own bias and have a willingness to admit when you’ve made an incorrect assumption. It can be hard to admit when we are wrong, but you will be more successful in this journey if you can.

Now is a good time to share one of my favorite quotes.

“Perfection is impossible but space to grow is always possible.” Stacey Abrams.

If you are committed to adding more diversity into your work, and you should be, then you must allow yourself space to grow. This can often mean that you will be uncomfortable.

Get comfortable being uncomfortable. For some writers it may even feel as if you are learning to write all over again. When we learn a new skill, we are often a little clumsy in those first few attempts. Making mistakes is part of the process. If you approach your task with honest intention and with a willingness to learn, you can do this. Be kind to yourself and give yourself permission to become familiar with this unfamiliar landscape. You may find yourself facing prejudices you did not know you had. Take the time to examine your own belief systems to understand how they might influence your character’s actions.

Instead of asking if you are the right person to write this story, ask yourself what your intention is with your writing and what impact you hope it will have.

In 2001 director Spike Lee created the term Magical Negro. The Magical Negro is a is a trope where the character is typically, but not always, some way outwardly or inwardly diverse, either by race, ethnicity, disability, sexual orientation, or social constraint. This character often has no past and sometimes doesn’t even have a name. Their only purpose in the story is to help the White protagonist.

This is just one of many tropes that you need to be aware of when you are writing diverse characters. Think of this as an opportunity to change our world for the better by writing stories that destroy stereotypes rather than reinforcing dangerous tropes.

Let’s be honest, this can be scary. Right now we are living with a heightened awareness of racial issues. Political Correctness, Cancel Culture, and Critical Race Theory may make you feel intimidated to reach out for help.

This can all feel overwhelming at first. Don’t get discouraged, there are tools and resources out there to help.

Diversity and Inclusivity in Publishing: Resources for Authors

We Need Diverse Books is a great platform for anyone writing YA or Kid Lit. Writing with Color is an incredible blog on Tumblr, with resources for writing characters of color. Salt and Sage Books have an extensive list of sensitivity readers and my group Writers for Diversity, provides a safe space for dialogue and provides resources for writers who want to write outside of their own experience.

Let’s stop and talk about experience for a minute. Another statement that makes me twitch is when I hear someone say you can only write your “lived experience”.

In an increasingly multicultural society what does “lived experience” mean? Our friends and family often come from different backgrounds, ethnicities, religion, sexual orientation, and ability. Our lived experience is more than just racial identity, but comprises all the people and experiences who have influenced our lives. Please, do not let anyone use this argument to curtail what you write. Many of you have diversity in your lived experience that can inspire you in your writing.

Now, take a deep breath and repeat after me.

It’s going to be okay. You can do this.

Diversity and Inclusivity in Publishing: Questions to Ask Yourself

Sunny Singh has created an excellent Twitter thread with questions for you to ask yourself when creating diverse characters:

How to Write Black Characters: An Incomplete Guide by Salt and Sage Books

Writing the Other: Volume 8 by Nisi Shawl and Cynthia Ward

White Fragility: Why It’s So Hard for White People to Talk About Racism by Robin DiAngelo

How To Be an Antiracist by Ibram X. Kendi