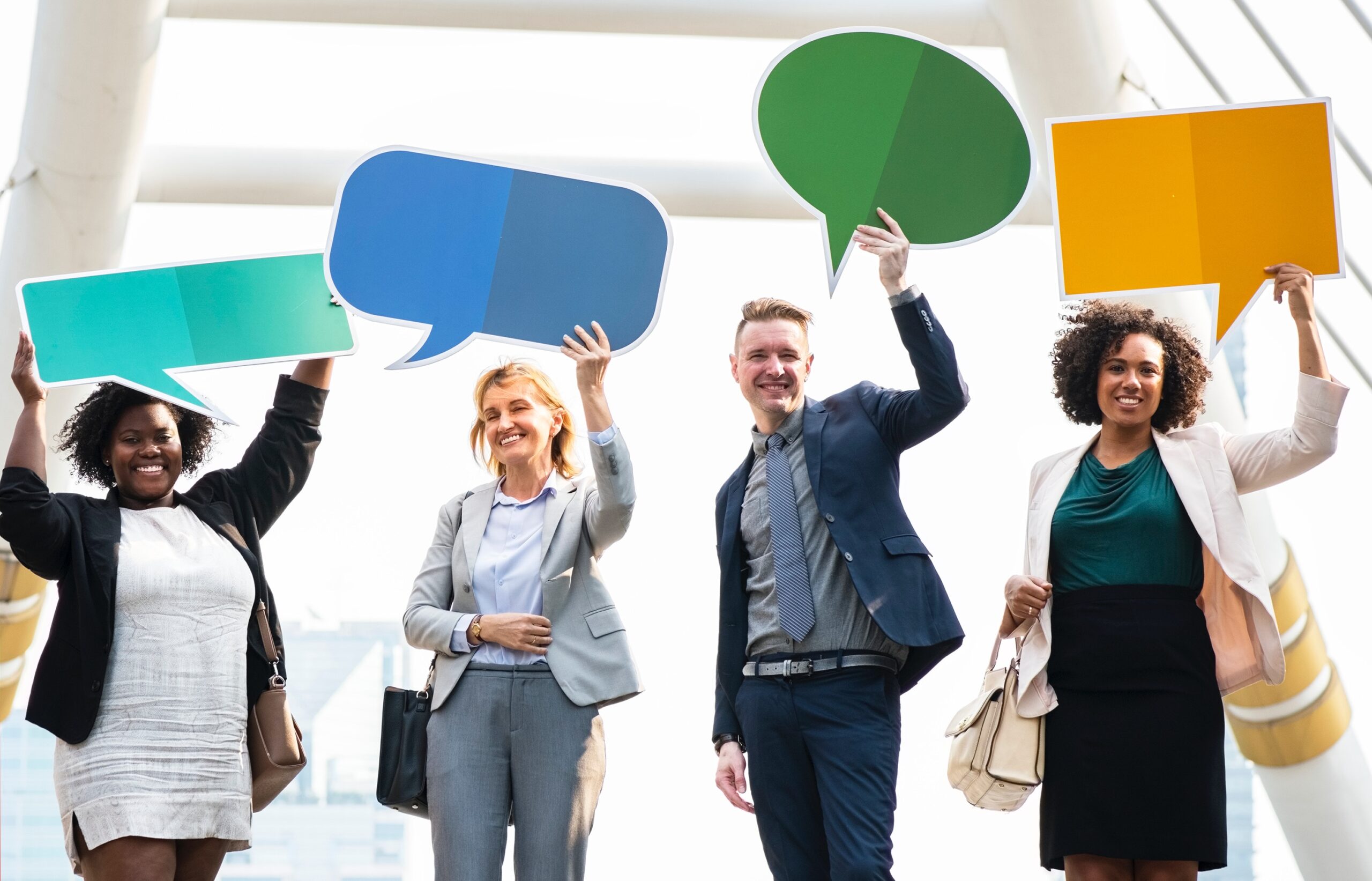 Opinion: If You Need Fancy Dialogue Tags, There’s Something Wrong with Your Writing

Dialogue tags are always a controversial topic among writers. While some like to ring the changes with a wide vocabulary, Giacomo Giammatteo, indie author of over 70 self-published books, makes the case for keeping dialogue tags simple, and explains his reasoning. See if you agree…

In an attempt to sound writerly or make it appear as if they are experienced authors, many writers use ridiculous dialogue tags when they shouldn’t.

What do I mean? The answer is simple.

I’m going to provide a list of acceptable tags (a list provided to students for reference), but it’s not a list I’d recommend using. (I looked through some published books and found every one of these, and it didn’t take me too long. I had to peruse about 18 books, but eventually I found them all.)

A side note here: many English teachers advise using some of, if not all of, the tags below. I don’t.

It’s a hotly debated issue, but in my opinion, if you feel the need to use a dialogue tag other than the basic, it means you haven’t worked hard enough to clarify things. You need to rewrite.

Also, for the sake of clarification. I will refer to name tags and descriptive tags in this post.

Name tags are what they sound like—when the writer uses a character’s name to let the readers know who is speaking.

Descriptive tags are when the writer uses an action either before or after the dialogue to clarify what a character is doing.

Why such a difference? Because the others are not needed, and, some say, make the work appear ridiculous. Let’s look at it. 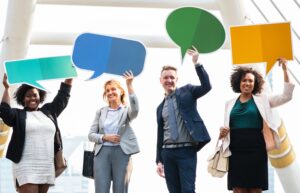 How many dialogue tags does a writer really need? Fewer than you might think… (Image by rawpixel via unsplash.com)

What Is A Dialogue Tag?

What is a dialogue tag for? What purpose does it serve?

A dialogue tag is typically used to let the readers know who is speaking, and what mood they’re in.

It’s tough work, and because of that, many writers rely on excessive dialogue tags (usually stemming from laziness), hoping that the tags will do the work for them.

An example can be seen in this, taken from a mystery book I recently read.

Get out of my house! Susan roared emphatically.

Punctuation—Though exclamation points are not my favorites, and should be used sparsely, it would have been fine in that sentence; however, if the author kept the exclamation point, they didn’t need the rest.

Get out of my house! would have been sufficient, and, in fact, would have had more impact in my opinion. I already said we didn’t need to know Susan was speaking, and the use of the exclamation point would have sufficed as a tool to replace the *roared, and, emphatically.*

Readers don’t need to be told—with tags—that a character *laughed, cried, shuddered, sobbed, felt fear, or was ashamed, or experienced any other emotion.* They should know by the dialogue itself, or the actions of the characters while they speak.

What do I mean?

Suppose you’re reading a book where the husband and wife are arguing, and you come to a scene where one of them turns to the other and says,

Grow up, she said, then slammed the door as she walked out.

By the grow up comment, we know she is accusing him of acting infantile. We know it’s her speaking by the use of she, and we know she’s pissed by the way she slammed the door, and then walked out.

We could have said, Grow up, Susan said, furiously.

But we didn’t need to use her name again, and if we use furiously, the reader is left to imagine what furiously is. In the first example, we’re providing them with the perfect example–the example we want of her slamming the door. It’s an image the reader can imagine and most likely empathize with. It’s one they’ve probably experienced. And nothing could be better than that. Give the readers examples that they can relate to.

If I want to evoke an emotion—say fear or panic—I put the reader in a situation like a mother who loses her child at the beach or a park or a carnival. The picture below shows the panic of a lost child. 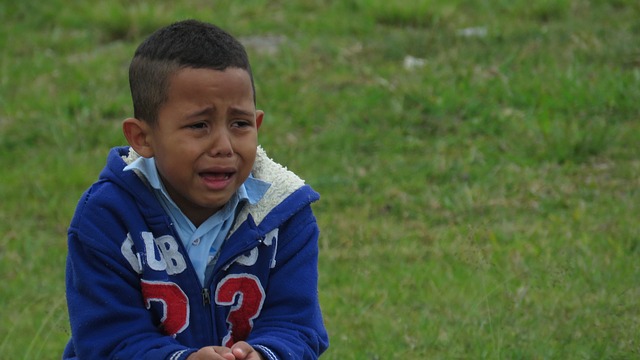 Readers can then picture that woman looking around, eyes bulging, panicking, screaming the child’s name, heart racing, throat tightening. They can empathize with this because they have either experienced it themselves, or they know someone who has, or they’ve at least seen that kind of situation in a TV show or a movie.

On the lighter side of things. If you want a writing rule to follow. I know you’ve all heard the rule of show, don’t tell. This is no different.

When you use dialogue tags (especially adverbial ones), you are telling the readers how you want them to feel. It’s not much different than having a stagehand holding up signs during the performance of a play that have written on them in big, bold letters: It’s Time To Cry.

You don’t need to tell the readers that your character left the room slowly (or walked slowly down the hall), instead say, she tiptoed out of the bedroom, or she crept down the hall, or she climbed the stairs, one at-a-time, careful not to make them creak. 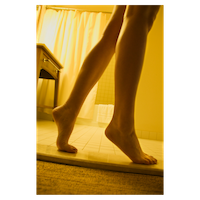 Help the reader visualize the action

I’m willing to bet that at one point in their lives, every reader, or most of them, has tried going up a set of stairs without them making a sound. This is an action they can imagine, they can visualize. It will have a far greater impact on them then ‘went up the stairs slowly’. The same applies to tiptoeing and ‘walked down the hall slowly.’

I’m not crazy about dialogue tags in any sense, but I try to avoid adverbs like the plague. (How’s that for a cliché?)

How To Avoid Adverbial Dialogue Tags

I do my best to let the words speak for themselves. Picture yourself blind, and you’re sitting in a room with a group of people. You should be able to tell who’s talking by things other than sight:

One Last Look At Dialogue Tags

Let’s examine that table of tags and look at them one-by-one to see which ones are useful.

Can you smile a saying, grin a response, giggle or bark a reply?

Instead of saying or telling a character interrupted someone, show it by using an em dash. Or make use of the ellipse to indicate missing words or a pause in thought.

Don’t tell your readers that someone mumbled, have the other character ask what they said, and then clarify by saying you were mumbling.

Ted lowered his head as he turned his back to his mother. I’m going to the mall.

What did you say, young man? Speak clearly, and don’t try to hide what you’re doing. Mumble again when I ask a question, and you’ll go to your room. Understand? Was that clear enough?

If I were a reader, I’d understand what happened there, and it would be more interesting than saying he mumbled. I’ve had teenagers. I can relate.

Using words like bragged or demanded are also redundancies. If you have a desire to say someone bragged then they obviously must have said something positive about the individual, so we can infer that they were bragging. The same thing with demanded. The dialogue will (or should) make it obvious.

Let The Dialogue Speak For Itself

The table listed above, and unfortunately, too many books, are loaded with examples of tags that are not needed. Try to remember that you almost never need a dialogue tag to explain your dialogue. Let the dialogue speak for itself.

Think about it another way. You don’t have a third party following you around explaining your dialogue and actions, do you? I hope not, because it would be ridiculous. Imagine the scene—you’re at the table and holler across the kitchen to your wife. What the hell’s for dinner? Then a third party shouts, he said impatiently, and with anger.

Trust me, your wife would know by your tone and your words, that you were impatient and angry, and you’d be fortunate if she didn’t hit you with a frying pan. But the point is, she didn’t need a third party to interpret for her.

So the next time one of your characters are tempted to laugh, or grin, or smile an answer—think again, and maybe just have them say it.

OVER TO YOU What is your preferred practice for dialogues? Do you have any pet hates or favorite gaffes to share? We'd love to hear them!

#Writers - let the #dialogue speak for itself, says @JimGiammatteo, and keep your dialogue tags to a minimum - read this memorable guest post for his top tips. #writing Click To Tweet

Writing: Putting the Fun into Punctuation