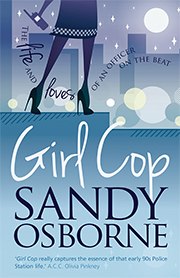 Writing: Could You Turn Your Day Job Into A Book?

One often overlooked advantage of following the common advice to “write what you know” is that writing in your comfort zone can help you build confidence to diversify later into other areas. British indie novelist Sandy Osborne describes how she drew on her day job as a police officer for her debut novel, Girl Cop, the first in a series, of which the second is due out later this year.

No prizes for guessing what Sandy Osborne does for a living!

They say ‘write about what you know’, so when I had the urge to write a book, it was obvious to choose the setting of a police station as the background to my story, and to draw on my 20 years experience as a serving officer.

There is undoubtedly a public hunger for insight into the police service, but I knew I didn’t want to write a psychological crime thriller, and being a big Bridget Jones and Shopaholic fan, I wanted my story to appeal to that readership.

My aim was to produce a feel-good rom-com – the kind of book I look for in the airport to read on a sun lounger on the first few days of my holiday! I knew this would give me the opportunity to include some amusing anecdotes and characters from my time in uniform, and to illustrate the fantastic camaraderie we enjoy in the police.

I hope that Girl Cop also shows the human side of policing – that we have normal lives too, and that we are affected by what we do and see, and what we have to tolerate. let alone the impact of shift work on our lives.

How Much is Fact, How Much Fiction? 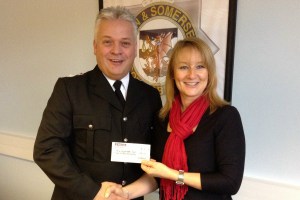 Sandy donates a percentage of her profit to the Police Dependants’ Trust – pictured here presenting a donation to District Commander Geoff Spicer.

Although Girl Cop is a fictional tale, I obviously drew on my experience in creating the story.

The incidents my heroine deals with are all generic jobs that we would deal with on a daily basis: burglaries, drink drivers, sudden deaths. Surprisingly, even though these are ‘bread and butter’ incidents for my colleagues, they have apparently enjoyed reading about them as much as the non-police readers.

Alongside this I was determined that all police procedures would be accurately reflected. I find myself screaming at the television when I watch dramas that get it wrong! I really enjoyed reinventing the scenarios and searching for the right words to convey the atmosphere and emotions.

It was empowering to take the outline of an incident and have the freedom to develop it exactly how I wanted it to. Many of the storylines changed as I typed.

One thing I particularly wanted to convey was the misery of the effect of bullying. I suffered at the hands of a bully as a probationary officer, and whilst none of the bullying tactics I describe in the book happened to me, I think I have successfully depicted the sheer misery that such cowardly behaviour causes – and that bullies get their come-uppance in the end. I guess it was also a bit of therapy for me being able to write about it! 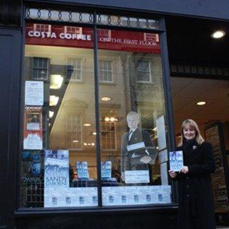 Sandy Osborne outside the Bath Waterstones where she launched her book – spot the cardboard cut-out of her in uniform in the window!

Writing about the beautiful Heritage City of Bath, that I know so well was also very rewarding. Picking locations for certain storylines was fun, but researching them to make sure that it was true to 1993/4 was a challenge at times. (I did have a reference to the Jane Austen Centre but had to delete it after discovering that it only opened in 2002.)

The setting has been much appreciated by my readers, who genuinely seem to have enjoyed reading about places they know and can relate to. And of course name checking places like the fabulous Bath Priory Hotel and Spa had the unexpected knock-on effect of great publicity for us both, with them offering a meal for two at my launch and subsequently a mini break alongside a review in My Weekly magazine!

Finally, having achieved a level of success writing my first book from my own experience, I now have the confidence to consider writing outside my field of knowledge. Watch this space!

Has your day job inspired you to write about what you know? If so, how has it worked out for you? Please feel free to share your experience via the comments section.

“#Novelists – should you write what you know? Here's why @girlcopnovel thinks you should: https://selfpublishingadvice.org/day-job/ via @IndieAuthorALLi”