In this week’s Self-Publishing News, ALLi News Editor Dan Holloway fills us in on the latest with a campaign to cut tax on ebooks in the UK, Wattpad’s new publishing partners, and Barnes & Noble’s new owners.

Strange but interesting things seem to happen a lot. I am not sure whether I notice them because I’m a writer or they happen because I am. But as this update goes to press I will be talking to an American indie band, Whitherward, who got in touch because they’re filming a documentary of their tour. They are asking people “is music a language?” It’s a great idea, and a fascinating question. And as a writer who regularly collaborates across media, I still have no idea what I’ll say. 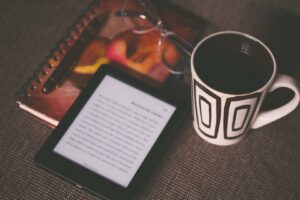 One of the thorniest issues in digital publishing is sales tax. First there is the fact that it exists at all. Most countries exempt print books from sales tax. Many do not apply the same principle to ebooks. That can exacerbate claims of strange-seeming pricing ratios. Second, anyone who has sold ebooks in Europe will know what a mess the sales tax system is. The responsibility falls on the retailer to identify the origin of the buyer and ensure the correct sales tax is applied. Last year, the European Union passed a regulation that promises to simplify things. It allowed countries to choose to reduce or eliminate sales tax on ebooks. Some have. To date the UK hasn’t. That has led to a new campaign from the UK Publishers Association called “Axe the Tax”. Maybe we are getting closer to a Europe in which tax on ebooks is simple – their simply isn’t any.

I feature Wattpad on a regular basis. That’s because they are always doing something interesting. In January, I brought you the story that Wattpad were turning publisher. They will be plucking the most promising books from their platform and giving them professional editing and all the trimmings. Not to mention the rather juicy prize of Wattpad’s full promotional weight. Wattpad have now announced their delivery partner for Wattpad publishing in the UK. Penguin Random House.

We have mentioned Abacus, the collaborative tool from PublishDrive, a few times. Abacus is now fully live for all PublishDrive users. This means calculating royalty splits will be done automatically between collaborating authors and illustrators, with real-time payments.

This week Barnes and Noble finalised its buyout by Elliot Advisers. Part of that deal is the installation of James Daunt as CEO. Many people credit Daunt with turning around Waterstones in the UK. Many of Daunt’s actual booksellers, and others in the trade, are not so full of love. Staff at the chain are currently involved in a high profile campaign for a living wage. Interestingly one of Daunt’s first suggestions in his new post is that a new Nook might be coming out this year.

It was particularly interesting to read Cory Doctorow’s take on the new look chain. A notorious anti-establishment writer, Doctorow has said that Daunt will make the US’s surviving book chain feel like an indie store. And talking of indie stores, the American Booksellers’ Association is struggling to find a way of taking on Amazon. The problem, as they see it, is the lack of an online storefront that competes. The only one that really exists, IndieBound, is not fit for purpose. We hear similar complaints in the UK where all we have is Hive. The problem is, no one knows what to do about it.

A Last Word on Libraries (for now)

We’ve had a lot of stories about libraries recently. Thank you to Jane Davis for this one. A public library in Wichita is printing receipts showing how much borrowers have saved by using a library not a bookstore. One receipt shows a saving of more than $100,000! I have seen writers asking of there is an equivalent to show how many royalties writers have lost. And I guess those two things side by side sum up the current debate.

I’m delighted to announce some news from ALLi. From this month, our regular self-publishing salon podcasts are getting even fabulouser. The #AskALLi Self-Publishing Broadcasts will bring to indie authors, as they always have, the latest tips and tools, news and views. As before, ALLi Director Orna Ross will present the weekly show but we’ll have new topics and co-hosts and an expanded inspirational indie author slot.

This fits rather neatly with a fascinating final news item – Google is now transcribing podcasts. That should make your podcast content much easier to search.

I’d love to know what you think on the library question – a wonderful way to increase literacy or a loss of earnings already strapped authors can ill afford? Or both? Let us know in the comments below.