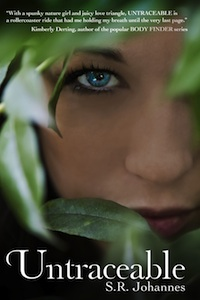 When writing for teen girls, I think it is critical for young adult authors show strong, flawed girls that readers can relate to and think to themselves, “Maybe I could do that.”

In Untraceable, I set out to create a strong girl MC who chooses to be tough in the face of adversity, yet she shows signs of weakness and flaws that hopefully draw the reader in to her journey.

Having strong teens in young adult fiction is important today. Here are some things to keep in mind when creating tough girls.

Make them Tough yet Relatable.

It is important to create a character that is tough, yet feels very real. I think the hardest part of creating Grace was making her strong in survival and self-defense, but not too “superhero-ish”. While she can take care of herself and pretends not to need anyone, it’s her love for her father that forces her to act tougher than she might really be.

Think about the toughest girls in fiction, they always reveal a tender quality to draw you in, yet a quality that doesn’t threaten their toughness. It fuels it.

In Collins’ Hunger Games, Katniss took care of her sister by volunteering to take her place. Her love for her sister keeps her real and actually drives her to be tougher so she can survive for her sister. In the classic Julie of the Wolves, Miyak runs away and survives in the Tundra; yet, in the beginning she faces starvation. And in Lowry’s Number the Stars, AnneMarie must put aside her fear to evade Nazi soldiers.

These all show girls with a level of toughness, yet they still remain endearing and flawed.

Put Tough Girls in the Real World but Make it Believable

Many teen girls are set in fantastical or dystopic worlds. Many of those have special powers. I think creating strong girls that are in our current world is critical. Girls need to see that they can be tough and strong. Today.

In Untraceable, I wanted to keep Grace in a contemporary world. To show how a teen girl can fight the officials and a corrupt system in today’s society as well as survive in the woods on her own. I think girls need to know they can stand up for what is right and build strong skills. I also gave her talents and skills that would be useful in her struggle. The fact that she grew up in the woods makes it believable when she has to survive there.

In Heist, Ally Carter arms Katrina with skills that help her succeed. She’s grown up around thieves and cons, giving her the ability to persevere and the knowledge of jewels. And in Don’t Turn Around, Noa’s hacking skills are critical in order for her to avoid death and solve the mystery.

If you put your teen MC in the real world, be sure to give them the necessary skills and real talents to be tough and believable.

Get them Tough on Boys

Teen books need to show girls there’s more to life than just boys. I think romance is critical in young adult books (with all the hormones swirling around) but it doesn’t have to be the central theme. I think some authors may underestimate teens assuming lust is all they care about. I think teen girls think about more than that.

In addition to having boys take a back seat, I think we should offer our characters the good boys. In Untraceable, I wanted Grace to have two nice guys to choose from – each very different from the other. Though one is more mysterious and one is labeled a “friend”; at the core, they are really great guys. Both treat her with the respect she deserves  – neither is the “typical bad guy” we see in a lot of books today.

In Hunger Games, Gale and Peeta are cute, solid guys. Each offers Katniss something different but not something toxic. In Twilight, though some may disagree, Edward and Jacob want the best for Bella and both sacrifice for her. And in Matched, Cassia is torn between Ky and Xander, both strong guys and both adore her.

To me, tough girls need to find a place in teen fiction. Characters that embody the independence, loyalty, and toughness as well as flaws – that I think we should encourage and celebrate in all girls.

After earning an MBA and working in corporate America doing marketing for over 15 years, S.R. Johannes traded in her expensive suits, high heels, and corporate lingo for a family, flip-flops, and her love of writing. She lives in Atlanta, Georgia with her dog, English-accented husband, and the huge imaginations of their little prince and princess, which she hopes- someday- will change the world.