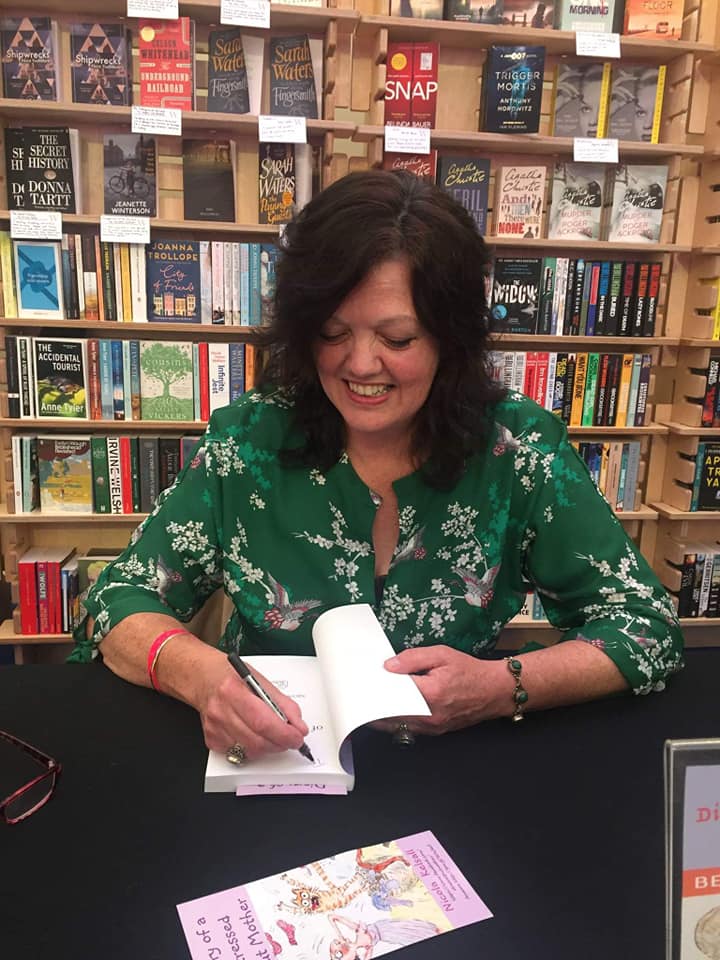 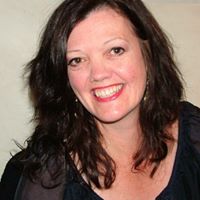 Indie author Nicola Kelsall was delighted to appear at the Cheltenham Literature Festival 2018, ian exciting example of a litfest opening up to indie authors

Artist and indie author of the satirical comedy series Diary of a Stressed Out Mother, ALLi member Nicola Kelsall could hardly believe her eyes when she saw those six little words on last July in an email she nearly didn’t open: “We would love to invite you…”

We are delighted to welcome her to the blog today to share with us her experience of speaking at the Cheltenham Literature Festival, the UK's biggest,  highest profile and longest-established litfest, in the company of bestselling trade-published authors and A-list celebrities – a great story for ALLi's “Open Up to Indies” campaign.

In May 2018, when I saw the call for submissions pop up on Twitter asking for local authors to submit their work to the ‘Locally Sourced’ project of the next Cheltenham Literature Festival, I have to admit that, at first, I ignored it. It said:

‘Are you a Gloucestershire-based author looking to showcase your work at one of the largest and most prestigious literature festivals?

My first instinct was to immediately dismiss the idea of submitting one of my books:

Anyway, after a day or two, I thought: 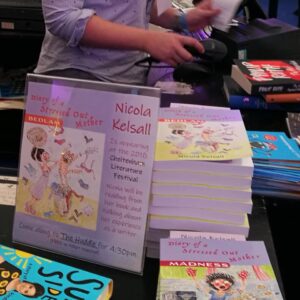 Nicola Kelsall's books, on sale at Cheltenham Literature Festival after her talk

“Well, why not? If you don’t have a go at these things, you’ll never know, will you? It’s no good being a shrinking violet! If you want to get anywhere in this world, you have to make it happen! Self-promotion, whether you like it or not, is the only way. (Unless you are vastly wealthy, or have friends in high places of course, which in my case is a resounding ‘no’ to both).”

So, I wrapped up my precious book, Bedlam, the first in my Diary of a Stressed-Out Mother series, posted it off in time for the 21 May deadline, and tried to forget all about it. I honestly didn’t think I’d have a chance. However, six weeks later, buried in amongst the daily glut of advertising, school and work-related emails, I suddenly saw the words ‘locally sourced’ – a shining beacon within the litany of mundanity (I know that’s a bit dramatic, but it was a very exciting moment!)

Local Help from Other ALLis

My monthly meetings with ALLi members at our local authors' group in Cheltenham’s wonderful Anthology Bookshop has been an inspiration to me since I joined ALLi over a year ago, and I have found the friends I have met there to be incredibly supportive and welcoming. We have a wonderful selection of very experienced people with a plethora of good advice and understanding for authors new and old. I have only been writing for four years, so I’m still a novice – particularly when it comes to the business side of self-publishing.

I must say that I would not have had the courage to submit anything to anyone without the support of ALLi and ALLi members.

It’s hard to keep going on your own, and I can’t thank them enough for the great advice, much-needed reassurance, and chance to connect with other like-minded souls. They were all delighted for me too, which was lovely.

Throughout the summer, as the date of my appearance got closer and closer, and I saw it in black and white, printed in the brochure (another pivotal life- affirming moment!), I began to get extremely nervous about the whole idea of speaking to a crowd of people for what suddenly seemed like an eon (half an hour actually). The thought of having to stand up and talk about myself was, frankly, terrifying. (My friends will be rolling their eyes in disbelief when they read this, because I can normally talk for England.) After agonizing for far too long, a week before, I decided to request an interview instead. I produced a set of questions, practised my answers, and with great relief, actually began to look forward to it again. 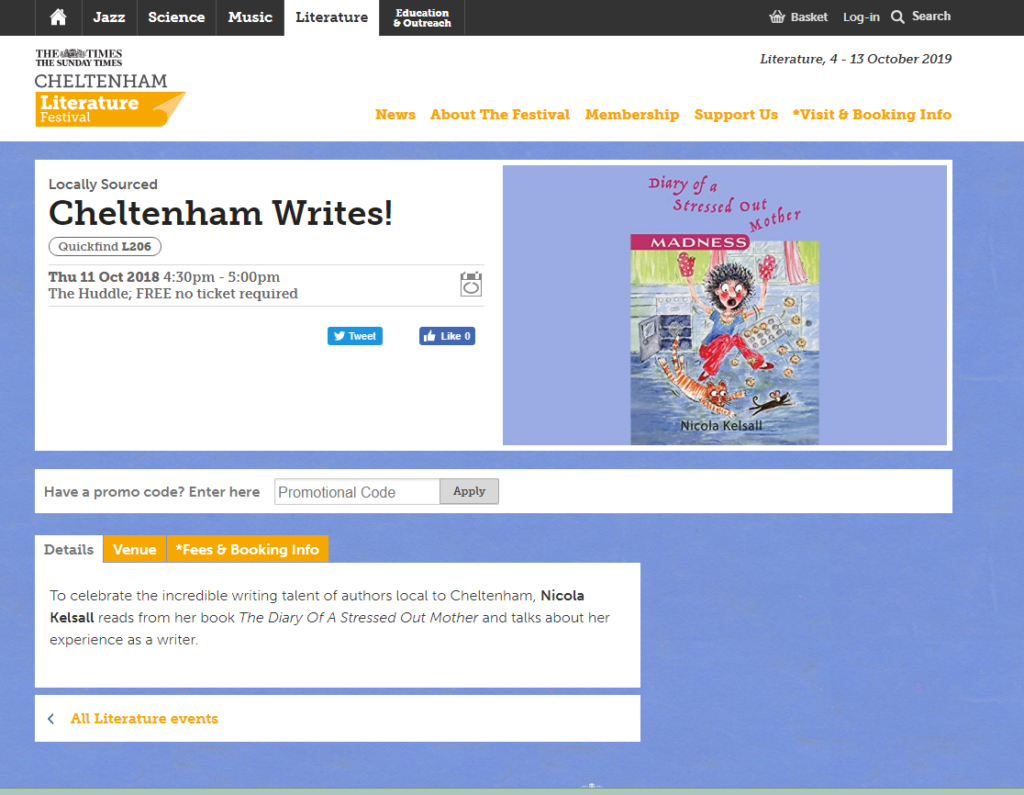 My Big Day at the Cheltenham Literature Festival

I must have changed my clothes at least four times, but finally, I set off in my car and arrived with an hour and a half to spare (there’s nothing worse than parking-space panic when you’re already stressed!) I entered the Writer’s Room with trepidation and waited nervously. The place was buzzing with famous faces and press activity. I was offered free cake, coffee, wine, beer… and all I could face was water! (My friends certainly won’t believe that bit!) Thank goodness my interviewer, Lindsay, helped me to feel calm and relaxed as I prepared to go on. Then, suddenly, it was time… 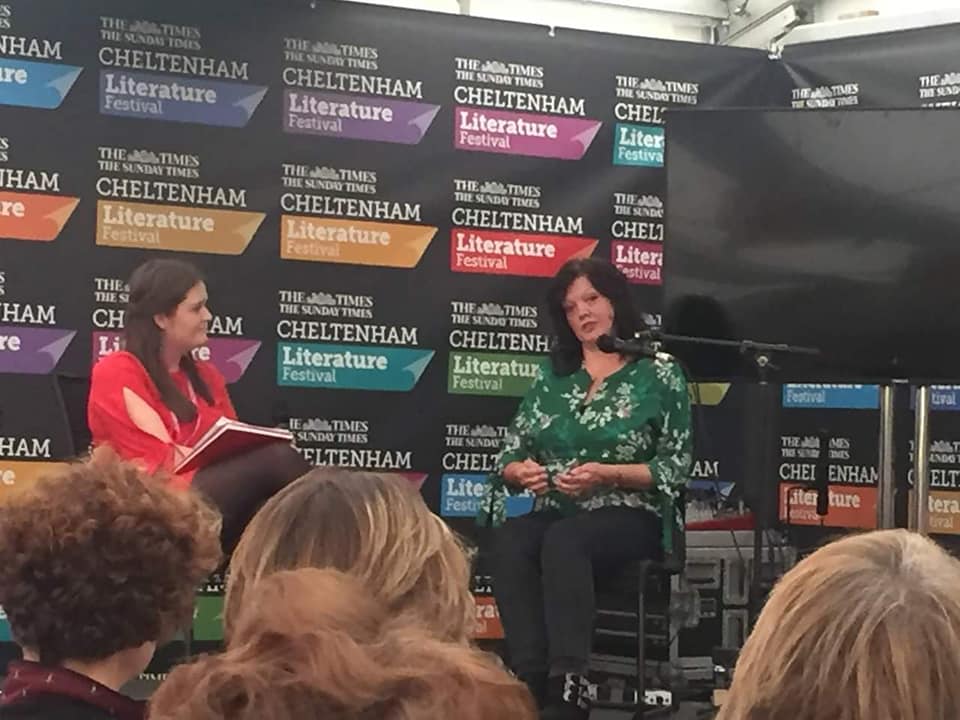 It was slightly surreal, being on stage with a sea of faces looking at me. I hadn’t had that experience since I was in the school play, which was more than a few years ago, I can tell you. But, the lovely Lindsay was used to beginners, and once I got going I really enjoyed it. My allotted half hour went far too quickly and people seemed to really enjoy it (they laughed in all the right places anyway!) 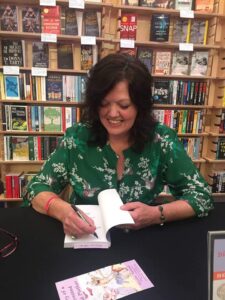 Afterwards. I was sent through to the book shop, where I was thrilled to discover my table was between celebrity gardener Monty Don and bestselling novelist Patrick Gale, both of whom were furiously signing books and chatting to their many fans. Since my queue was rather shorter than theirs, I had plenty of time to think about my plan to chat casually to Patrick Gale over a glass of wine in the Writers' Room later, and my other decision to buy Monty Don’s book for my mother, and ask him to sign it with a personal message. Anyway, both ideas were completely scuppered when I realised that Patrick’s mountain of books looked as if they’d take a month for him to sign, and Monty Don had disappeared in a puff of smoke!

What I Learned from the Experience

So, what did I learn from my first foray into the world of celebrity and the celebrated…

Oh, and next time to remember to bring a decent pen for signing books – the My Little Pony biro found in the deepest recesses of my handbag was not cool!

(For more information about ALLi's campaign to Open Up to Indie Authors, click here.)

How #indieauthor Nicola Kelsall aka @stressoutmother came to appear at @CheltLitFest & what she learned from it - a great role model for our #PublishingOpenUp campaign! Click To Tweet

Nicola Kelsall is a writer and artist living in the Cotswolds in England and the author of a series of satirical comedy novels in the Diary of a Stressed-Out Mother series. She is currently writing the third book, "Chaos". She recently appeared at The Cheltenham Literature Festival. For more about Nicola's writing, please visit her Facebook page, www.facebook.com/stressedoutmother.